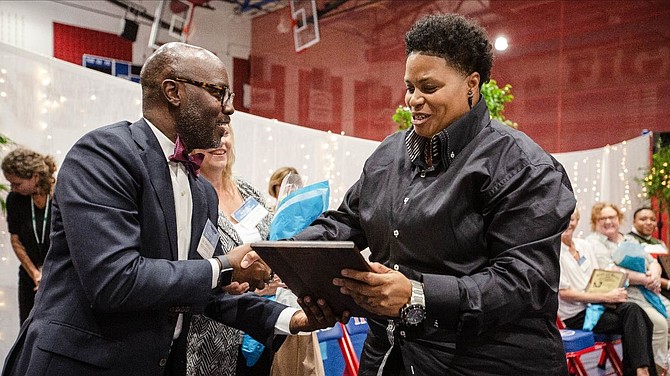 Nine individuals were recognized for their athletic excellence, in addition to members of the 1957 Parker-Gray Boys Basketball Team, who helped pave the way for the desegregation of Alexandria City Public Schools.

“These athletes represent our Titan spirit and have demonstrated first-hand not only great determination but also the values for which T.C. Williams stands,” said ACPS Director of Athletics and Student Activities James Parker.

Among the honorees was Julius Campbell, a member of the 1971 undefeated Titans football team. Campbell was honored posthumously following his death earlier this year. Titans coach Herman Boone, a past honoree, was amongst the 250 guests who attended the annual celebration.

The event included a reception for inductees, their families, members of the School Board and the Athletic Hall of Fame Committee, which selects the inductees for approval by the Alexandria City School Board. The T.C. Williams JROTC presented the colors and escorted inductees through a sabre arch.

“These athletes represent who we are as a city and a school,” said ACPS Superintendent Gregory C. Hutchings Jr. “They represent Alexandria’s past in the form of the ’71 Titans who stood up for integration, our present students who stand up for equity and know it is not yet a finished task, and our future Titans who will continue the work to see an equitable learning environment in all schools for all students.”

Glenn Williams, who finished his high school football career in 1985 holding six school passing records, was honored for his football accomplishments alongside Campbell.

Parker-Gray High School Basketball Coach Arnold Thurmond, who distinguished himself on Omaha Beach during the D-Day Invasion, was inducted alongside the school’s 1957 Boys Basketball team that he coached. Also recognized was former ACPS Athletic Director Don Riviere, who was inducted by the National Association of Athletic Directors to their Hall of Fame last December.