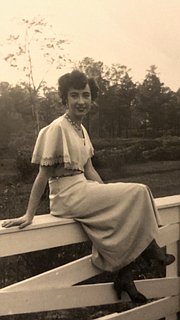 Virginia leaves behind numerous cousins and nieces and nephews. She was the remaining matriarch of the Cooper family, often sending well wishes and photos to every family member and their children. She had great joy in sharing her family history and acknowledging the lives of others.

Virginia was born and raised in the Woodlawn, Mount Vernon area off Richmond Highway and Cooper Road, so named after her father the late Oliver Jacob Cooper. Cooper Street was named after her late Grandfather, Frederick Cleveland Cooper; the Coopers were early developers in the Woodlawn, Mount Vernon area. They built many homes and lodging establishments; The Willows and the Rainbow Tourist Court in the 30s. The property were sold in the 60s and Cooper Center, along with McDonalds is now where her family home used to be.

She graduated from Mount Vernon High School in 1949, where she said “I Virginia Marie Cooper, leave the answer for getting through Mount Vernon, perseverance, ability, and a seat behind.”

She loved all different kinds of music; and often recalled her childhood being from a “singing” family. She and her sisters would harmonize and sing while doing the dishes. She said June was contralto, Marian was alto, and she was soprano They often sang as family, and grandma played piano. They would also sing Irish songs; she was very proud of her Irish heritage, and the Irish Blessing was one of her favorites

She got her first job at Fort Belvoir as a clerk typist. She had an honorable long career of 31 years with the Federal Government serving as a procurement professional and retired in 1987 from the Defense Fuel Supply Center, Cameron Station, Alexandria, VA. She loved our country, and proudly displayed the American flag on every occasion.

She lived in Alexandria for many years, and then moved to Sarasota, Florida, so that she could be near the Gulf of Mexico that she loved dearly. She enjoyed watching the sunsets, the warm Florida sunshine, and the crystal blue waters. She took long walks on the Siesta Key beach. It was her favorite place to sit and meditate. She loved the soft silky sand and collecting seashells.