‘An Incredible Play and a True Story’: Woodson High presents ‘Letters to Sala.’ 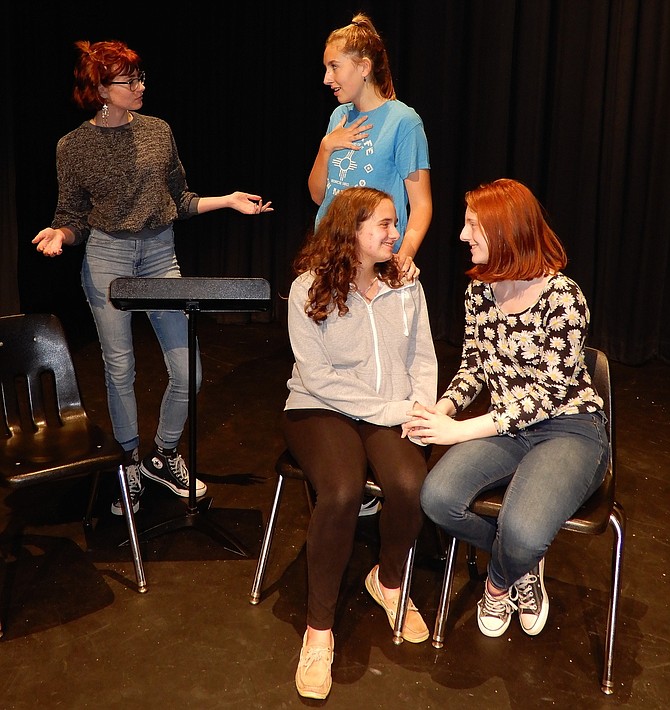 A story of courage, defiance and survival – that’s “Letters to Sala,” and it’s Woodson High’s upcoming Cappies play. Woodson is the first school in Fairfax County to do it, and the actors are determined to make it as authentic as possible.

“This is an incredible play and a true story about a woman named Sala Garncarz in 1940 and 2005,” said Director Terri Hobson. “She’s a 16-year-old Jew in Poland during the Holocaust. After the Nazis invade Poland, her family receives a letter saying her older sister must report to a labor camp.”

The letter claims she’ll be paid for six weeks of work – which is a lie – but if she doesn’t go, her family will have to pay a huge tax. However, because her sister is frail, Sala goes in her place. “As part of the Nazis’ propaganda, they said the workers – who are really slaves and prisoners – would be allowed to send and receive letters,” said Hobson. “However, they’re forbidden to keep them – but Sala keeps hers, anyway.”

Sala buries them, hides them in her clothing and sometimes has others hide them for her. “The letters kept her connected to her family and were the only things that gave her hope,” said Hobson. “She was in seven different camps over five years and had the world’s only collection of letters – 350 – sent to a labor camp.”

Then the show flashes forward to 2005; and Sala, now 80, is preparing for heart-bypass surgery. She’s never told her family about the letters; but now, she gives them to her daughter, Ann Kirschner. Her daughter wants to donate them to a public library because they’re historic documents, but her granddaughters want to keep them in the family, and that leads to conflict.

“The cool thing is that we have copies of all the photos and letters, and my students emailed Ann Kirschner and were able to Skype with her,” said Hobson. “The letters are in a special collection in the New York City Public Library, and Ann invited us to come see them. So during our spring trip to New York, we’ll do that.”

Hobson chose this play because “Our theater department has a pretty large, Jewish population and, sometimes, they’re underrepresented. And as we lose Holocaust survivors, I felt it was important to keep telling their stories. As philosopher George Santayana said, ‘Those who cannot remember the past are condemned to repeat it.’ And our department’s theme, this season, is ‘Strong Women,’ so this show is one way we’re honoring them.”

There’s a cast and crew of 65. And, said Hobson, “I hope the audience will feel they’ve learned about a different part of that history, made a personal connection to it and want to know more.”

PORTRAYING YOUNG SALA is junior Elizabeth Vichness. “Sala is brave, spunky and has a quiet intelligence, but is also very naïve,” said Vichness. “She hasn’t ever left her town and doesn’t know what’s out there. She’s also outgoing and makes friends with lots of people.”

Vichness likes her role because “Sala has a hidden strength and hidden sense of humor that can be overlooked. And she’s optimistic, despite her circumstances, because of the letters and her family. She’s a real person, so I want to do her story justice. It took guts to keep the letters but, honestly, I think that’s what kept her alive. They gave her the will to live.”

She said the story will appeal to the audience because “It’s new information about the Holocaust. People hear about the numbers [of people who died], but this is about how it affected a particular individual. It’s also cool because you get to see Sala’s entire life and what happens to her, years later.”

Student Director Sarah Hasson is also critical to this show’s success. Besides her other duties, she worked with Abby Shichman – the dramaturge who connects the playwright’s words to their cultural and historic aspects to ensure the show accurately represents them.

For example, explained Hasson, “The tallises – prayer shawls – that are worn are made correctly and used in a respectful way. And since I can speak Hebrew, I worked with the cast on their word pronunciations. I also made sure all the little things that make up the show are special and that the actors are portraying them accurately.”

In addition, she had some local educators give the cast an intensive course on the Holocaust and Poland during that time. “We also had other people speak about it from different perspectives,” said Hasson. “We wanted the actors to understand what they were doing and why. It’s important to tell stories – no matter how difficult they are to hear – because, otherwise, we’re doomed to relive them. And this one is written beautifully.”

Junior Sara Willcox plays Ala, a noted figure in Jewish history because she was later part of an uprising at Auschwitz. She and other female prisoners collected gunpowder in their skirt hems and under their fingernails to make a bomb and blow up this concentration camp.

IN THIS STORY, she’s a leader and mother figure to Sala in their camp. “She’s level-headed, and her ability to remain calm helps Sala survive,” said Willcox. “She’s kindhearted and comforts Sala and her mother at the train station when Sala’s leaving home. She tells her mother she’ll watch over Sala and keep her safe.”

“I’m elated that I get to play this role,” continued Willcox. “In addition to being a symbol of hope during the Holocaust, Ala represents what’s good in people in times of crisis.”

She said she learned about “the calm before the storm of the Holocaust,” thanks to this show. “It’s the story of someone who survived and of the trauma they have to carry, their entire lives,” said Willcox. “And audiences will also get that experience.”

Portraying Sala’s daughter, Ann, is junior Rebecca Heimbrock. “Ann’s very determined to do something about the letters,” said Heimbrock. “She’s driven and wants the letters preserved. She’s work-oriented and cares a lot about her family, but it comes out in different ways. She tries to get her preteen children to do things her way, they won’t.”

Heimbrock enjoys her role because “Ann has an interesting dilemma and is almost a villain. But she wants to give the letters away because she cares; she thinks she’s doing the right thing.”

Calling the play “eye-opening,” Heimbrock said, “Books can only teach you so much. But when you’re watching these people onstage going through this horrible tragedy, you feel what they’re feeling and better understand what it was like for the people who went through it.”