Music ‘Fur’ All Ages to Enjoy in McLean
Votes

Music ‘Fur’ All Ages to Enjoy in McLean 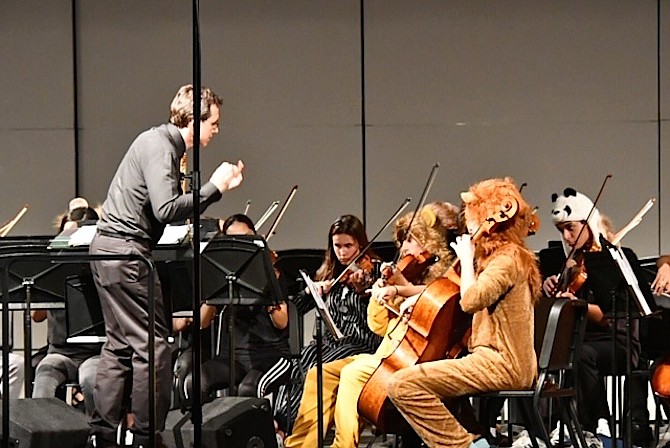 The Langley High School Orchestra performed its first concert of the school year on Tuesday, Oct. 22. The “Fur, Fins, and Feathers” themed concert was a beautiful montage of pieces impersonating a multitude of wild animals ranging from aquarium fish to mighty elephants. Directed by Dr. Scott McCormick and Mr. Adam Willett, the Langley Orchestra left the audience in awe with music inspired by the charming diversity of the animals being portrayed and the creative costumes that were worn by the students, representing the many animals that were exhibited.

“This concert tonight showcased so many different animals and it was great to see all the different orchestras perform the interpretations of the animals,” said senior violinist Melis Akinci.

THE CONCERT opened with the Philharmonic Orchestra playing the iconic “The Eye of the Tiger” by Survivor and arranged by Langley alumnus Craig Hunter. This was followed by Ralph Vaughn Williams’ “The Lark Ascending” featuring soloist Alyssa Kim on the violin. Camille Saint-Saëns’ well known “Carnival of the Animals” was played featuring Cao Linh Pham and Karina Wugang on piano, Fay Shuai on cello, and Cherri Chen on xylophone. “The lion is the king of beasts and husband of the lioness. Gazelles and things which he feasts address him as ‘your highness.’ There are those that admire his roar, in African Jungles and velds, but I think that wherever the lion is, I’d rather be somewhere else” said director Dr. McCormick’s wife, Rebekah McCormick, while narrating the many movements in the “Carnival of the Animals.”

The Symphonic Orchestra gave the audience chills as they performed “Of Glorious Plumage” by Richard Meyer as they created the rich harmonies, depicting birds at both rest and flight. This was followed by a captivating video projection of clips from the 2002 animated movie, “Spirit, Stallion of the Cimarron,” as the orchestra played music from the adventurous film.

Finally, the Concert Orchestra closed the concert off with Doug Spata’s whimsical “The Falconer.” Referring to themselves as “Doc-lings,” Dr. McCormick’s two young children introduced “The Speckled Hen Overture” as a piece that starts with an adagio commencement to a pastoral tune, to a country waltz, and ends with a hoedown. The last piece of the night featured the well-known composer Hans Zimmer as the orchestra played music from the award-winning Walt Disney Pictures film, “The Lion King.” A video projection played behind the orchestra, presenting a compilation of clips from the acclaimed film.

THE LANGLEY ORCHESTRA students were excited to dress the part as they played a variation of pieces representing many different species. The stage was full of vibrant colors as many animals made their way on stage to perform.

“I thought the real victory of the night was cellist Riker Wilson’s valiant effort to get much of the orchestra to dress as gorillas,” said junior violist Otto Janke. “I thought it made a big impact and set the concert on the right foot.”

Although the Langley Orchestra is an entirely string orchestra, many of the arts departments contributed to the success of this concert. The concert was performed with brass, wind, and percussion instruments and the artwork presented in the concert was by Langley Senior Josh Guinn who has received the Silver Key Award, an Honorable Mention in the Scholastic Art and Writing Competition, and has exhibited artwork at the VCU Summer Intensive Art Gallery and the Tyler School of Art Gallery.

The contribution and effort put in by the students, directors, and assisting parents made it possible to create a zoo inside of the Langley Auditorium and brought the orchestra’s year off to an incredible start.