Riveting military courtroom drama based on events at Guantanamo Bay. 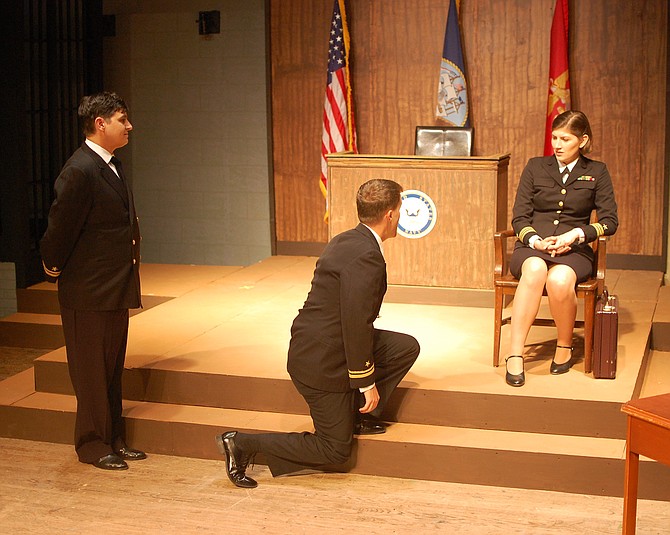 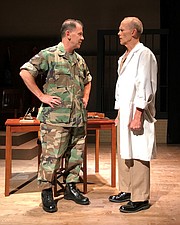 The Little Theatre of Alexandria (LTA) is producing “A Few Good Men,” from now through Sept. 28, 2019. This riveting courtroom drama tells the story of military lawyers at a court-martial who uncover a high-level conspiracy in the course of defending their clients, two U.S. Marines accused of murder. Based on events that took place at Guantanamo Bay Naval Base in 1986, the play investigates both the nature of our military mentality and the Marine Code of Honor. The show is produced by Robert Kraus.

Director Kathleen Barth said she proposed to direct the play because of her family’s military roots – her parents served in the U.S. Army, and her older brother currently serves there. “In fact, my mother’s military background closely resembles Lt. Cmdr. Jo Galloway’s journey in this play. My mother enrolled and served in the Corps of Cadets at Texas A&M in the late ’70s and early ’80s, when women were only recently allowed to join the corps. When she graduated from the corps, she pursued a brief career as an Army logistics officer before transitioning to nursing.”

She continued: “The play’s primary themes of honor, duty, and service hit close to home for me, hence my profound attraction to this play and desire to direct it.”

As far as challenges, she added: “Like many of (writer Aaron) Sorkin’s plays and screenplays, ‘A Few Good Men’ includes a plethora of location changes and flashbacks that ultimately weave the narrative together. While these plot devices are relatively simple to pull off in film, they can be difficult to stage for a live performance. I decided that the most effective way to convey all of the locations and the flashbacks was to stage this play in a kaleidoscopic manner. To pull this off, I decided we needed a simplistic set that would allow us to designate multiple areas of the stage for various locations in D.C. and in Guantanamo. I also pulled lighting into the staging to illuminate the tight areas on stage that we’d use for the various locations and flashbacks.”

Emma Wesslund is playing the role of Lt. Cmdr. Joanne Galloway, who works in internal affairs for the Navy JAG Corps. “While desk work wasn't her first choice (in Act II of the play we learn she joined the JAG Corp because ‘they wouldn't let [her] fly the planes or drive the boats.’), she approaches it with rigor and passion. To Commander Galloway, her assignment at internal affairs is an opportunity to make sure things are run properly, all service members are treated with respect, and nobody falls through the cracks. These values lead to her flagging a case about two enlisted men in Guantanamo Bay who she feels weren't given a fair chance. This is what she's doing when we meet her at the top of the show,” she said.

She added: “Before working on this play, I didn't know much about daily life in the military, especially for a Navy JAG Officer. It's been invaluable to have so many people in the cast and crew who have served, or have relatives that served to provide insight about what it's like and could coach us on protocol. I've also done a ton of research and was able to speak to a woman who served in the Navy JAG Corps.”

Edwin Kindler plays the role of PFC William T. Santiago, a marine based in Guantanamo Bay. “He is miserable, feels mistreated and he wants nothing more than to be transferred out,” he said.

He said his challenge was the fight choreography, which was fun to learn. “It certainly was not a negative challenge, but it was a fantastic new learning experience,” he added.

As far as audience takeaways, he added: “One point many of the cast and crew have kept coming back to throughout the entire rehearsal process is that almost every character believes they were doing the right thing. I hope audiences come away asking themselves questions about culpability, and at what point we as individual humans need to take responsibility for our actions. I (and maybe Santiago) may have biased opinions on the subject of who is ‘guilty,’ but I hope that audiences form their own opinions and leave at the end of the show wanting to talk about them.”

Miguel Rosario is playing the role of 1Lt. Jonathan James Kendrick, who is the embodiment of the Marine. He said he’s “accepted and believes in the Corps values to the nth degree, while also slightly twisting them to the point of zealousness and fanaticism. These values neatly align with his faith and his ‘black and white’ views of morality and soldierly virtue.”

For challenges, he said: “It was challenging to manage rehearsal schedules with current family and active duty military commitments while still arriving at each rehearsal fresh and ready to perform. Maintaining fresh vocal cords while also going ‘full throttle’ in rehearsing the platoon scenes was also challenging.”

As far as audience takeaways, he said: “I hope audiences will take away the idea that morality and integrity exist in the heart of every service member and that the Corps values of our institutions (while imperfect just like their members) have been created and maintained in a manner that still ultimately lead us towards justice and the protection of innocents.”

Jonathan Mulberg is playing the role of Sam Weinberg, one of the three defense lawyers in the play. “He is a family man and best friends with Daniel Kaffey. While not the same caliber of lawyer as Kaffey, Sam Weinberg holds his own and is not afraid to challenge his team and the military establishment to do what is right.”

He added that learning the script was his biggest challenge. “Aaron Sorkin's style of writing is very different than what I am use to as an actor. I also had to make sure that all the legal jargon sounded natural and confident, and that was a major challenge,” he said.

LTA is producing “A Few Good Men,” from now through Sept. 28, 2019. Showtimes are Wednesdays through Saturdays at 8 p.m.; Sundays at 3 p.m. Tickets are $21 to $24. The venue is located at 600 Wolfe Street, Alexandria, VA. Visit the website at www.thelittletheatre.com.