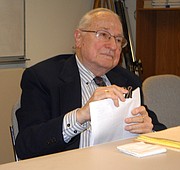 Supervisor Warren I. Cikins served in the 1970s as Mount Vernon Supervisor.

As our county, state, and country are going through times that cause us to reflect on our history — both good and bad — I am very glad that our county has chosen to recognize our long-timed esteemed former Supervisor Gerald “Gerry” Hyland with a naming ceremony at the South County Center on 8350 Richmond Highway that will take place on Friday, Sept. 20 from 1 to 4 p.m.

That building, which he worked very hard to bring to fruition, is an important part of our human services outreach effort to the citizens of Mount Vernon and Lee. No better name could go on that building as that of Gerry Hyland’s who dedicated most of his adult life to public service and working to better the lives of those less fortunate. Moreover, he was totally devoted to our Mount Vernon community and it is an honor well deserved.

Equally important to the much-deserved recognition for former Supervisor Hyland is the need for similar recognition for someone many readers may not know, and that is the late Supervisor Warren I. Cikins. Cikins served in the 1970s as our Mount Vernon Supervisor, and more than anything is the reason we have the fabulous Mount Vernon RECenter at the corner of Belle View Blvd. and Fort Hunt Rd. He has had an amazingly positive impact on the quality of life in our community, which continues to this day. When I was growing up in Mt. Vernon in 1974, Mr. Cikins was elected to the Fairfax County Board of Supervisors at a time when our community was evolving in many ways. Warren brought to the Board of Supervisors and our Commonwealth a strongly held belief in building meaningful relationships: between the left and right, business and government, communities of faith, communities of color, and most importantly between himself and all of his constituents in Mount Vernon. Like Supervisor Hyland years later, Supervisor Cikins’ door was always open to the public. If you needed him, he was there for you. A quintessential public servant indeed!

Warren served in the White House from 1962 to 1966 during the Kennedy and Johnson administrations. He was a Congressional staffer, an educator, management consultant and strong advocate for criminal justice reform.

When Warren became Mount Vernon Supervisor, he and his constituents realized the community was lacking in many ways, so he initiated a number of community task forces to change things. One of them was the Task Force on Youth. Among many other recommendations, the group wanted was a swimming pool. But the Board had built the Lee District RECenter which was initially proposed to serve the Mount Vernon area. Can you imagine that the Board of Supervisors thought that the Lee RECenter pool would be enough to serve the Mount Vernon area too? However, the group thought a skating rink would initially be better for passage by the Board because none existed in Fairfax, and it would be easier to add the pool later, which is exactly what happened.

There is a plaque outside the entrance to the skating rink that reads: In 1978, the Fairfax County Park Authority opened the region's first public indoor ice skating rink significantly enhancing opportunities for healthful activities, competition and leisure time pursuits available to Fairfax County residents. The Mount Vernon Ice Skating Rink would not have become a reality without the tireless support and effort of: Warren I. Cikins, Mt. Vernon District Supervisor, 1975-79.

I was able to experience this first-hand as my mother, Addy Krizek, was chosen by Warren

to be part of his staff. As Warren’s colleagues from his generation have pulled back from public life, it is important to honor Warren’s service to Mount Vernon by renaming the Mount Vernon RECenter for him while his peers, and his wife and family, can share in the celebration of our community history. Warren’s focus on the Mount Vernon community provided the vision for our wonderful facility that has served our families and others for 40 years. Indeed, like many of us, I both learned to ice skate and years later, teach my daughter to skate there.

Back then, many Board members worried that it would not be economically viable.

Warren, working closely with Glenn Fatzinger, his Mount Vernon appointee to the Fairfax County Park Authority, believed in the plan. It wasn’t until Warren's parents passed away two weeks apart in July of 1976, that the Board voted to approve the project that we all know now has been a tremendously successful community recreational destination and will soon be expanding and most likely adding a second ice rink due to its popularity.

Given Warren’s legacy of fighting for resources for our community, the time has come to ask for the Board of Supervisors to vote on renaming the Mount Vernon Recreation Center to honor a champion of finding that middle ground, fighting for this end of the county, and a long-time leader in Mount Vernon, Warren Cikins. More importantly, I know that the history of the community would be served well by such a pronouncement.