‘There Are Too Many Unanswered Questions’ in Centreville
Votes

‘There Are Too Many Unanswered Questions’ in Centreville 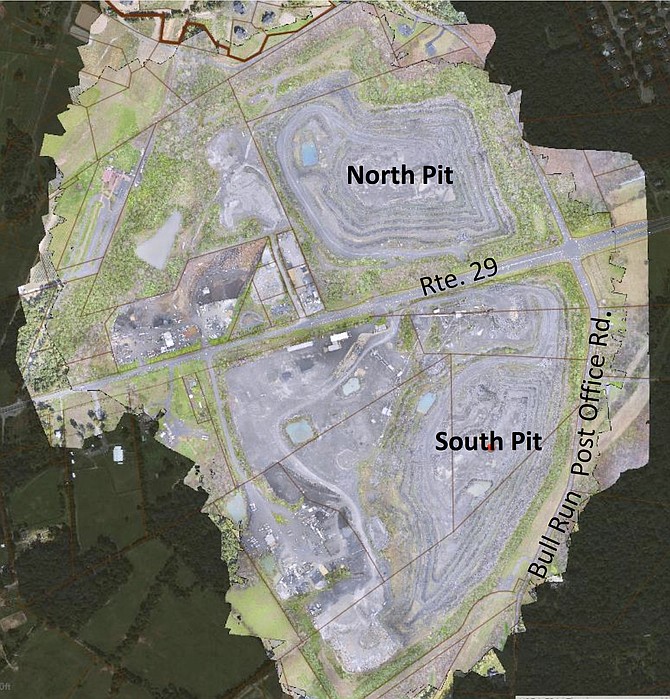 Map of Luck Stone’s mining operations along Route 29 in Centreville. 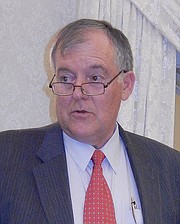 Since 1938, Luck Stone Corp. has operated its quarry along Route 29 in Centreville. The north pit is north of the road, and the south pit is south of Route 29, near Bull Run Post Office Road.

The mining site receives annual inspections and detailed monitoring reports and must renew its special permit every five years. Now, though, it’s seeking to not just renew that permit, but amend it to implement a reclamation plan as it winds down work in the north pit.

“There are approximately 15 years’ worth of mineral reserves left in the north pit,” said attorney Andrew Painter, representing Luck Stone. “But Luck Stone can’t simply walk away and turn off the lights.”

It’s required by law to take certain measures, so the quarry doesn’t become a safety hazard after mining operations there cease. So it’s proposing to create a manmade, 20-acre, surface lake, about 50 feet deep, to replace the north pit.

And he said that, if Luck Stone didn’t do anything with the pit, it would turn into a lake that would be way too deep. This way, said Painter, “It could be used for future recreational use.”

So instead of continuing to operate in the north pit, Luck Stone will forego digging up the remaining, mineable reserves it contains and begin restoration efforts upon Fairfax County’s approval of the special-permit renewal and amendment. It also hopes to eventually sell that land.

“I’m sure a variety of entities will be interested in buying the property,” said Luck Stone’s Anthony Venafro. “We’re currently in the final phase of the mining process.”

But resident Dawn Battle was concerned. “Since the lake would be higher than the neighboring subdivision, if there was a substantial weather event, would there be a chance of the lake flooding?” she asked.

“That issue would be considered and up for county review before the lake is designed,” replied Mike Maloy with ECS, part of the special-permit project team. “And it would be done according to DEQ [Virginia Department of Environmental Quality], state, federal and local requirements for stormwater management.”

“The flooding will all be controlled with the engineering design,” explained Venafro. “If we just abandoned the pit, it would fill up to 125 feet. But the pond we’ll build will be on the surface, with gentle slopes.”

“My sympathy goes out to Luck Stone because of the actions of the Fairfax County Water Authority,”

ANOTHER RESIDENT asked if construction trucks would go down Bull Run Post Office Road on their way to the quarry. Venafro answered, “We’ll do whatever we can to restrict trucks from using it as a through road.” Sully District Council’s Jay Johnston further requested that nearby Pleasant Valley Road – the main road cutting through the populous, Virginia Run community – also be restricted from the trucks’ use. And Venafro was agreeable to the idea.

“Restoration work will take about 20 years in the north pit, while we mine the south pit for another 15 years or so,” said Venafro. “So we’re looking at another 40 years of mining and reclamation work there.”

Resident Dan Evans asked why Luck Stone decided not to finish mining the rest of the north pit. “Because we didn’t initially expect residential development to be so nearby,” replied Venafro. “So we made a business decision to stop.”

But Johnston didn’t like the idea of Luck Stone turning the north pit into a lake, instead of a county reservoir, as had been previously considered. “We don’t know where the fill materials [for that lake] are coming from,” he said. And according to Luck Stone, he added, “Only one of every 300 truckloads would be tested for [possible] contaminants.”

“There are too many unanswered questions,” continued Johnston. “They should instead turn it into a recreational area. And there are environmental concerns that aren’t being addressed, so I’d ask the Sully District Council to recommend denial of the special permit.”

Andrew Colucci, another attorney representing Luck Stone, said, “We inquired, but no one was interested in getting their water from a reservoir there. And it couldn’t be a recreational area unless we made the lake there this way, smoothing out the edges.” Venafro further noted that the lake would undergo multiple reviews by various entities.

Virginia Run resident Bob Anderson, a geologist, was also concerned about the “quality of the reclamation fill. Would trucks access the pit only from Route 29? And how do you ensure the purity of the fill from pickup to delivery?”

“A digital application will track each truck from its source to our site,” explained Venafro. “And our main entrances have dedicated turn lanes from Route 29.”

WFCCA Land-Use Chairman John Litzenberger asked, “If some bad dirt slipped through and got into the aquifer, would Luck Stone take financial responsibility for the damage to the [nearby] homes’ water supply?” Venafro said it would.

Regarding the trucks, Venafro said about 300 trucks would be involved, but “They’d be just 1.8 percent of the normal traffic on Route 29. And it’ll still be less traffic than we had during the heyday of our operations in the early 2000s.”

However, citing worries about water contamination, the environment and hundreds of extra trucks on the road, both land-use groups voted for denial of the permit amendment.

THE COUNTY’S BOARD of Zoning Appeals (BZA) held a public hearing on this matter, July 22. But the day before, Litzenberger emailed it to express concern about “the large number of dump trucks that would use Route 29 through residential neighborhoods to fill up the old, gravel pit with clean dirt.” Also angry about the lake, he said county residents need more input on the final plan.

“My sympathy goes out to Luck Stone because of the actions of the Fairfax County Water Authority,” he wrote. “They pulled the rug out from under Centreville residents and shortchanged Luck Stone by pulling out of an agreement whereby the Water Authority would use [that] gravel pit for a freshwater reservoir. [Their] actions are totally unacceptable, and we need time to lobby to get the county appointees replaced on [the Water Authority]. Please defer this case so we can get it right.”

The BZA did defer its decision to Oct. 7. But after a two-year review by the county and an independent firm it hired to review the proposal, county staff is currently recommending approval.