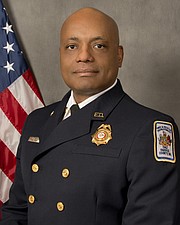 Fairfax County Fire and Rescue Department (FCFRD) Fire Chief John Butler has been selected as a recipient of the 2020 International Association of Fire Chiefs (IAFC) President’s Awards of Recognition.

This award is presented by the IAFC president to honor individuals from the fire service who have contributed in a significant way during the president’s term. Chief Butler is being recognized for his commitment to the IAFC, especially focusing on his role as a leader in the fire service promoting diversity and inclusion. Chief Butler is a founding member of the IAFC Diversity Executive Leadership Program (iDELP), which supports individuals from under-represented identity groups and those interested in creating a diverse workforce to advance into the ranks of leadership in the IAFC and fire and emergency service leadership at a national level. More recently, Chief Butler has assisted past IAFC President Gary Ludwig develop the IAFC Fire Chief’s Equity and Inclusion Council, similar to a program Chief Butler started in the FCFRD. Additionally, Chief Butler was instrumental in serving as an IAFC representative to have open discussions at the national level on race relations.

Chief Ludwig stated “Chief Butler is always gracious to help out, no matter what the topic. He is a leader in the fire service and has helped navigate the open dialogue we have had at the IAFC regarding race relations and our efforts to continually move the fire service forward.”