Having ‘Less Cars on the Road Helps Everybody’
Votes

Having ‘Less Cars on the Road Helps Everybody’

Fairfax City woman bikes to and from work 1,000 times. 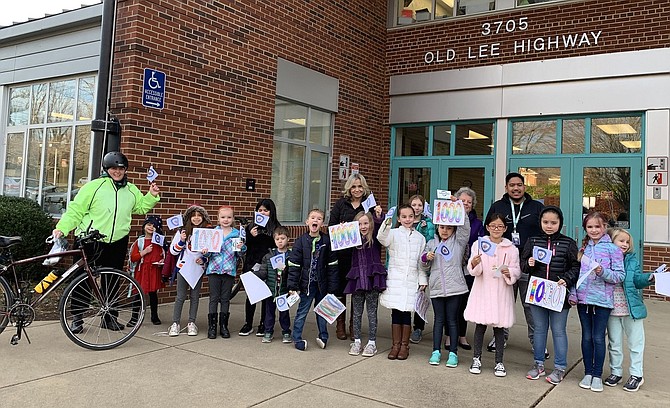 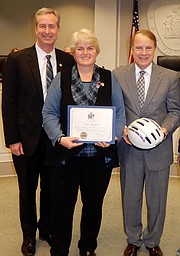 Posing for a photo during the 1,000th ride are (from left) Richard Michelback, Evie Ifantides, David Bulova and Fran Migdal.

As a young girl in Athens, Greece, Evie Ifantides loved riding her yellow bike. But at age 12, she and her family moved to Maine, life happened, and she stopped bike-riding on a consistent basis until she was in her 40s.

Living in Fairfax City since 1993, she’s now an FCPS pre-K-12th grade ESOL technology specialist, working in Instructional Services with teachers and staff. And on Dec. 6, she completed her 1,000th bike ride to and from her job, logging an impressive 9,585 miles while also raising money for safe bike routes for students.

“In March 2012, I was in an FCPS leadership-development cohort, and we all had to come up with an idea to transform something in the school system,” explained Ifantides. “And one of my fellow cohort members, Richard Michelback, had an idea.”

He figured that employees living further from FCPS than 5 miles could drive their cars somewhere, park them and then bike the rest of the way to their jobs. And if they lived 5 miles or less, they could just bike from home.

“About two weeks later, we had a Parks and Rec Advisory Board meeting, and people showed us how to bike from GMU to Vienna,” said Ifantides. “At the end, I asked one of the presenters, Frank Linton, how to go from my house to my work. We were then working in Fair Oaks, about 4 miles from my home, and he showed me two different ways to get to work.”

Her first day, it was raining, so she couldn’t do it because she needed lights for her bike. Ever since then – except for in really bad weather – she’s biked to and from work. Her office is now in the Willow Oaks Center near Inova Fairfax Hospital in Falls Church, so her ride has grown longer – 6.3 miles each way – but that hasn’t stopped her, a bit.

“Sometimes I park at Thaiss Park for a 3½ to 4-mile bike ride, depending on what else I’m doing that day,” she said. “But I try to do the whole, round trip, most of the time – 45 minutes each way. And I don’t have to worry about traffic – it’s a consistent 45 minutes.”

HER ROUTE is half bike trail and half road. The toughest part, said Ifantides, is on Old Lee Highway from Fairfax High to Home Depot because it’s downhill on a two-lane road. She then takes the Wilcoxon Trail, continuing onto the Fairfax County Gerry Connolly Cross Country Trail, crossing Prosperity Avenue, taking a few more streets and eventually reaching her destination.

“It’s a little dangerous going downhill near the hospital because of people cutting through to go to the hospital,” she said. “A lot of trees have come down in my path and, depending on how big the tree is, I’ve either worked with people to move it out of the way, or they’ve helped me over or around it.”

Ifantides never had a goal of doing 1,000 rides and, since attaining it, she’s continued to rack up even more of them. “The good thing is that I’m exercising for 90 minutes/day without thinking about it,” she said. “And I’ve met incredibly nice and kind people along the way, walking their dogs, birdwatching or just enjoying being outside.”

She also likes hearing and seeing nature – frogs at a pond, plus birds and other wildlife. “I enjoy seeing the different seasons,” said Ifantides. “And the trails are beautiful, with bridges going over waterways and creeks. I’d miss that in a car – I’d just see concrete. New research says that being out in nature, 100 minutes a week, is good for you. And I have more time to think about things and more energy to start my workday.”

Her bike riding has also raised money for a good cause. In November-December, she helped raise $1,400, via the FCPS Foundation, for Safe Routes to School. It teaches children how to ride bicycles safely, and the program even held a bike rodeo at one of the elementary schools. And the money raised purchases lights, helmets and other bike accessories for children needing them.

The day Ifantides took her 1,000th ride also marked 9,585 miles total since she began bicycling in March 2012. For the special occasion, Del. David Bulova (D-37) and Fairfax City Mayor David Meyer joined her on the ride, as did Michelback and FCPS technology specialist Fran Migdal.

On the way to her office, they stopped at Daniels Run Elementary before school and received a warm and enthusiastic welcome. “It was fun to see the kids in the SACC program come out with signs to greet me,” said Ifantides. “And we talked to them about the importance of being outside and of exercising.”

Then when the five of them arrived at her office, about 50 people were waiting outside to greet them with banners, posters and cheers to acknowledge Ifantides’s milestone. “It was really great to see my colleagues out there – who’ve also celebrated many of my other rides,” she said. “And my supervisors – all the way to the superintendent’s office – have also been supportive, from the start.”

She was also honored Dec. 10, at the start of a City Council meeting, when Bulova and Meyer presented her with a certificate of appreciation. After explaining why she was being recognized, Meyer said, “She’s making a difference in the lives of thousands of persons in our community.”

PLEASED, Ifantides said, “That was unexpected, and I appreciate that the Council took the time to write up and present that certificate in a public way.” She also encourages others to try bicycling. And if they need help finding routes or getting started, she advises them to contact FABB (Fairfax Advocates for Better Bicycling), WABA (Washington Area Bicycling Assn.) and its Women and Bicycles group.

The bottom line, she said, is that “The more we walk, run and/or bike to our destinations, the less cars are on the road – and that helps everybody.”