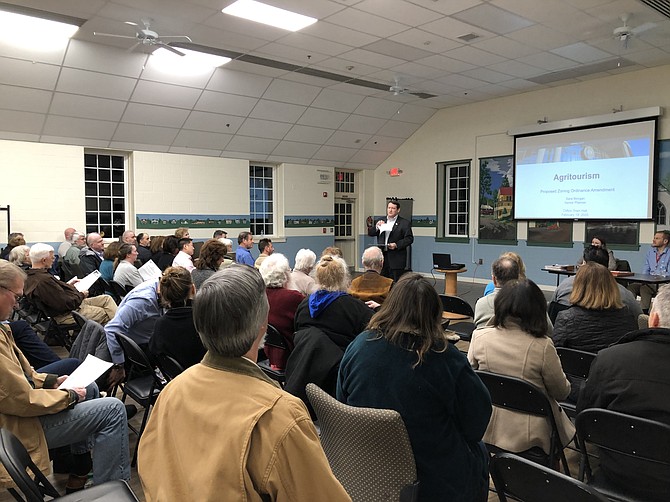 Supervisor Pat Herrity addresses the crowd at his Springfield District Town Hall Meeting on Feb. 19, 2020. He discussed his thoughts and concerns about the County’s proposals. Photo by Caleb Lester/The Connection

Supervisor Pat Herrity stays after the meeting to further discuss Agritourism and the ADU proposals with concerned constituents.

On Feb. 19, Supervisor Pat Herrity (R-Springfield) and Fairfax County Staff held a community meeting regarding the County's proposed Agritourism Zoning Ordinance Amendment, changes to the requirements for Accessory Dwelling Units (ADUs) and the addition of a "Rural Resort" use, now named "Country Inn."

The County’s current proposal on a Country Inn use is described as a special exception use in certain zoning districts on 20 acres or more throughout the County. This proposal would allow rural property owners to use their land as venues for weddings, breweries, or fair and festival grounds.

THE MEETING was held at the Clifton Town Hall, and saw a packed house of concerned community members and residents seeking to learn more about the County proposals and to provide their feedback.

County staff provided a brief presentation and used most of their time taking questions and feedback from attendees. Most everyone's attention was focused on Agritourism and “Country Inns," with many voicing their opposition.

Residents discussed several significant areas of concern. Many feared the proposed amendment, and Country Inns, would lead to an increase in development in their neighborhoods. They also voiced concerns about a possible influx of people, traffic, safety, noise, and the potential negative impacts on the environment, particularly the Occoquan Watershed Residential-Conservation (R-C) District.

Supervisor Herrity also addressed his concerns over the need for more details and questioned the proposed acreage requirements for Country Inns and the use of these potential properties. He also echoed the environmental worries that residents discussed.

Currently, the Code of Virginia permits agritourism by-right when associated with an agricultural operation. Localities may regulate agritourism activities when there is a significant impact on the health, safety, or general welfare of the public. County staff has proposed definitions for agritourism and use limitations to provide thresholds for a predictable and consistent path for future agritourism activities.

Throughout the discussion, County staff cited both Loudoun and Prince William County, along with a similar proposal and venture in the Sully District. These references sparked some attendees to inquire about more urbanized areas in the region, like Arlington County and Alexandria City. According to County staff, those jurisdictions are not exploring any similar proposals.

County staff also proposed revisions to ADU standards during their presentation. Currently, all ADUs require a special permit review by the Board of Zoning Appeals. Staff is offering a more streamlined process that would allow administrative approval of an ADU when located within the principal dwelling. Staff is also proposing to limit the size to 1200 square feet. Currently, an ADU is only allowed if someone on the property meets certain age or disability restrictions. However, the Board and staff are looking to eliminate those constraints as well.

COMMUNITY MEMBERS voiced concerns over increased density in their neighborhoods, and the lack of enforcement in a complaint-based system. At the same time, Supervisor Herrity expressed his support of easing the requirements for ADUs with the current age and disability restrictions while still opposing eliminating these restrictions in their entirety.

Wednesday night’s meeting shed light on the rapidly changing landscape of Fairfax County. Over the years, the County has presented itself as a hub for new businesses and new development. It is now situated as an ever-urbanizing powerhouse, inviting everyone from all over the world to live, work, and raise and family. At a time when rural preservation and urbanization collide, residential communities and the protection of their neighborhoods are taking center-stage.