Technology around the Newington neighborhood is valuable in this case. 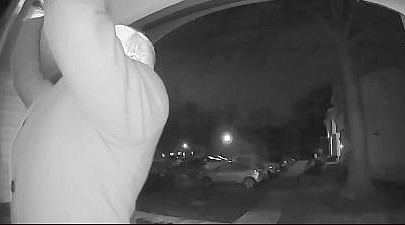 He’s approaching the door with the camera in hand.

Stalking and taking unauthorized photos at a house in Newington Forest started as an acquaintance at the workplace, and thanks to the technology of the doorbell cameras, the man who continued stalking several locations around Newington Forest was arrested.

The suspect, Christopher Kiernan Murphy, was arrested in Arlington and charged with three charges of peeping and one charge of stalking. He was booked and released on his own recognizance. The arrest came in Arlington because that was where Murphy worked.

Natalie Fleming, the Newington resident who was the victim in this case, had a feeling something was going on and decided to check her doorbell camera. After seeing the footage of the suspect getting out of his car, approaching the door, and taking pictures through the transom windows, she warned her neighbors, and a few neighbors reported seeing him. She’s still looking for help from the surrounding community. “I want people to look at their ring footage and see if they see him,” said Fleming.

The Newington Forest homeowners association had gotten calls about the individual, “but they never called police nor warned residents,” said Fleming on the Nextdoor Neighbor chat site. This incident has “jeopardized my feeling of safety and security in my own home,” she said.

The doorbell cameras are quickly becoming a tool for law enforcement. “Any type of video footage can be useful evidence,” said Lt. Erica Webb of the Fairfax County Police Department. Webb would not comment on Fleming’s case because it is still under investigation, and will go before a judge on April 1.

Another Set of Eyes

A “Ring” doorbell camera is about $100 and can be found in hardware stores and online. It was invented by Jamie Siminoff, it said on the Ring website, and he started tinkering around when he came up with the idea and shared it with his wife. “If not for my wife, the Ring™ Video Doorbell would not exist,” he said on their website. “One night I shared my idea for reinventing the doorbell. She loved it! Not just for the obvious convenience, but for the security of now being able to safely answer the door from anywhere.” It was compared to caller ID for the front door. “Our Mission: To Reduce Crime in Neighborhoods,” Ring claims.

“Ring” is not the only brand out there. Other brands include Vivent, ADT, Amcrest, and Remo who also make doorbell cameras. There is an app for camera-doorbell so it’s possible for property owners to know who is knocking at their door even when they are away.