Toll Lane Construction on I-66 Calls for Engineering and Patience

Interchange reconstructions are a big piece of the puzzle.

The Route 28 interchange is complicated, and commuters will experience the construction for a couple of years until it is completed.

Toll lanes cannot be added to the interstate highways without reconstructing the interchanges involved, and with “Transform 66” underway, 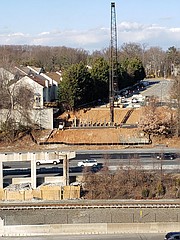 Vaden Street bridge is being replaced over I-66.

drivers know this all too well when they pass through Routes 50, 123, 28 and Lee Highway interchanges on I-66. The quagmire of cranes, beams and trucks are there for a reason, and so are the delays that add to travel times.

The plan on I-66 outside the beltway is to add another lane on each side and turn them into toll lanes so single drivers have a choice to pay the toll for a faster trip or stay in the general purpose lanes, and carpoolers can ride for free. That choice for a single driver might be a $35 toll, as drivers have experienced on the other express lanes during rush hours. But access to the tolling portion of the project requires rebuilding these interchanges to accommodate the additional lane, and this involves lane closures and detours.

Nutley and Vaden Street in Vienna

The work to rebuild the interchange at Nutley Street shifted into high gear last summer, with a few high-tech solutions implemented including a double roundabout interchange, similar to the “diverging diamond,” that has caused panics elsewhere in the state. This involves two roundabouts on either side of I-66.

The bridge at Vaden Street was demolished, and a new bridge will open in September 2020, officials say, but in the meantime, all traffic is being routed to the Nutley Street bridge to cross over I-66. By closing the road at Vaden Street, it “reduces construction timeline of bridge to 12 months vs. 24 months if bridge remained partially open during construction,” VDOT says. Since there are residences close to the bridge demolition site, VDOT is trying to minimize disruption during construction by taking precautions with lighting, dust control, and noise.

According to Lynne Coan with the Town of Vienna, the outreach they have conducted about the construction has been good but the noise was a

“We do feel that VDOT is doing a good job of keeping the Town in the loop with info about what’s going on, especially if the impact is close to Vienna.”

factor. “We do feel that VDOT is doing a good job of keeping the Town in the loop with info about what’s going on, especially if the impact is close to Vienna,” she said. The bridge destruction at Vaden Street did generate some complaints early on, as did the increased traffic on Nutley Street, “but as of yet we’re not seeing a significant impact,” on the traffic jams, she said.

The Route 28 interchange along I-66 in western Fairfax County is a big part of the project. Drivers on Route 28 heading north, and trying to get to I-66 east have a more complicated drive now that VDOT closed the ramp and are using a turn at the existing traffic signal.

The area around E.C. Lawrence Park is being redesigned too. The old park entrance from Route 28 permanently closed in December and there’s a new park access road. Near the park though, there is the Braddock Road connection to consider, and an overpass is planned to link Braddock to Walney. Detours for this construction involve a U-turn which could disrupt traffic. When construction is complete in 2022, the new configuration will be a multi-level interchange with 11 new bridges providing separate access to and from the I-66 express and general-purpose lanes.

The Route 28 interchange is complicated, and commuters will experience the construction for a couple of years until it is completed.

VDOT acknowledged that this interchange is complicated. The configuration is going from a single level interchange to a two-and-a-half level interchange with connections to both the I-66 general purpose and express lanes, and removing the four traffic signals along Route 28 between the park and Route 29.

"All of these improvements are designed to improve traffic flow along Route 28 and I-66, and provide easy access between Route 28 and I-66 for all travelers," said VDOT project spokesperson Michelle Holland.

It’s much of the same at the Chain Bridge Road (Route 123) interchange, except the adjustments for the bike trails that are part of the picture. Throughout the public hearing process, the biking community spoke up, and the engineers made efforts to ensure the bicyclists that their needs were being addressed. The George Snyder Trail is one part they are working to link to another trail along the northern edge of I-66 between the Vienna Metro Station and Route 123.

The I-66 overpass bridge at Route 29, was demolished in December, incorporating overnight detours, and putting the wheels in motion for that interchange to be rebuilt. The left turn from Route 29 to I-66 east will be closed until later this spring. The new bridge over Route 29 will be wider for additional lanes to be added to Route 29 in the future, and there will be additional clearance to the Route 29 underpass for commercial vehicles.

There was a recent project update meeting at Stone Middle School in Centreville that was attended by about 130 people, Holland said. At the public meeting, VDOT discussed the work happening at the Route 28 and Route 29 interchanges, as well as along Route 28 between I-66 and Westfields Boulevard.