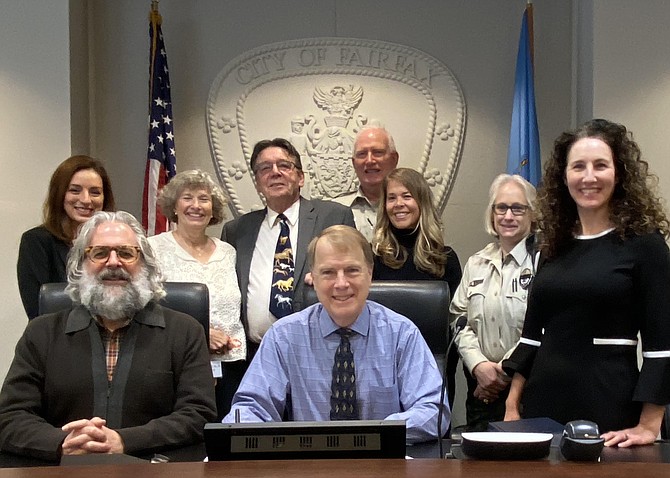 The City of Fairfax enacted a new ordinance on Monday, Jan. 6, which requires pet shops to obtain a permit before opening an operation to sell companion animals in the city. In a signing ceremony, with animal control officers and animal advocates participating, Mayor David Meyer signed the ordinance into law in the city council chambers, effective the same day, on Jan. 6.

The ordinance, championed by animal welfare groups, had unanimous acceptance by the city council. Their action makes Fairfax the first northern Virginia locality to join over 300 other municipalities across the nation in tightening pet store regulations. Actions taken in response to ongoing health and consumer protection issues with pet stores selling dogs, cats, and rabbits.

Fairfax was the focus of national attention in 2019 when an undercover investigation by an animal protection group discovered dead rabbits and a puppy in the freezer of the Petland-Fairfax pet store. Petland employees in the store reported that rabbits which became sick were permitted to die instead of receiving veterinary care. The store lost its national franchise and was closed shortly after the undercover story surfaced. Following a six-month-long investigation by Fairfax animal control police, the two managers were charged with multiple counts of cruelty. Their case will be heard in Fairfax District Court on Jan. 14.

The Petland-Fairfax store had been problematic since 2013, with consumers alleging receipt of sick puppies and fraudulent business practices. One puppy purchased there lent its name to a State law in 2014 mandating consumer protections for pet store customers: Bailey’s Law. State law gives little authority to localities to regulate pet stores. However, State law does allow localities to establish a permit requirement for pet shops and dealers.

Before signing the ordinance, Mayor Meyer commented, “animals don’t have a voice, and their beauty and their gift to creation and to us, is sometimes elusive to those only seeing a dollar sign. So this legislation, …and everyone who’s standing here …says they have a value far beyond a monetary calculation.”