Opinion: Commentary: Siege of the Capital 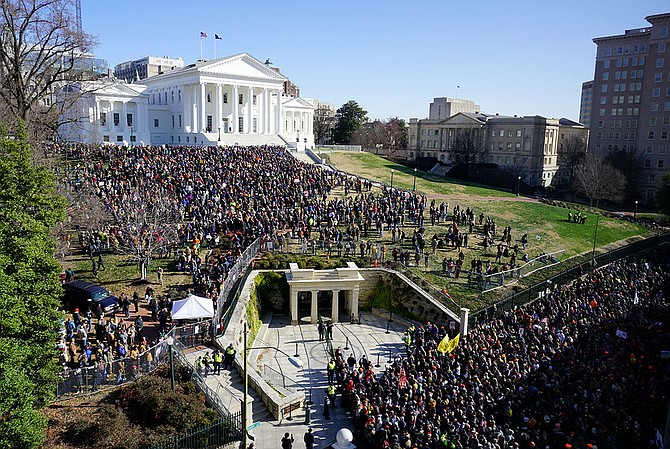 This column is being written as news stories continue to increase that thousands of persons opposed to gun legislation will be coming to the Capitol grounds to protest. Increased citizen participation is usually a good thing, but in this case it is seeming more like a siege than a peaceful protest. Already the FBI has arrested three individuals in right-wing hate groups who apparently were planning to come with guns that would be fired from various locations to start a race riot. Three other persons were arrested from the same hate group but whose plans for the day were less specific. Law enforcement authorities had gathered enough credible evidence of a threat that the Governor barred any guns on Capitol grounds on Monday except for the police. Security fencing was installed on the grounds. Streets were closed.

The General Assembly had made plans to conduct business as usual as much as that is possible. I am hopeful that the news you have been reading is that the day passed without serious incident. I can assure you that I will be going forward with my bill to close the many loopholes in the current background checks system to ensure that people who have shown themselves to be a threat to themselves or others will not be able to purchase firearms. Recent polls indicate that about 80 percent of people support the bill as a good public safety measure.

Only twice before am I aware that the capital experienced a serious physical siege. The first occurred in 1676-1677 while Virginia was still a royal colony with its capital in Jamestown. Nathaniel Bacon led an armed rebellion against royal Governor William Berkeley who he contended did not provide adequate protection against Indian attacks for settlers on the western frontier. The story gets more complicated as there was a desire by the settlers to seize more land from the Indians and for Bacon to gain more power in the governance of the colony. His attack led to the capital being burned. You can still view the foundation of the capital if you visit Jamestown Island today.

The second siege of the capital came near the end of the Civil War after Virginia had been out of the Union for four years. Richmond was the capital of the Confederate States, and many skirmishes and battles occurred around it during the war. The city was key to mobilizing, outfitting and feeding the Confederate army but did not fall to Union forces until April 1865. Confederate forces burned the city as they departed. Fortunately, the Capitol building was saved from the fire that otherwise destroyed the city. A week later the Confederates surrendered at Appomattox west of the city. The war was ended even though there are many who continue to debate who was to blame for the war and who won.

A well-regulated militia made up of state and local police will protect the Capitol building and its occupant legislators from those who would deny freedom to others through their misuse of firearms. We will not be bullied regardless of their siege.