Don Beyer: ‘Next Steps Depend On Congress’ 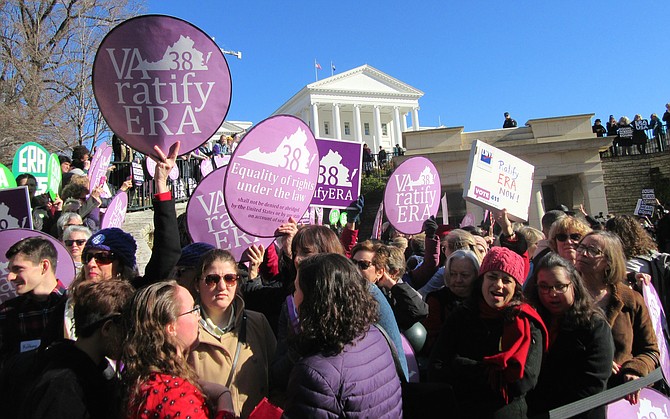 On January 9, 2020, advocates for the Equal Rights Amendment to the U.S. Constitution rallied in Richmond at the entrance to the state capitol as legislators entered to convene on the first day of the 2020 session. Photo by Glenda C. Booth

Rep. Don Beyer (D-8), a longtime supporter of the Equal Rights Amendment (ERA), and cosponsor of legislation to extend the deadline for ratification, issued the following statement after the Virginia General Assembly voted to ratify the ERA:

“Today, Virginia became the 38th state to ratify the Equal Rights Amendment, and I could not be more proud. Ratification of the ERA is long overdue, but it is wonderful that Virginia took the historic step today which brought the Amendment across the three-fourths threshold necessary for ratification.

“I congratulate and applaud everyone in the Virginia General Assembly, including Senator McClellan, Senator Locke, and Delegate Carroll Foy for making this long-overdue legislation a top priority, and seeing it through successfully.

“The recent legal opinion issued by the Trump Administration via the Justice Department makes it clear that the next steps depend on Congress. I am determined to do everything I can in Congress to help pave the way for the final ratification of the Equal Rights Amendment. Equality, justice, and history demand nothing less.”

Beyer is a cosponsor of House legislation to extend the deadline for ratification of the Equal Rights Amendment, sponsored by Rep. Jackie Speier (D-CA). The issue of the deadline was raised most recently by a Trump Administration legal opinion arguing that the ERA could not be ratified because of the expiration of the original deadline. Beyer is also a cosponsor of new Equal Rights Amendment legislation introduced by Rep. Carolyn Maloney (D-NY).

Beyer’s most recent Annual Women’s Conference and Forum focused specifically on the need to pass the Equal Rights Amendment, with a panel discussion that featured speakers from VA Ratify ERA (Virginia’s campaign to ratify the ERA) and the ERA Coalition.

In response to the final passage of the Equal Rights Amendment in the Virginia General Assembly, Rep. Jennifer Wexton (D-10) issued the following statement:

“Today, Virginia sent a powerful message to the rest of the country – that ‘Equal Justice Under Law’ is a constitutional right for women.

“I was a sponsor of the Equal Rights Amendment during my time in Richmond, and I am proud of my former colleagues in Richmond who made this issue a priority in this year’s session.

“This is a historic moment nearly one hundred years in the making. Thanks to the tireless work of so many trailblazers and activists over the years, women – finally – are one step closer to being included in our nation’s founding document.”