Cracking Down on Predatory Student Lenders 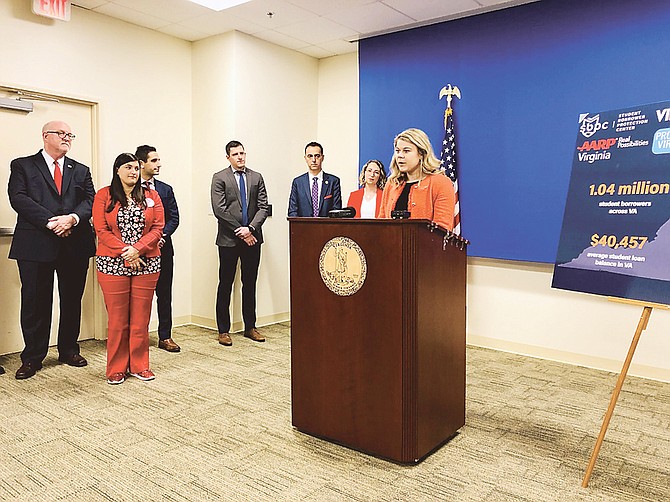 Katlyn Weiser speaks at a press conference in Richmond in favor of a bill designed to crack down on egregious practices of student loan servicing companies.

As a high school student, Katlyn Weiser dreamed of attending George Mason University. She wanted to have a career in public service, being in the room where it happens on Capitol Hill. But instead, she found herself under a mountain of debt, struggling to keep up with meeting minimum payments and ultimately being forced to make a difficult decision about her future. She says she’ll never forget the day when an agent from loan-servicing company Navient told her that she should probably drop out of school to pay off her student debt.

Weiser did not listen. She didn’t drop out, and she’s now a senior at George Mason University. She says she has determined that she can’t afford a career in public service, so she plans on being a lobbyist instead. She’s one of the student borrowers state Sen. Janet Howell (D-32) wants to help with a bill she calls the Borrowers Bill of Rights. It would use the power of the State Corporation Commission to crack down on what she calls the egregious practices of student loan servicing companies.

“We can regulate these student loan servicers to ensure we’re protecting our borrowers from shady practices, and believe me, there are shady practices,” says Howell. “Every other type of debt is regulated in Virginia except student loans debt. This lack of regulation is egregious, given one million borrowers are collectively carrying more than $41 billion worth of student debt.”

DEMOCRATS HAVE WANTED to crack down on student-loan servicing companies for years, but the Republican-led House of Delegates has blocked the effort. Del. Marcus Simon (D-53) has introduced legislation to have the State Corporation Commission regulate student-loan servicing companies for years only to be blocked by the GOP majority over and over. Even when Howell was able to get similar legislation through the Senate, Simon found that the Republican-led House was not interested.

“It’s interesting that a number of delegates who have been sympathetic but didn’t think this was the right solution voted for the bill in committee this year,” said Simon. “So I think we’re on a glider path here, although there are a few people who continue to believe that we shouldn’t be helping out students for whatever reason.”

This year, Democrats are in control of the General Assembly. That’s opened the floodgates for a number of issues, and cracking down on student-loan servicing companies is one of them. Howell’s bill cracking down on student loan servicing companies passed a Senate committee with a unanimous vote. And Simon has a similar bill that’s already passed the House with an 84 to 15 vote.

THE BILL REQUIRES student loan servicing companies get a license to operate in Virginia from the State Corporation Commission, which would crack down on egregious practices like misrepresenting the amount of money due, recklessly applying loan payments to outstanding balances and failing to report payment history to consumer credit bureaus. Violators would be hit with a $2,500 fee.

“This bill is not about free college,” said Seth Frotman, executive director of the Student Borrower Protection Center. “This bill is about making sure borrowers in the commonwealth who took on debt to chase the American dream aren’t ripped off in the process.”

All of the egregious practices outlined in the bill are already illegal, but borrowers would have to hire a lawyer and file a federal lawsuit to take action, which is not a workable solution for people who are already under a mountain of debt. Instead, this bill makes these actions a violation of state law and empowers the State Corporation Commission to go after bad actors. That way borrowers who feel they’ve been wronged could file a complaint with the Bureau of Financial Regulation.

“Why are Virginia borrowers having to resort to lawsuits for their consumer protections?” asked Del. Cia Price (D-95). “It is past time for student loan borrowers in Virginia — like me — to have common-sense protections.”