The Work of Bees, Birds and Butterflies Officially Recognized
Votes

The Work of Bees, Birds and Butterflies Officially Recognized

National Pollinator Week notes the importance of pollination to the food chain. 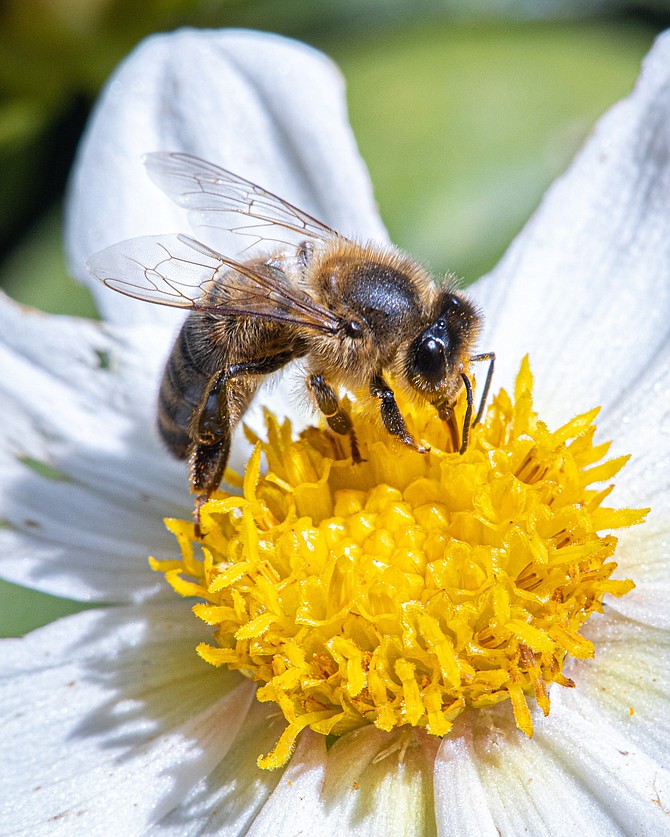 Bees are just one of the pollinators needed for the foods we eat.

The end of June marks the final phase of flowering in the gardens and honey production in the beehives, and these acted as backdrops of National Pollinator Week, June 22-28.

The list of pollinators in Northern Virginia includes butterflies, bees, birds and other insects, but they are up against habitat depletion and pesticides, so it seems like an uphill battle. The honeybee is one species of pollinator suffering from the varroa mite, a tiny insect from South Africa, real small mites, that feed on the fat bodies of bees so the bees get viruses that lead to a depletion in the species.

Kathryn Krenn is a beekeeper in Annandale and an active member of the Northern Virginia Beekeepers Association, based in Fairfax County. Their monthly meetings are held in the Mason District Government Center. Krenn has 10 to 15 hives in various places throughout her community, and "in the next week or so, those of us who have hives will be harvesting," she said.

Krenn uses her honey in recipes or gives it away to friends, and has sold it at outdoor events in the past but this year, a lot of events were

Pollinators are vital to the production of fruits and vegetables.

cancelled due to the Covid-19 virus. "Unfortunately this year there aren't many," she said.

There are about 325 members in the Northern Virginia Beekeepers Association, and most started out as gardeners and branched out to keeping hives. It is an "amazing and fascinating hobby,” Krenn said, "amazing insects." For anyone interested, she recommends watching "More Than Honey," a movie about bees. On the movie website, they quote Albert Einstein: "If bees were to disappear from the globe, mankind would only have four years left to live," he said.

In Virginia, honeybee pollination of apple trees contributes more than $20 million annually to its economy, and Maryland is home to more than 400 species of bees that are essential to food production. According to CropLife America, pollination accounts for one in every three bites of food we eat. “Without those pesky bees, we wouldn’t be able to enjoy the majority of the fruits and vegetables we’ve come to love like cucumbers, squash, watermelon, berries, apples and so many more,” said the CropLife spokesperson Paige Berger.

Nalls Produce in Franconia recognized National Pollinator Week as well, recognizing a passage by the Senate 13 years ago. Senate Resolution 580 read: “Recognizing the importance of pollinators to ecosystem health and agriculture in the United States and the value of partnership efforts to increase awareness about pollinators and support for protecting and sustaining pollinators by designating June 24 through June 30, 2007, as `National Pollinator Week'.