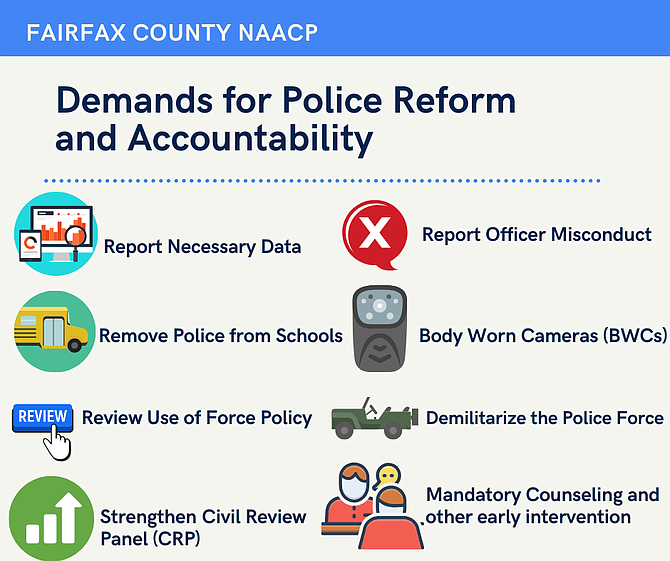 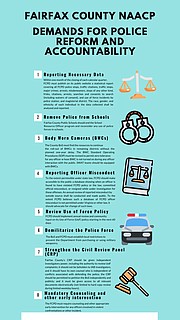 At a Town Hall meeting on Tuesday, June 16, the Fairfax County NAACP unveiled the following vision and demands for police reform:

1) Reporting Necessary Data. Within one month of the closing of each calendar quarter, FCPD must publish on its public website a statistical report covering all FCPD police stops, traffic citations, traffic stops, major crimes, arrests, misdemeanors, stops of any other kind, frisks, citations, arrests, searches and consents to search (including waivers of consent), and use of force incidents by police station, and magisterial district. The race, gender, and ethnicity of each individual in the data collected shall be analyzed and reported.

• The Fairfax County Board of Supervisors (BoS) and FCPD agreed that such information would be provided annually pursuant to Use of Force Recommendation 33 of the Ad Hoc Police Review Commission, Report of the Use of Force Subcommittee, at 33 (Sept. 4, 2015). That information is not publicly available and should be reported quarterly.

2) Remove Police from Schools. Fairfax County Public Schools should end the School Resource Officer program and reconsider any use of police forces in schools.

3) Body Worn Cameras (BWCs). The County BoS must find the resources to continue the roll-out of BWCs in remaining districts without the planned one-year delay. The BWC Standard Operating Procedures (SOP) must be revised to permit zero tolerance for any officer whose BWC is not turned on during any officer interaction with the public. SWAT teams should be equipped with BWCs.

4) Reporting Officer Misconduct. To the extent permissible under state law, FCPD should make accessible to the public a database showing when an officer is found to have violated FCPD policy or the law, committed official misconduct, or resigned while under investigation for these offenses. An annual review of reported misconduct by outside source shall be conducted and made public. To the extent FCPD believes such a database of FCPD officer misconduct is not permitted under Virginia or other law, it should advocate for change of such laws.

5) Review Use of Force Policy. FCPD should implement annual review and community input on its Use of Force (UoF) policy starting in the next 60 days.

• FCPD’s UoF policy was substantially revised in 2015, and its implementation has been studied since then. Additional analysis, improvements and community input are needed to improve the policies and develop a better understanding of these issues (and reduce improper uses of force) across our community.

6) Demilitarize the Police Force. The BoS and FCPD must establish local restrictions to prevent the Department from purchasing or using military weaponry.

• Although we understand FCPD has not participated in the so-called 1033 program, a report should be published on the Department’s website making clear what, if any, military equipment has been obtained by FCPD under any such program. By BoS ordinance, FCPD should be precluded from obtaining or using military weapons against citizens.

• The Federal Government's 1033 Program under which military weaponry has been provided to local police departments should be ended.

7) Strengthen the Police Civilian Review Panel (PCRP). Fairfax County’s CRP should be given independent investigatory power, including the authority to review UoF complaints; it should not be beholden to IAB investigators, and the panel should be allowed to choose its own counsel; the CRP should be permitted to petition the BoS independently and publicly; and it must be given access to all relevant documents electronically so that panel members can review materials most efficiently.