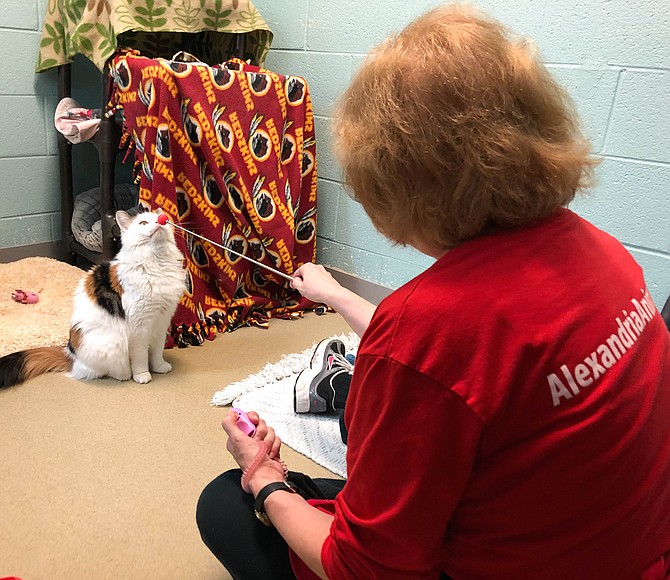 Cookie the cat follows the little red ball in “clicker training” with volunteer Sandy Garlick at the Animal Welfare League of Alexandria. Photograph courtesy of AWLA

A daily “kong” filled with mouth-watering chow makes the days go quickly for Sugar at the Animal Welfare League of Alexandria.

Animal Welfare League of Alexandria (AWLA) volunteer Sandy Garlick sat on the floor of a cat enclosure holding a metal stick with a little red ball at the end. A long-haired, gray and white cat named Nicky, normally a bit skittish around people, reached a paw up to touch the ball, prompting Garlick to press on a clicking device and give Nicky a food treat. Then, they did it all over again. Who says cats can’t be trained?

Nicky was just one of dozens of shelter animals who have learned to respond to the combination of clicking and treats or toys, finding new ways to bond with people. “Clicker training is one of the best ways to build trust between people and animals,” said AWLA Volunteer Program Coordinator Brenda Maier. “They’re learning together and having fun at the same time.”

Volunteer Garlick got interested in clicker-training cats when she witnessed a cat named Coco, who had been a shelter resident for almost a year, learn to do high-fives and walk through a hoop. One day during adoption hours, Garlick showed Coco’s tricks to a visitor, and he was so impressed, he adopted the talented feline. “Coco actually trained me!” Garlick recalled. She attended a shelter session to learn the technique and went on to teach a small gray rabbit named Takeoff to stand up on his hind feet and touch the ball on the stick; he was quickly adopted.

Originally used with marine animals, clicker training has become a staple at the AWLA shelter: all dog and cat volunteers learn the technique, and so do many of those who work with other animals. Besides strengthening positive behaviors, clicker training can help improve an animal’s stay by fighting boredom, decreasing stress, increasing confidence, and teaching new tricks and behaviors that help animals get adopted more quickly.

“After the training, dogs, for instance, start to feel better in their kennels, and a dog comfortable in his kennel is often more comfortable meeting people,” Maier said. “With cats that might be excitable, it’s a way to help them calm down and show them more appropriate behavior.”

To initiate training, a volunteer will wait for a dog to move to the front of his kennel, stand quietly and keep all four paws on the floor. In response, the volunteer will click once and then offer a treat, often a small piece of hot dog. Training sessions can mean five minutes of repeating this activity until the dog understands which behaviors are being rewarded. Volunteers first learn the skill in workshops with expert trainers, where they “train” each other, clicking for desired behaviors and dispensing “human” treats.

The shelter’s enrichment program goes far beyond clicker training. Every day, dogs, cats and other animals receive two rounds of activities that stimulate them both physically and mentally, says AWLA Manager of Volunteers and Community Events Echo Keif, who developed the program. For dogs’ daily enrichment, shelter volunteers dispense kongs – rubber toys that challenge the animals to retrieve the canned dog food inside — and then later, they get another enrichment activity that rotates daily.

Wednesday mornings mean lucky volunteers get to distribute the popular busy-boxes full of treats. Some of the dogs are experts at opening their presents.

Another canine favorite is a Frisbee, coated inside with peanut butter, mashed pumpkin or squeezable cheese, dotted with treats and frozen, that volunteers hang on the outside of each kennel, primed for dogs to lick.

For cats, the everyday treat is “catnip soup,” a set of toys that volunteers have infused with catnip. Later in the day cats can look forward to puzzles such as “snuffle mats,” fabric mats covered with fringe that hides treats (or prescription treats for cats with diet restrictions), ready for foraging.

Even the shelter’s smaller residents, such as rabbits and guinea pigs, get their own custom-made diversions. Rabbits receive “hay tubes” daily – toilet paper rolls stuffed with rabbits’ favorite chow, hay. And as part of the surprise of the day, shelter visitors might see a twine “clothesline” hanging across the rabbits’ pens. Clothespins placed along the line hold juicy bites of vegetables and fruits, tempting bunnies to angle for them through the day. “The first time we hung a veggie line over Phoebe the rabbit’s enclosure she was so delighted,” Keif recalled. “She had been with us for months, and you could see all of her stress melt away with each new veggie she nibbled.”

The shelter’s next challenge, Maier says, is to introduce clicker training for the resident hamsters, turtles, rats and mice. “Since turtles are more visually oriented, we’ll probably use a light instead of a clicker,” she said. “We hope to teach our turtles to swim through hoops.”