Springfield TAGS Circulator Bus Might be on Budget Chopping Block 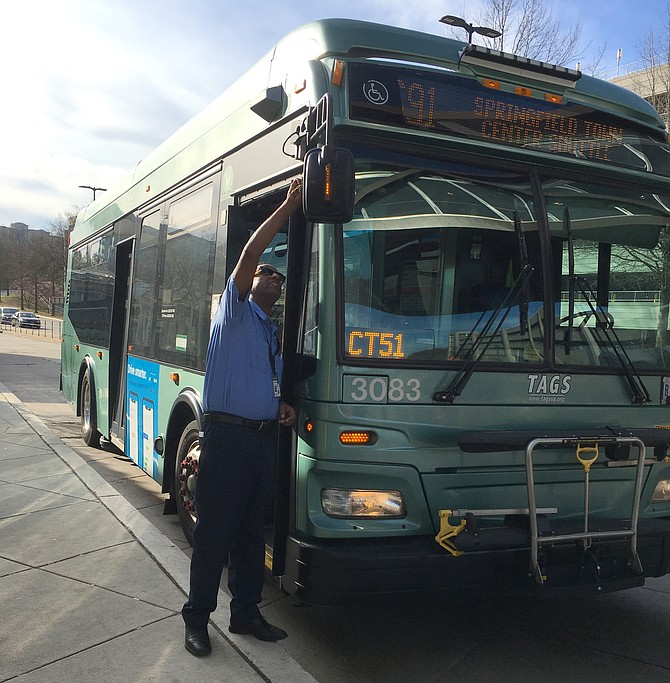 From the Franconia-Springfield Metro station, riders can go on one route towards the Hilton, or the other way to Metro Park. Photo by Mike Salmon.

Local commuters that rely on the TAGS buses to get around central Springfield might have to figure out another way to get to the Metro station or their offices, because the future of this local bus system is in jeopardy with the next budget.

Around Springfield, many of the businesses count on this circular bus system for their employees going to and from the Metro, and students at the nearby Northern Virginia Community College campus. The buses in question are the S80 and S91 buses, which were started years ago as a response to the traffic problems connected to the massive Springfield Interchange Project. The Transportation Association of Greater Springfield (TAGS) buses were the work of then-Supervisor Dana Kauffman and the Washington Metropolitan Area Transit Authority (WMATA). Now Supervisor Rodney Lusk (D-Lee) is trying to save TAGS, and testified before the WMATA board in support of the bus line.

The TAGS routes are an important component of the transportation network of the Springfield community and particularly important to the livelihood of the business community. Several employers depend on TAGS to transport employees between the large employment centers and the Franconia/Springfield METRO station.

TAGS will be an important element when the Transportation Security Administration opens soon, bringing 3,500 new jobs to the Springfield Metro area, said Stanley Koussis, chairman at the Mount Vernon Lee Chamber of Commerce. In a letter to Paul J. Wiedefeld, General Manager and CEO at WMATA, Koussis wrote that “we strongly encourage you to reinstate in the WMATA budget TAGS lines S80 and S91 to facilitate the current and future transit-oriented development in the greater Springfield area.” Lusk noted the TSA impact on the transportation needs in the area too. “The TSA is going to be used by TAGS too,” he said.

In WMATA’s budget, the proposed change is to “discontinue all service,” it said in WMATA’s FY21 Metrobus Changes document, citing their reason as "existing TAGS ridership is low," the WMATA document stated. Average daily ridership numbers were 256 riders per day on the Metro Park loop, which is on Walker Lane, and 65 riders per day on the Loisdale Court loop which heads across Loisdale Road from the Springfield Town Center to the Springfield Hilton. Lusk thought their numbers were flawed, because the various routes, namely the hourly vs the 15-minute intervals, do not take the same number of passengers.

The dollar figure in the budget for TAGS was listed as “$1,364,000 reduction in subsidy.” Local businesses pay some as well and Koussis called it “a prime example of a public-private partnership that should be emulated and not eliminated as the new budget recommends.”

The TAGS question was put out to the public and they had a chance to weigh in before the comment deadline on Monday morning, March 9. Lusk was happy with the high number of comments that were received. “A number of different groups came out in support of TAGS,” he said. According to Ian Janetta, spokesperson at WMATA, “the Board of Directors will weigh public feedback before making their final determination, with a vote likely in April,” he said.

WMATA’s proposed operating budget for FY2021 is $1.97 billion, a 1.5 percent increase from the FY2020 budget, WMATA sources said. The source of these funds is divided into passenger revenue including parking, non-fare revenue including advertising, and local subsidy. The largest source of funding is local subsidy of $1.17 billion or 59.3 percent of total operating funds, followed by passenger fare and parking revenue at $700.6 million or 35.6 percent of total expenses and $101.4 million of operating revenue comes from advertising, joint development projects, fiber optic and property leases, and other revenues.