The Poet’s Girl: A Novel of Emily Hale and T. S. Eliot 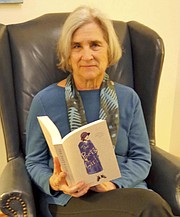 “The Poet’s Girl” details the decades long mercurial romance between T.S. Eliot and Emily Hale. Although they met in 1905, the romance began when Eliot was a graduate student at Harvard in 1913. In one of the 1,031 published letters Eliot wrote to Hale over the coming decades, he told her he had fallen in love with her at that time.

Eliot returned to England for a one-year graduate fellowship at Oxford in 1914 and wrote to Hale while he was gone. She wondered what would happen upon his return, which everyone expected at the end of the year. But while he was there, he unexpectedly married an English woman and stayed in England.

Sarah Fitzgerald explains, “That marriage was a disaster because the wife had mental and physical problems.” In 1932 he left England trying to achieve a formal separation, and when he returned to England, he tried to hide out from his wife.

The letters to Hale probably continued throughout the ’20s, and Hale continued to visit England in the summers with her aunt and uncle. In 1930 there is evidence that Eliot resumed contact with Hale, declaring that he had always been in love with her. She saved these letters beginning in 1930 and they were donated to Princeton and released in January 2020. Fitzgerald, with deep ties to Arlington, says Eliot told Hale he regretted his marriage but had converted to a conservative Anglo-Catholic and viewed himself as the most prominent layman so couldn’t divorce. Hale had to accept a relationship with some intense romantic encounters but not consummated.

Eliot’s wife was found wandering the streets and committed by her brother, and in early 1947 she died. Fitzgerald says everyone thought Eliot would marry Hale. But it was a depressing time for him with coal shortages in England, his brother diagnosed with leukemia, his own surgery postponed, and overall his life was miserable.

When Eliot came back to the U.S., he wrote to Hale that he was sorry he was not up to marrying her. At this point Hale is in her mid-50s and instead Eliot married his secretary, who was 38 years younger. Hale’s response can only be inferred since Eliot had specified that all of Hale’s letters to him be destroyed upon his death. At the time she indicated this just showed he was human. Some speculated she fell apart but there is little evidence of this, as she continued to perform as a talented comedic actor.

Hale had been moving Eliot’s 1,000 letters around with her and when she turned mandatory retirement age of 65 she made provisions that Eliot’s 1,000 letters to her be held by Princeton and released 50 years after the death of the latter. Eliot expressed concern at the time that these letters would leak. Fitzgerald said he was more concerned with the nasty comments his letters contained about friends and acquaintances than about the revelation of their love affair.

In addition, Eliot had left a shocking letter to Harvard stating he had never loved Hale. He said marrying her wouldn’t have allowed him to become the writer he did and she didn’t like poetry, at least not his kind of poetry. “It was nasty. Everyone was shocked; what could have possessed him?” Some think it was to protect his second wife, who might still be living when the papers were released. “People have devoted their careers to unraveling these mysteries.”

Fitzgerald says the question of why he didn’t marry Hale plagues Eliot scholars and is a subject of much debate. Fitzgerald says when she began on the book she wondered if it would be too hard to set up Eliot as a romantic hero and wrestled with a love story without a romantic ending. Some speculate he seemed to have respect as a poet but was terrible at human relations.

Fitzgerald says the germ of the idea for this book originated five years ago in a discussion initiated by her church Sacred Circle whose host wanted to discuss “Burnt Norton,” the first of Four Quartets, a poem by T.S. Eliot she had studied in college. Fitzgerald says it turned out to be an abandoned garden he had visited with Hale in the ’30s and they continued to visit. “As a journalist I thought there is a nugget of a story there.”

Only in a world of speculation.”

Fitzgerald moved to the National Journal in 1975 from the St. Petersburg Times, then on to the Washington Post from 1979-94. She has previously published romantic fiction and is currently working on a non-fiction book which explores sex discrimination in Federal contracts back in the ’70s before the passage of Title IX.

Fitzgerald says it has gratified her that Eliot scholars have an appreciation for how much she knows about Hale because they haven’t studied her. “I knew with the release of the Eliot letters that the focus would be on Eliot and I wanted to have a presence for her.”