Pastries by Randolph Reopens with a New Normal in Arlington
Votes

Pastries by Randolph Reopens with a New Normal in Arlington 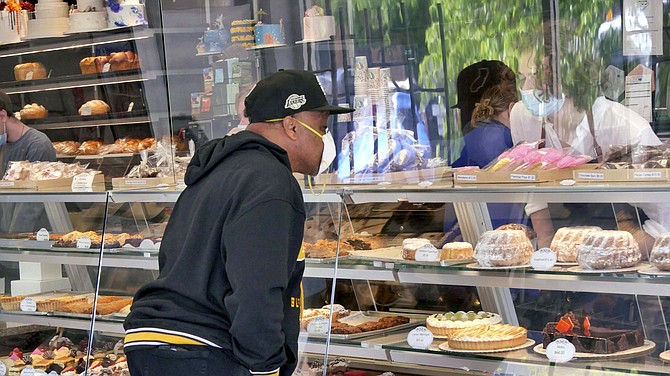 A Randolph’s customer stares through the new plexiglass barriers as he selects his cupcakes for Mother’s Day. Photo by Shirley Ruhe.

Gold balloons blew in the wind outside the open door of Pastries by Randolph the week before Mother’s Day. Randolph’s had been closed since March 23 due to the coronavirus and just reopened on May 5.

Randolph’s has been in business for 30 years at the same location at Lee Heights Shopping Center. When the pandemic hit, business dropped 50 percent in that first week.

Penina Randolph says, “we had to pause and figure out what to do.”

Randolph says, “When we reopened we had no idea what to expect.”

She says, “Our business was run off large cakes and people aren’t having large functions anymore and weddings are delayed.” She says they expected to have the individual pastries sell.

“Actually we were surprised, the cakes went first. We sold out the 85 mousse cakes. I guess people just wanted to have the whole big cake for Mother’s Day.”

Penina says, “we had a great week back but when you are gone six weeks, the biggest fear is that the business will dwindle off. We’re hoping that with graduation season, people will decide to have a party in their home, maybe not 24, maybe just 6.”

Penina says it was a big headache putting all of the changes in place without knowing how it would all work and wanting the new system to move smoothly. But she says people were patient and seemed to understand the new way of doing business.

The number of employees are currently down to 30 from the former 50, “because some don’t feel comfortable coming back.” Penina explains, “we shut down originally because of the safety of our teams without a plan in place.” Then. “after 6 weeks, we decided this will be the new norm, not quarantine for 14 days and everything is good and dandy.” So they thought if they were going to get back in the water, why not now.

Now the bakery has taken on a new configuration with floor markings limiting the number of customers to four at a time, replacing the crowds that used to line the pastry cases. But the cases are still filled with the Napoleons, marble mousse cake, brioche, French and Italian pastries and tiny tea cookies. The order book detailing wedding creation choices sits nearby.

Staff behind the counter are also limited to four and are separated from the customers by a plexiglass sneeze guard. They have their masks, hand sanitizer and are waiting for the face guards to come in.

Randolphs has established curbside pickup for preordered, prepaid items. “We have 20 designated spaces in the back parallel to the building for curbside service.” Penina says they are also working on a delivery option that they hope to have in place soon.

About half of the business is catering and big hotels. “We were just taking one hit after another since people aren’t having big parties and hotels aren’t having events.”

Now they just wait and see what happens. This is the new norm.