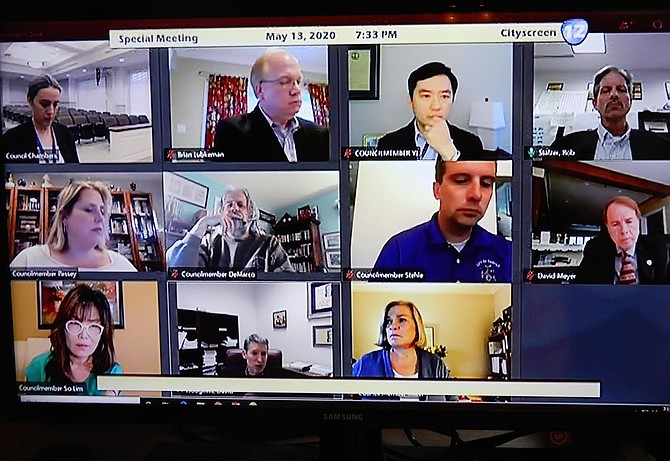 When City Manager Rob Stalzer first presented his proposed budget in February, it showed General Fund revenues and expenditures equaling $153.6 million, rising 5.7 percent over FY 20. But in response to the virus – which caused sharp income losses for Fairfax residents, businesses, and the City, itself – he had to dramatically revamp and cut the budget.

THE TOTAL FY 21 budget for all City funds (General, Wastewater, Stormwater, Old Town Service District, Cable, and Capital) is $166.8 million – a 1.8-percent decrease from FY 20. It also includes plans for $5.5 million in short-term borrowing for the FY 21-25 CIP (Capital Improvement Program) of $95 million, which could be done over multiple years.

Furthermore, the budget contains nearly $8 million in expenditures held in reserve, such as funding for: 3.5-percent employee, merit-pay increases; more full-time positions; alleviating salary compression; two small-area plans; and reduced contract services and operating costs. Personnel actions include a hiring freeze, eliminating temporary positions, possible furloughs, layoffs and retirements; suspension of two holidays, and freezing overtime. Budgeted expenditures held in reserve will be evaluated quarterly, with the hope that as many as possible may be reinstated when the City’s revenue picture improves.

However, the wastewater tax rate will increase 8 percent. Finance Director David Hodgkins said last week that doing so will generate an estimated $650,000 for the City’s wastewater fund. “With revenue shrinking, we need to increase the rates to be able to pay our share of the wastewater-treatment plant maintenance,” he explained.

Councilmember Sang Yi asked why the hike was necessary. If not, replied Hodgkins, “This would send our fund balance in the wrong direction, and the credit agencies might not like it. And it would increase our debt for FY 21.” The Council then approved the increase, 4-2, with Yi and Councilmember So Lim voting no.

REGARDING THE REAL-ESTATE tax rate, Stalzer initially proposed a 3.25-cent increase, raising the current rate of $1.075 per $100 assessed valuation to $1.1075. He later rescinded it, keeping it at $1.075. Again, Yi balked, noting that “residents are hurting now” and many have filed for unemployment.

“People’s home assessments have gone up, so they’re paying more in taxes,” said Yi. Arguing for a half-cent lower, real-estate tax rate, he said, “I just want to give people as much relief as possible. A couple hundred dollars to a family of four means a lot.”

But Councilmember Michael DeMarco supported the rate increase. “I know it’s a challenging time,” he said. “[But] if things turn around, future Councils will still have to make tough decisions about what items to bring back from reserve.”

“This year has been hijacked by COVID-19, and it’s been a difficult and uncertain time,” added Councilmember Janice Miller. “But because of the uncertainty, I believe we need to leave things in place so we can keep providing the services, like public safety, our residents are used to.”

Ultimately, both this tax rate and the overall budget passed, by 5-1, with just Yi voting no. The budget also retained a 12-percent undesignated fund balance supporting the City’s AAA bond rating.

“The City and its residents get great value for what the citizens provide in taxes for leaf-and-trash pickup, snow removal and public safety,” said Mayor David Meyer. “City staff always tries to make the most of the money we have, and the citizens recognize that. It’s remarkable how much we do, for so many people, for a reasonable tax rate.”