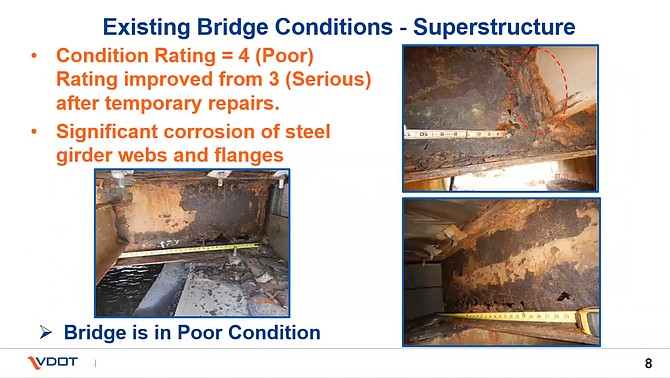 According to the Virginia Department of Transportation, the existing Springvale Road bridge over Piney Run in Great Falls is in poor condition and deteriorating fast. Screenshot

Accident history details a total of 41 accidents, 11 of which were injury crashes.

The no median option.

The median option places the bridge closer to the pedestrian bridge.

The Springvale Road (Route 674) bridge over Piney Run in Great Falls may not perform at the current reduced load carrying capacity for an extended time, according to a report shared during the Oct. 21 Virginia Department of Transportation virtual public information meeting. Dipali Patel, Project Manager Structures and Bridges, who provided details at the virtual public information meeting, said the existing simple span bridge with steel beams and timber plank deck overlaid with asphalt had been rated in poor condition.

During a bridge inspection in April of 2020, it was determined the bridge was in serious condition and would require strengthening to avoid closure. "Even with the temporary repairs due to the poor condition of the bridge and the severe corrosion...the load carrying capacity...has been reduced to 15 tons," Patel said. She added that the existing roadway did not pass the five-year storm, and neither would the proposed roadway pass the five-year storm benchmarks. Water would flood over the bridge.

The project's purpose is to improve safety based on a summary of crash data. Between 2000-2019 there were 41 crashes, 39 percent of which were rear-ending collisions, and 7 percent side swipe type of accidents. A two-lane bridge would remove the need to stop, and a wider bridge would minimize side swipe accidents.

THE NEW PROJECT would replace the one-lane Springvale Road bridge over Piney Run with a two-lane bridge. VDOT considered two options for the project. Patel said that the first proposed roadway plan was the no median option, to widen the bridge to two lanes with two, four-foot-wide shoulders. The other proposed roadway plan was the median option, to widen the bridge to two 11-foot lanes separated by raised or splitter island medians with two, two-foot-wide shoulders. This plan was two feet wider than the no median option and a little closer to the pedestrian bridge. "The total length of the project will remain the same for the no median and the median options," said Patel.

The existing pedestrian bridge would remain; overhead lines and light poles possibly relocated underground, and the existing water main and fire hydrant anticipated to stay. "A complete closure of the bridge will be required... maintenance of traffic details will be provided at the public hearing stage," said Patel. The expected construction time was six months, and a partial closure or phased construction was not possible.

According to Patel, the scope of work was constrained to a bridge with minimal approach roadway work due to the limited availability of funds. The anticipated project cost was between $4 million and $5 million. "The funding source will be determined after public engagement. This bridge does not qualify for State of Good Repair funds," Patel said. The bridge measured one foot shy of the required 20-foot length for State of Good Repair funds. She added that Bridge Maintenance funds might be used. The link to see plans and designs for the Springvale Road over Piney Run Bridge Replacement in Fairfax County is https://www.virginiadot.org/projects/northern-virginia/springvale-over-piney-run.asp.

Patel asked that when the public provided comments, they considered the traveling public's safety, project limits, cost and timeline, traffic calming measures, driveway access, codes, and regulations. As for what was next, among other things, VDOT would solicit and evaluate community feedback, and once funding was identified, the project could move forward.

THE GREAT FALLS CITIZENS ASSOCIATION had formed a Bridge Working Group on the Springvale Road Bridge. At the Connection’s press time, GFCA understood that VDOT might confirm an extension of its comment deadline initially set to end Nov. 2. Given such, the public could continue to submit written comments via the VDOT study website at https://bit.ly/2HKEIGA, by mail to Ms. Dipali Patel, P.E., Virginia Department of Transportation, 4975 Alliance Drive, Fairfax, VA 22030 or email meetingcomments@VDOT.virginia.gov. Reference "Springvale Road over Piney Run Bridge Replacement" in the subject line.

Several members of the GFCA Bridge Working Group posted comments on the Springvale Road Bridge on the organization's website.

"Expanding this bridge would exacerbate this problem and you might find traffic almost completely at a standstill and backed up to Old Dominion or Riverbend. This will have the effect of diminishing the character of the community—Great Falls is known for being a more rural part of the County." – Don Bouchoux

"My first concern is safety – cars are going faster and faster on Springvale Road, and if we make this a two-lane bridge, that will only increase the speeds along this stretch." – Mike Callaghan

"We want to come up with a safe bridge that will preserve the character of the community. The Great Falls Citizens Association is sponsoring this investigation. If anyone is interested in this process, we urge them to contact us at https://gfca.org/." – Bill Canis

"VDOT will be extending the deadline for comments associated with the first virtual public meeting to Nov. 21, 2020. This will be 30 days. The closure of the comment period for the first public meeting allows us to summarize and assess the comments received at that time. (A snapshot in time.) We anticipate having extensive public outreach and holding more meetings with the community. Comments can be submitted at any time. We welcome feedback," Runco said in an email.