Returning to the Balance of Nature in Great Falls
Votes

Returning to the Balance of Nature in Great Falls 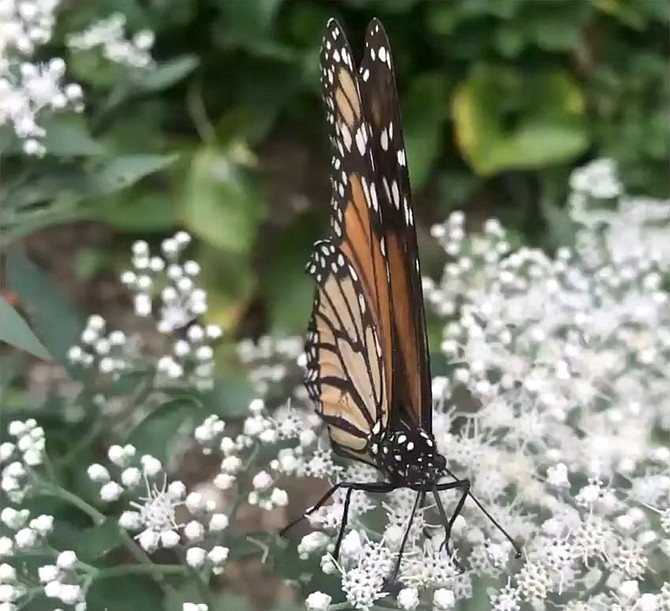 A photo by McGinty of her thriving native plant garden. Where once was lawn three years later is home to butterflies and songbirds, in addition to skinks, toads, native insects, hawks and more. Screenshot 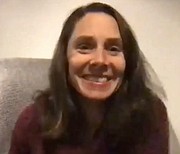 Meghan M. McGinty, a botanist with a PhD in Ecology and Environmental Biology.

On Oct. 19, the Environment & Parks Committee of the Great Falls Citizens Association presented Native Plants by Dr. Meghan M. McGinty, a presentation she'd been dreaming about for years, McGinty said. Hosted by committee co-chairs Winnie Frost and William Denk, McGinty shared how she is restoring native plant gardens to sections of her property, from removing invasive plants to re-establishing forests and meadows.

During the hour-long program, McGinty listed plants that occurred naturally in the Great Falls ecoregion along with their values. McGinty peppered her comments with examples of how she converted her lawn's cultivation into a native garden of biodiversity. The one-species crop provided no floral resources to feed birds and insects. "It's been an amazing transformation in just three years," she said.

McGinty said they made several changes to the property. They stopped using chemical pesticides, added birdbaths, removed invasive plants allowing natives to establish and participated in the Wildlife Sanctuary Program. According to McGinty, Plant Nova Natives is a campaign that solely promotes native plants. Spearheaded by Margaret Fisher, it offers instructional videos helping individuals with their "native plant challenges."

Next, McGinty spoke about Fairfax County's Resource Protection Areas (RPA). "Every stream, water, pond or lake should have a 100-foot native plant buffer around that water source. The goal... is to remove pollutants from the stormwater runoff," McGinty said.

THE PUBLIC can view RPA boundaries by filling in the street address on the County's website. McGinty learned her property was between two watersheds. While there were no streams on her land, she considered it a "stepping stone" contributing to the region's healthy streams and groundwater and those beyond.

"It really was a transformation from a seemingly lifeless lawn, to what is now buzzing with bumblebees and butterflies and songbirds… I think the most impressive thing for me has really been the diversity of butterflies."

—Meghan M. McGinty of Great Falls, a botanist with a Ph.D. in Ecology and Environmental Biology

Turning her attention to specific native plants that proved best for the challenges of Great Falls gardening, ones that reduced erosion, resisted deer browsing and offered year-round foliage while tolerating a range of conditions, McGinty said she had no idea what "browsing" was like until she moved to Great Falls." It's truly astounding, the level of browsing consistently throughout the year, not to mention their antlers, rubbing against the trunks," she said. McGinty offered as choices the Christmas fern and marginal wood fern, saying they resisted deer browsing and spread underground with rhizomes, thereby stabilizing the soil. Horsetail would need moist, rich soil. Robin's plantain, a perennial wildflower, "spread wonderfully." Partridgeberry, a trailing evergreen herb with white flowers, proved very slow growing but was a beautiful evergreen. The lyre leaf sage, an upright hairy perennial with large basal leaves purple-tinged in the winter, reseeded, naturalizing very well. Foamflower did get a little wilted in the winter but "hung in there," according to McGinty.

Other native plants that would do well in Great Falls, which reduced erosion, proved somewhat resistant to deer browsing and were shade-tolerant but were not evergreens, included yellow sedge and American alumroot. The Jack-in-the-pulpit plant fell into this grouping; however, McGinty said she could not grow it since it preferred rich, moist soil, "loamy" not her clay. The buttonbush McGinty noted was a large shrub and a great wildlife plant.

As for sun-tolerant native plants, McGinty mentioned grasses but cautioned to be sure they were native. Paw paw could only tolerate sandy soils like a riverbank stream. The vigorous growth of bee balm would be a sure bet for butterflies. "I discovered this year, every node that touches the ground roots in," McGinty said.

SUNNY HABITAT GARDENS attracted songbirds and butterflies. “If you build it, they will come,” McGinty said. When attracting hummingbirds, McGinty recommended planting natives for year-round-nectar, red columbine and cardinal flower for example. McGinty said one of the things she wanted to highlight was that hummingbirds rely on the nectar's sugars. It is used to fuel their energy and high metabolic rate. "It's like their coffee," she said. Hummers eat insects. Just as crucial as offering nectar plants in the garden were plants that hosted a balance of insects. "We want a balance of beneficial and what we consider pests. In those environments we can also provide food for the hummingbirds," said McGinty.

Native Plant Sale – We have a native plant sale, usually the last Saturday in April or the first Saturday in May...anywhere between 800 to 1,000 native plants, and... between 30 and 40 different species...We start the pre-ordering process generally around Jan. 15. – Hugh Morrow

Transitioning Lawn to a Native Plant Garden – I planted the shrubs and the trees the first year...All around that, I laid down cardboard, right on top of the grass, then a very thick, two-inch layer of mulch. The benefit of this strategy is everything underneath is going to decompose. You have a great thick layer of organic matter. When you go plant next spring or next fall, you have earthworms; you have some organic matter; you've got some black soil. – McGinty

Plant Rescue – When we have a subdivision being built, or some type of construction, it is often an opportunity for us to go in and rescue certain plants that otherwise would be totally obliterated and sent to the dump...There is a new senior assisted living home that's going to be built...I know there are a lot of native tree saplings in there. – Bill Canis