At the Tipping Point and Winter is Coming in Great Falls

Beloved local restaurant needs customers to be with them now. 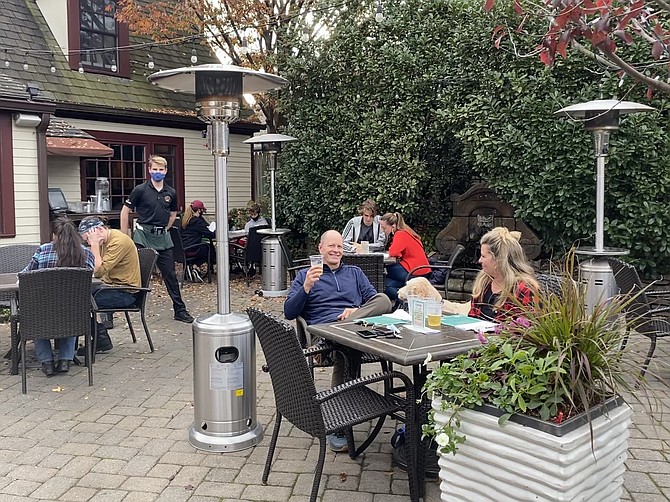 Customers return to the Old Brogue, an Irish Pub in Great Falls as temperatures head toward the high 60s on Sunday, Nov. 15. Still, with cold weather on its way, owner Mike Kearney worries about the restaurant operating below its socially distanced capacity. Photo by Mercia Hobson. 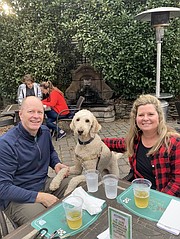 Brian Daum and his wife Rosemary with Rambo, their dog, enjoy a drink on the front patio of The Old Brogue, an Irish Pub in Great Falls on Sunday, Nov. 15."We were hiking in Great Falls and came to our favorite place. We were so impressed by how nice the patio looked, the lights, the firepit, the heaters," said Rosemary. "Thanks for staying open. We love it; we look forward to spending many more afternoons here," said Brian.

Indoor and outdoor dining areas remain below capacity or empty as seen on Sunday, Nov. 15.

Proprietor Mike Kearney of The Old Brogue, an Irish Pub in Great Falls, made a live video of his restaurant on the evening of Friday, Nov. 13. With the County's and the Commonwealths' coronavirus infections trending upward and cold weather approaching, he wanted to show everyone how sad they were that night. "A lot of you know me. I've been here for 40 years. We've been taking COVID-19 very seriously since it began," Kearney says in his live clip. He holds up his cell phone camera and films an empty parking lot with picnic tables for people who want to socially distance and the entrance where customers arrive. He films the outdoor front patio where he invested in three fire pits, two sofas, three outdoor heaters, and "a lot of nice tables."

Then Kearney turns his cell phone camera to the 28 employees there for the evening shift standing beside General Manager James Monroe, who'd been at The Old Brogue for thirty-three years and chef Alex Murillo-Ortiz, eight years. “They’re all standing here. You know why? Because there are no customers...What's going on?...It's a nice night, and there's nobody at this restaurant...We're truly trying our best, but obviously something else is going on that we cannot control. If you really want us to be here for you, we need you to be here for us," he says.

According to the Independent Restaurant Coalition, if the U.S. Senate does not pass a relief bill similar to the House's revised Heroes Act, it could lead to the closure of 85 percent of small restaurants by the end of the year. On Oct. 1, Congressman Earl Blumenauer, Oregon's 3rd congressional district, tweeted, "The House just passed our RESTAURANTS Act, a $120 billion lifeline to help 500,000 independent restaurants and their 11 million employees survive the pandemic...The Senate must join us to #SaveRESTAURANTS.

IN AN INTERVIEW two days after Kearney made the video, he said that the rainy weekend before the dreaded Friday, business fell 40 percent with a drop of $20,000 in sales because of the weather. The next week, it was beautiful in the 70s, and they went back up to $20,000. "How are we supposed to prepare for this? It's just so difficult," he said.

According to Kearney, while they had constantly, almost daily, been readapting since March 17, trying to keep the community happy, his number one thing about being a successful restaurant operator was how to retain staff. Before COVID, he had 84 employees, now 60. According to Kearney, for some, it was time to move on, others couldn't do it anymore, and some had health risks. Fiscally, the remaining employees knew the weekly goal. Kearney said they weren't talking about making money anymore, but what they could afford to lose.

Kearney voiced his frustration at being concerned for several weeks now, knowing that winter was coming, and the weatherman had to be his best friend to maintain customers. Kearney said he had done everything he could to keep the business afloat and invest in best practices to mitigate COVID-19 concerns, protecting the health and safety of The Brogue's customers and workers.

THE BROGUE offered curbside and delivery services and five socially distant dining options. Kearney implemented temperature checks and required contact information from at least one person at each table. He directed all servers to wear masks and guests to wear theirs if leaving their table. Kearney installed traffic flow floor markers, practiced social distancing in table arrangements. He installed plastic shields around indoor booths and banned sitting at the bar. Kearney increased indoor ventilation by opening doors, and to give customers even more confidence for inside dining, installed medical air scrubbers and UV lights in all heating and air conditioning ducts. Soon a hydrogen peroxide generator, similar to those used in hospitals as an airborne disinfectant and infection control measure, would be installed. Finally, he trained staff on how to safely clear tables and disinfect them.

"It's been a very difficult year on so many levels...Then it came to this Friday night...I just said, I have to tell the world about this because this is the start of what my wife really says is the final rush. We've got to make it to spring...There will be a vaccine out."