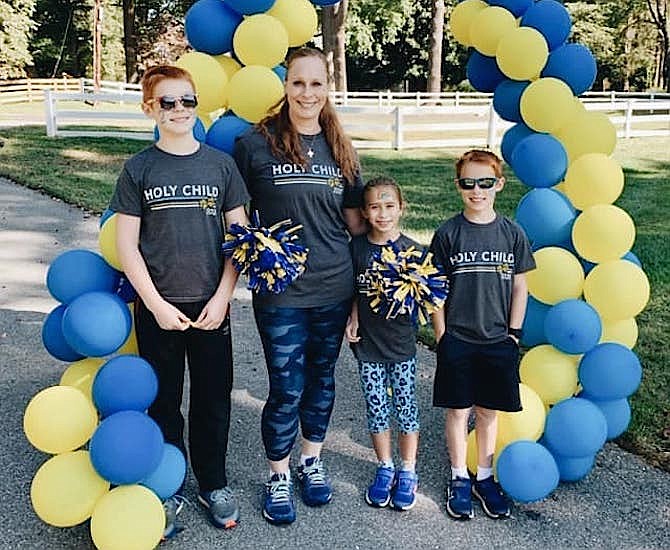 Members of the Holy Child community participating in the Virtual 5K, from the school’s Facebook page.

Change is the way of life for 2020, and the Holy Child annual Tiger Trot changed with the times.

This year the 5K fun run was held as a virtual race and could be run anytime between Friday, Oct 2 and Sunday, Oct. 4, either indoors or out, on a track, or through a neighborhood. Wherever.

“It’s a really fun event and we’re kind of saddened that we have to have it virtually, but we are excited,” said Lisa Terminiello, a member of the organizing committee along with Caren Garayta, Christy George, and Gina Whitney. “It’s just different.”

“Having it be virtual is something new for us,” Whitney said. “It’s been a bit of a learning curve.”

Last week’s Tiger Trot was the 10th annual at the Connelly School of the Holy Child on Bradley Boulevard in Potomac.

The run is a combination fundraiser and team builder for the students, coming at the end of Tiger Week, the school’s annual spirit week. This year spirit week, too, was held virtually though students had started in person classes.

“It just started this week with two cohorts, A and B. A goes two weeks, then B goes,” Terminiello said. “Everyone just wants to be there; it’s a bummer.”

Participants in the Tiger Trot got to select the locale for their run, though they were also encouraged to join virtually in the main events on Sunday, October 4th. The day started with a virtual warm-up at 8 a. m. and closed with a virtual Mass broadcast from the school’s Chapel at 11 a.m.

Usually the run is held between the two, Terminiello said.

Response to the virtual race was “pretty good,” according to Terminiello and Whitney. Final numbers were not in before the race because runners were allowed to register up to race time this year.

Many people posted photos of the school Facebook page showing great enthusiasm for the event. Students, faculty, and families all came together to make this unusual race in an unusual year an unusual success.