Board of Supervisors offers unanimous support 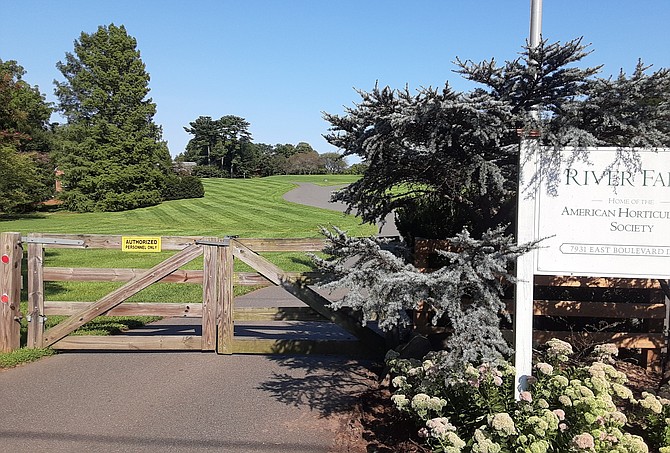 The American Horticultural Society’s intent to sell historic River Farm is still sending shock waves through those who believed the property and house were preserved forever. River Farm, northernmost of George Washington’s five farmhouses, has a complicated history that was supposed to end with the horticultural society’s purchase of the property with the help of Philanthropist Enid Annenberg Haupt in the early 1970s, under the condition that the property remain open to the public.

“This is a stunning announcement,” said Mason District Supervisor Penny Gross. “The society was able to purchase the 27 acres agreeing to keep the property open to the public. That was a commitment to the public. It is imperative that we work to create whatever needs to be created to maintain this as something for the public.”

Mount Vernon Supervisor Dan Storck informed the Board of Supervisors during its meeting on Oct. 20, 2020. Storck and Chairman Jeff McKay hope to save River Farm through historic designation.

“We believe we have a once in a lifetime opportunity to preserve a piece of our nation and our country’s history, but first we must collect all the information needed about the preservation process, timeline and legal implications to ensure sound, long-term decisions,” said Storck.

Storck hopes to partner with the AHS Board, a divided board he said, “for them to slow down this process and give us time to come up with solutions that will allow River Farm to remain publicly accessible and not be sold to a private developer.”

The Department of Planning & Development Heritage Resources staff will create an expedited Historic Overlay District for River Farm. “We further direct Heritage Resources staff to assemble and provide all this information and deliver it no later than three weeks from today’s date,” Stock said during the Board Matters portion of the Board of Supervisors meeting on Tuesday, Oct. 20.

County staff has already started this process and the deadline is feasible, according to Storck.

“But the only real protection is for the AHS board to work with the community to preserve what’s there,” said Storck. “They have to be willing to work with us.”

A public body or park authority would not be able to pay more than the appraised value, a reported $18.2 million.

McKay said the situation was unusual and urgent.

“Given the sense of urgency here, and our opportunity and the narrow window we might have to have an impact here I think it was important to do that,” he said.

“This is going to require some level of creativity at some point to save,” said McKay. “We certainly can see all the options this Board could pursue. We need to have a wide open conversation about that to make sure we are using all the flexibility we possibly can to save a treasure here.”

“The only real protection is for the AHS board to work with the community to preserve what’s there. They have to be willing to work with us.”

PUBLIC OUTCRY has been huge.

“It’s sort of stunning to try to figure out the philosophical approach that the AHS has always had and then says, ‘Oh let’s sell it for development. It's diametrically opposed to what we thought was their philosophy,” said Gross.

“When this stunning announcement was first made we all heard from people who said the county has to buy it. Well, that’s not necessarily the approach, it needs to be preserved, it needs to be saved, it sounds like this is the approach we would need, but time is of the essence.”

AMERICAN HORTICULTURAL SOCIETY made its announcement on Sept. 4, 2020, and continues to defend its decision.

The majority of its Board, they said, called the sale, ““the most viable option to allow for the continuation of our national nonprofit during very difficult financial times,” said Terry Hayes, AHS Board Chair..

“The proceeds from the sale of River Farm will be used to create a significant endowment which has been the missing link in our financial viability. And so, the time has come,” said Hayes. “As we prepare to pass on the stewardship of River Farm, we share the community’s hope of finding a new owner who will work to preserve and protect this beautiful and historic property.”

After a series of different owners and different names, the Soviet Embassy offered to buy the property in 1971 for use as a retreat for its staff. But during the Cold War, “many across the world objected to the thought of George Washington’s farm becoming the possession of the Soviet Union,” according to the board matter Oct. 20.

“As a result, Congress and the State Department asked Mr. Matheson to withdraw the property from the market,” according to the Board Matter.

“AHS has long sought to make River Farm a living representation of its principles and organizational vision of raising awareness about and fostering sustainable, earth-friendly gardening and horticultural practices. Thus, we were greatly shocked and saddened by the news on September 4, 2020 that the AHS Board of Directors intended to sell the River Farm property,” said Storck.