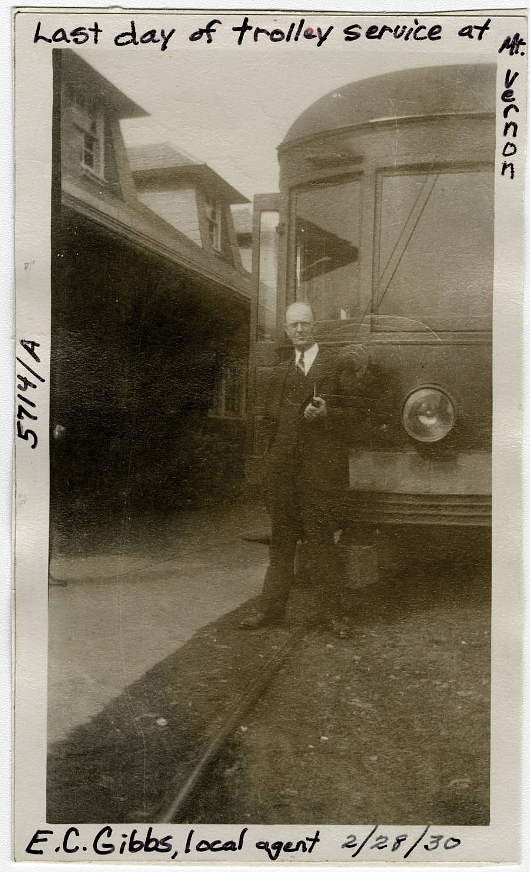 At one time in Mount Vernon’s history, skirting around the depression years, the ladies of Old Town rode the trolley down to Mount Vernon and 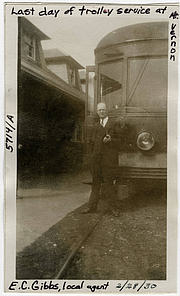 visited the tea room for some Earl Grey and crumpets.

Faded black and white photos show the train and the tea house somewhere near the present day circle where the parkway ends at George Washington’s Mount Vernon. Along came the automobile and the paved parkway, and there’s no sign of the trolley line from those days.

As the story goes, the railway/trolley line ran from Pennsylvania Ave and 13th Street, NW, right to the circle here at Mount Vernon. The tea room and station were operated by Charles Edward Gibbs and Annie Laurie Hemphill Gibbs. Mrs. Gibbs was the telegrapher and Mr. Gibbs was the freight station agent. They were succeeded by their son, Edward Curtis Gibbs and his wife, Louise McGirrpaff Gibbs in 1924. They kept the line in operation until 1932.

All signs of this trolley line seem to have disappeared, fallen victim to weather, kudzu and time. Fort Hunt resident Hal Nesbitt lives along the old rail bed, which is somewhere behind the 7-11 and gas station on Elkin Street. “That’s what I heard when I bought the place,” he said. There’s no sign of any railroad, but while doing yard work, he found a few horseshoes and rusted nails that were big enough to possibly be railroad spikes.

Even the historical expert in the George Washington library has barely a paragraph about the train line, and concludes his research this way: “That pretty much summarizes the file (which is pretty slim!).The train line was in operation until 1932, one source said, but there is a picture of “E.C. Gibbs,” on the last day of the rail service, dated Feb. 28, 1930, so the puzzle continues.”

The Tea House where the trolley stopped was once on the land of George Washington’s Mount Vernon, but some have it as being moved to the Woodland Park area, and is now a blue house that is inhabited. There is a historical plaque on one of the front porch pillars.

Barbara and Jason Malm live next door to the blue house in their own historical house that dates back to that time. They have a picture from 1928, and there is a structure in the backyard that is called the “servants quarters,” on an official land record they located. The Malm’s have restored the quarters, and “we tried to bring it back to the way it was,” said Barbara Malm.

Under a section in the Mount Vernon Libraries documentation called “Refreshments in the 19th Century,” there is a photo of a tea house or restaurant, with a trolley car out front and cars parked on the side that look like 1920’s era cars. One of the photo captions says the trolley started in 1892.

Between Alexandria and the George Washington’s Mount Vernon, there were 25 trolley stops. Glenda Booth who currently leads the Friends of the Dyke Marsh, has investigated the trolley line, and wrote about it in 2012. Apparently there was a house “known as the J. W. Kruettner mansion,” Booth wrote, and it may have been used as the trolley stop at Dyke Marsh. “Some locals have long believed the ruins to be parts of a former rail station,” Booth wrote. It was called the Wellington Villa station, and at that time, “the only parts of the station that have survived are the pillars, now on a house on Northdown Road near the bridge, and the station’s doors, now part of Lyons’s garage.”

As with many historic stories in this time period, bootleggers were involved, and Booth cites a 1978 book by Frederick Tilp called "This Was Potomac River." Tilp talks about “bawdy houses,” in Mount Vernon, and a famous local was a man known as “Cigarette Smith,” who allegedly ran a robust bootlegging operation from a boat, known as an ark, in Dyke Marsh.

“And it recaptures inimitably the human foibles, frailties, and eccentricities that have touched life along its expanses,” a synopsis of the book read.

One community the trolley ran through is Stratford Landing, and rumor has it the trolley ran down Wittington Boulevard, which is one of the straightest streets in the neighborhood.