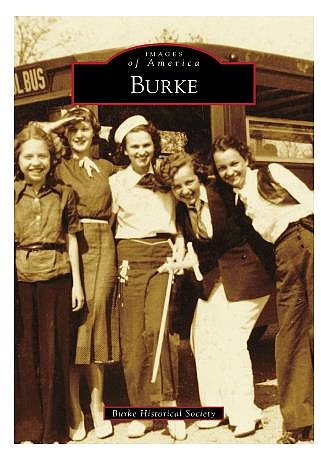 In the 1920s and 1930s, children dressed up as bride and groom at Burke Elementary, and a mock ceremony was conducted in a fun event they 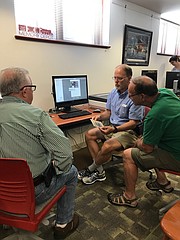 Residents of Burke got together and researched the history.

called “Tom Thumb weddings.” Other students dressed up in suits and dresses, and acted as bridesmaids and groomsmen, and this mock wedding was inspired by the 1863 wedding of General Tom Thumb (Charles Sherwood Stratton) and Lavinia Warren.

Pictures of these events are featured on pages 48-49 of “Images of America: Burke,” a historic book recently put together by the Burke Historical Society that delves into the last 300 years of life around Burke.

The BHS began work on this book in the spring of 2019, and formed a committee who spent days “soliciting, collecting, and scanning photos from members of the community,” at the Virginia Room in the main Fairfax Library, said BHS member Debi DeLoose. Donors brought their photos in and provided some information about them. “The stories they told were the most fascinating,” DeLoose said.

Then the task of putting them in a logical order, and qualifying the photos as “historic,” took place, and then the book was loosely set into chapters.

There is information about two Civil War skirmishes in Burke; the day Burke decided to secede from the Union; slave holders; information about the old race track; and other slices-of-life that are not so famous. DeLoose liked the picture on page 25 of a group of men and boys on the porch of the Marshall Store. Everyone in the picture has a hat on, revealing a timely fashion that isn’t seen much these days.

Some of the pictures were available in the Virginia Room while others were from a private resident’s personal collection. Each had to be credited correctly, and fees were paid by the BHS for some. “We learned a lot of things besides history,” said DeLoose. Copyrights laws came into play in some instances.

“The fun and camaraderie was fantastic,” added Cindy Bennett, one of the BHS members involved with the project. There were 13 people on the Editorial Committee meeting regularly to research, write and edit each other's work. “Everyone was professional, kind, and dedicated to putting out the best possible work,” Bennett added. Fact-checking was a big part of it. “It was a lot of work and we’re all still speaking to each other,” said DeLoose. 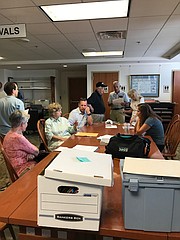 The research was done mostly in the Virginia Room, but many photos were contributed too.

The group came up with 10 chapters, and went chronologically. Chapter titles started with “Burke and the Civil War,” and ended with “Airport and Beyond.” According to DeLoose, “the publisher limited us to no more than 127 pages and no more than ten chapters,” she said. The word limits were a challenge, Bennett said.

Some of Bennett’s research focused on Tom Thumb Weddings that took place at Burke Elementary School, and she discovered that the original Charles and Lavinia met while employed in P.T. Barnum's circus. Their wedding was the subject of a NY Times headline and it resulted in three wedding receptions, “including one hosted by President Abraham Lincoln,” she said. There was a script made from the original wedding, and it was used in later mock ups like the one at Burke Elementary. Sometimes these weddings were used as a fundraiser.

The book was published by Arcadia Publishing, which puts out a series called “Images of America,” which are “penned by local experts.” “Each book in this series weaves the history of a community in stories and rare photos, from its beginnings to today. Every place tells a story...” Arcadia said.

For example, Lynne Garvey-Hodge. a former chairperson of the Fairfax County History Commission, wrote the “Clifton” edition a few years ago, while “McLean,” was written by historian Carole Herrick who "uncovers the history of this former farming village to thriving community in over 200 vintage images," Arcadia said.

“Burke” finally went to press in February 2020, and the book hit the streets this summer. When they got their first box of books, representatives from the BHS took a copy over to Supervisor Pat Herrity (R-Springfield) and he was impressed.

“What a great collection of never before seen photos documenting Burke throughout history and because of this effort there are hundreds more available in the Virginia Room in our library system. The incredible work by the volunteers of the Burke Historical Society is invaluable in preserving our memories and keeping the history of Burke alive,” Herrity said.

To order a copy of the book, there is a link on the Connection Newspapers website, or go to www.arcadiapublishing.com

Historical Events and Oddities in Burke

On May 23, 1861, the residents of Burke’s Station voted on secession from the Union, the vote was 69 in favor and 1 opposed

The vote to secede was at Arundel’s Tavern, which is now a private residence

The Fitzhugh mansion at Ossian Hall was burned on purpose as a fire department training exercise on Sept. 3, 1959

When Lake Braddock Secondary School opened on Sept. 4, 1973, it originally had the open classroom floor plan, popular at that time.

The Copperthite racetrack, in the area of present-day Burke Nursery, was home to harness racing, motorcycle and car races, and baseball games. It operated from 1908-1917.

The first Burke Centre festival was in 1977, and featured pony rides as an attraction.

In 1951, the federal government pushed forward with plans to build an airport in Burke, until the residents spoke out against it, and they ultimately decided on the present-day Dulles site.

Lake Braddock Secondary School’s newspaper, “The Bear Facts,” was the only home- delivered school newspaper when it started in Fairfax County.