Long time owner is retiring but new owner vows to keep it the same. 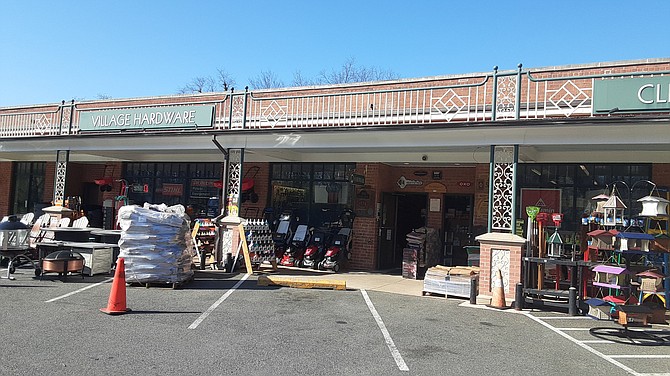 Since 1979, Larry Gray, owner of the Village Hardware in the Hollin Hall Shopping Center, has been the go-to guy for area home projects in that part of Mount Vernon. He recently announced his retirement, and will take off with his wife Janet to their planned retirement in Florida.

“I will truly miss it,” said Gray. “I met my wife here, selling her and her mom a lawn mower,” Gray added.

For years, Gray has been making sure the hardware store stocked the right tools and supplies for the job, and the packed aisles and shelves are testament to his efforts. Area residents know he put this in the forefront of the business plan, and are hoping for more of the same from the new owners.

“You can’t sell off empty shelves, I always listen to customers,” he said.

In 2018 they were named the number one hardware store in Virginia, and in 2020, “my figures were off the charts,” Gray said, possibly attributing 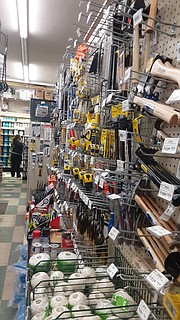 Aisles will remain full of items like it always has been at Village Hardware.

that to people working on projects when they were home under quarantine.

Gerald A. Connell was a frequent shopper at the store and remembered a time when he brought in a part, looking for a replacement, but they helped him fix the part instead at no charge. “It was a golden place that stocked stuff that you could not buy at Lowes or Home Depot,” Connell said.

Jim Seeley was a fan of the store as well, and respected the fact that Gray became such a fixture in the neighborhood. “Over the years Larry made important business decisions that put his store on firm ground with a strong reputation in the Hollin Hall/Waynewood communities where he was always a willing sponsor of little league teams and local non-profits,” Seeley said.

“I have a tremendous customer base,” added Gray.

From behind the register, Kaylin Monnot is getting a crash course in home building, gardening and tools as she runs the register for the store. “It’s hard to keep certain items in store,” she said.

Monnot was hired by Gray over the winter, but with spring coming in fast, she is getting used to it. She lives around the corner so she sees a lot of familiar faces. She likes the fact that the new owners are not planning to overhaul the store. “They’re going to try to keep it the same, as much as possible,” she said.

New manager Troy Richard and clerk Kaylin Monnot look at the details of an order.

The new owners, WEA Inc. out of New England can see the existing formula works, so they are not going to change much, except for the relationship the store has had with “True Value.”

New manager Troy Richard has 30 years of experience with WEA so he knows hardware. “I want to keep that small town feel,” he said. Richard calls WEA, Inc. “a true independent, like [Larry Gray] was.”

The formula that is so popular begins with 12,000 SKU’s which is the buzzword for item numbers that the computer uses to ID products. “We don’t want to limit ourselves to one company, we’ll keep as many of his vendors as we can,” Richard said.

One thing they will change is the methods used in marketing and outreach. “We do a lot of stuff online,” he said.