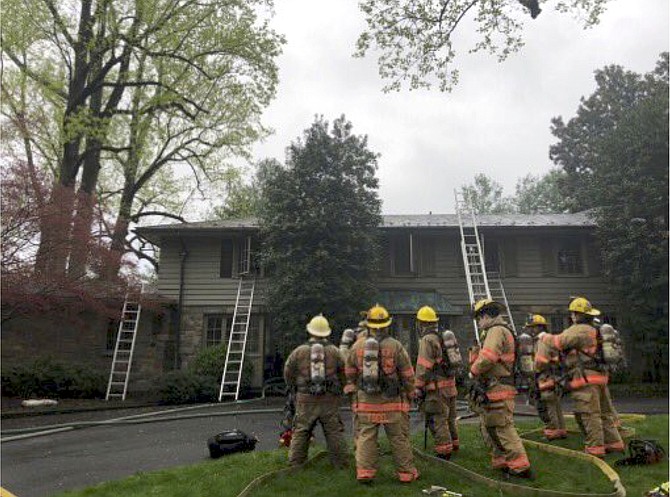 Firefighters were on the scene of one Avenel house fire caused by lightning, when they learned the next-door neighbor’s house was struck, too.

An aerial view of Rapley Preserve Circle in Potomac.

Firefighters were on the scene of a house fire on Rapley Preserve Circle in Potomac when next door neighbors alerted the rescue squad that their home had been hit by lightning, too.

“As units were pulling up on the scene, hooking up to the hydrant, a neighbor came over and said their house was on fire as well. So, two full assignments,” said Pete Piringer, Chief Spokesperson for Montgomery County Fire & Rescue.

“While they were advancing the first attack line into the structure, another engine reported that the neighbor’s house had fire showing from the second floor. The command team made the quick decision to divert some units from the initial box to begin the firefight next door, and requested two full assignments to the same block,” he said.

During the significant thunderstorm Friday, April 9, lightning struck the roofs of the two homes virtually simultaneously, causing fire in the attics and attic walls.

The houses are near the Avenel Swim and Tennis Facility and Avenel Local Park.

THE UNUSUAL STORM caused more than $800,000 in damages in the two houses and displaced both families, according to Pete Piringer, with Montgomery County Fire and Rescue, on twitter.

“A pretty severe isolated storm rolled through here,” he said.

“Investigators believe both fires were sparked by lightning; lightning strike damage was also visible on nearby trees,” according to Piringer.

One firefighter was transported to the hospital for observation, he said.

Lightning currently hits the ground on earth around eight million times per day, according to the Environmental Journal online, but that number is predicted to increase as global warming accelerates.