Results of Arlington and Montgomery County Collaboration on Airplane Noise 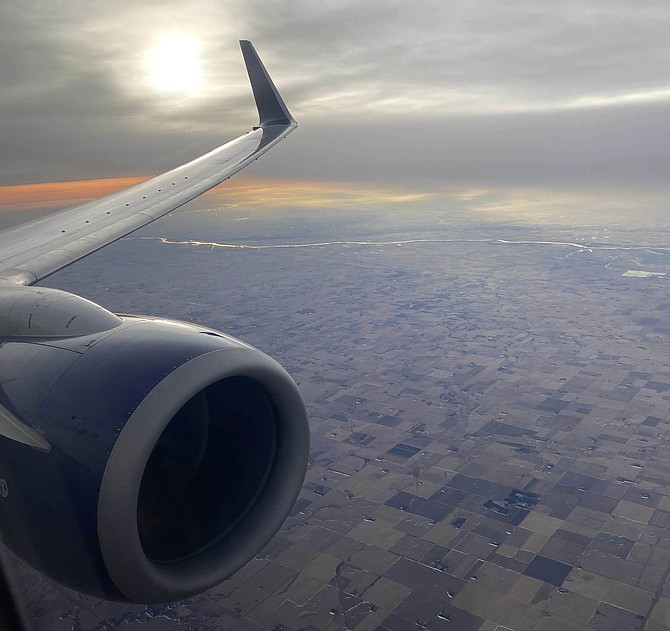 Engine noise from an approaching aircraft can be a disturbance to residents and workers on the ground. (File photo) Photo by Mercia Hobson.

(Click on "Download .PNG" to see large graphic.) Noisiest time of day vs. arrivals and departures at Reagan National Airport as perceived by area residents and workers asked in a questionnaire.

Residents in Arlington, Montgomery County and D.C. have complained of increasing airplane noise from flights approaching and departing from National Airport.

The proposal put forth by consultant ABCx2, hired by Arlington and Montgomery counties, would move the flight tracks over land near the George Bush Center for Intelligence at Langley, located in McLean, Fairfax County.

Garvey said that the purpose of the study and ongoing community engagement was to propose approach designs to be submitted to the DCA Community Working Group and upon approval to the Federal Administration Authority.

Friedson recalled that in 2018, community members and staff realized that to make real progress, they would need the help of a third-party airspace expert, a vendor who fully understood the technical details of designing and implementing airplane flight paths and procedures expertise.

"We would also need to work together with neighboring jurisdictions to come up with solutions that don't just move the noise problem from one community to another, but that best mitigate and balance in the ways across the entire region," Friedson said.

The new and more concentrated flight paths the FAA authorized over the Potomac River on July 30, 2020 concerned study members. In response to an August 2018 request to the FAA from the United States Secret Service, one waypoint moved 784 feet to the southwest, directing aircraft away from protected airspace above the White House and Naval Observatory.

In August of 2020, Arlington and Montgomery counties together launched the $225,000 aircraft noise mitigation study spearheaded by aviation experts ABSx2 based in Atlanta.

Garvey said the evening's focus would be on flight arrivals and the results of the questionnaire issued after the Arlington-Montgomery County Aircraft Noise Mitigation Study meeting on Aug. 17, 2020. "I know we've got additional work to do, and we'll be looking at departure procedures as well another time," she said.

Ken Hartman, Montgomery County representative on the Reagan National Committee Working Group and chair of the North of Airport Committee provided a baseline assessment, the historical perspective. In the 1960s through 2015, aircraft followed the Potomac River; it became the norm. In 2015, with Performance-Based Navigation (PBN), the new technology allowed aircraft and procedures to be more standardized and routine. Hartman said they had an opportunity to sit down in real-time and use mapping software to display procedures and predict noise impacts.

Hartman said. "So, what was, in the past, a wide band of aircraft with a natural level of dispersion became more concentrated."

Rich Roisman, regional transportation planning coordinator in Arlington and appointee to the Reagan National Airport Community Working Group presented the Aug. 17 questionnaire findings. It attracted over 1,600 responses evaluating experiences with aircraft noise. Roughly two-thirds of respondents were from Maryland, one-third from Virginia, and the slight remainder from D.C. Most lived in their homes for ten years or greater.

"The chart indicates that people find things to be very, very disruptive to their daily life, particularly outdoor noise. … Eighty-seven percent have experienced greater noise over the last four to five years," Roisman said. He added that the most disruptive time is 5-8 a.m., with noise from arrivals and departures equally disturbing.

Janelle Wright, an alternative member of the Reagan National Community Working Group spoke about the principles used in reviewing and discussing options for procedures. According to Wright, the group used software with FAA flight standards and criteria "baked in," and aircraft performance also factored. They were able to see in real-time if the improvements contemplated met FAA standards and were flyable for aircraft that use Reagan National. They could also see the noise impacts of any changes.

"This process is about noise mitigation… not about reversion to historical flight paths or the way the FAA used to manage our airspace before 2015. That is just not an option," said Wright. The committee endeavored to place proposed flight paths equal distance between residential areas, not just the Potomac River's center.

James K. Allerdice Jr., of ABCx2, LLC, provided overviews of proposed flight procedures and standard operating procedures that would give noise abatement/mitigation. Allerdice noted as a challenge that the Washington D.C. airspace is within the prohibited airspace surrounding the White House, the National Mall, and the residence of the U.S. Vice President.

Allerdice collaborated with the FAA, NowGEN, and the Design Working Groups, including community representatives. The recommendations would revise two area navigation (RNAV) approaches, moving the flight tracks over more compatible land areas near the George Bush Center for Intelligence at Langley, located in McLean, in Fairfax County, Va. This would more equitably share the noise burden associated with planes approaching DCA with Arlington County and the District of Columbia.

Allerdice said the plan would randomize the paths that the airplanes previously took from Standard Terminal Arrival Routes (STARS). The planes would not fly over the same place all the time, every day.

Following anticipated 190-day positive testing that began March 1, 2021, Allerdice proposes to continue the test model in collaboration with the FAA. "That is the arrival track variability that we are attempting to attain," said Allerdice. Results can be viewed on the NOWGEN-DCA Project website.