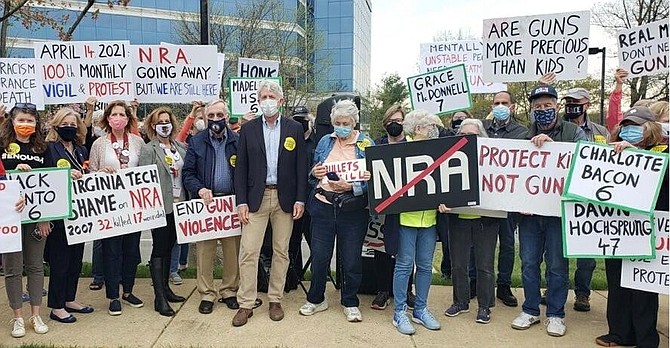 Del. Ken Plum’s post: “Amazing turnout at the 100th monthly vigil and protest at the NRA. Thank you to all who attended. Enough is enough! We will not give up. Time for the US Congress to act!” Photo contributed

While public attention has been focused on the COVID-19 pandemic many missed the epidemic surge in gun violence that has been occurring in this country. In the last month there have been 45 mass shootings in the United States, and that is just counting incidents in which mass shootings are defined as four or more people who are shot, wounded, or killed. By that definition there have been 147 mass shootings already in 2021 compared with 600 in all of 2020 and 417 in 2019. We are on course to set another record for mass carnage involving guns.

Surprised that the numbers on gun violence are so high? Our attention has been transfixed on the COVID crisis that forced some news stories to the back pages, and unfortunately the number of mass murders is becoming so common place that they do not receive the attention they once did. And for every news story on the front page about another mass murder there are dozens of stories buried in later pages of shootings of one, two, or three people including shootings in our community of Reston. I share the concern of many that we are becoming immune to the bad news for it happens so frequently. We cannot let these mass shootings become the norm!

If you were wondering why flags were flown at half-mast in Virginia last Friday, it was to remember the 32 people who were murdered and the 17 wounded at Virginia Tech in 2007. At the time it set a record for the number of persons killed in a mass shooting. It has since been eclipsed by shootings in Las Vegas and Orlando. Sandy Hook had almost as many victims, but we need to remember that they were little children in an elementary school. Eight of the shootings with the highest number of casualties happened within the past ten years.

I term the problem we have with gun violence an epidemic in that it is a problem unique to us among the developed and wealthy countries of the world as opposed to a pandemic that might exist more widely. According to a study by the United Nations, there are 29.7 homicides by firearms per one million people in the United States compared to 1.4 in Australia, 1.9 in Germany, and 5.1 in Canada.

One reason for the number of deaths by guns in the United States is their availability. The United States has more guns than people: 120.5 per 100 people. In comparison, the ratio of guns to people in Canada is 34.7 per 100, France and Germany are both 19.6, and Iraq is 19.4.

It is way past time to take action to end this epidemic. The Virginia General Assembly this year and last passed 20 different common-sense gun safety bills including my bill to require universal background checks for gun transfers that the Governor signed into law. Many of the features of these laws have been incorporated into a bill introduced in the United States Senate by Virginia Senators Tim Kaine and Mark Warner. It comes as close as anything I have seen that will help end this epidemic. Join me in encouraging the Congress to pass it.