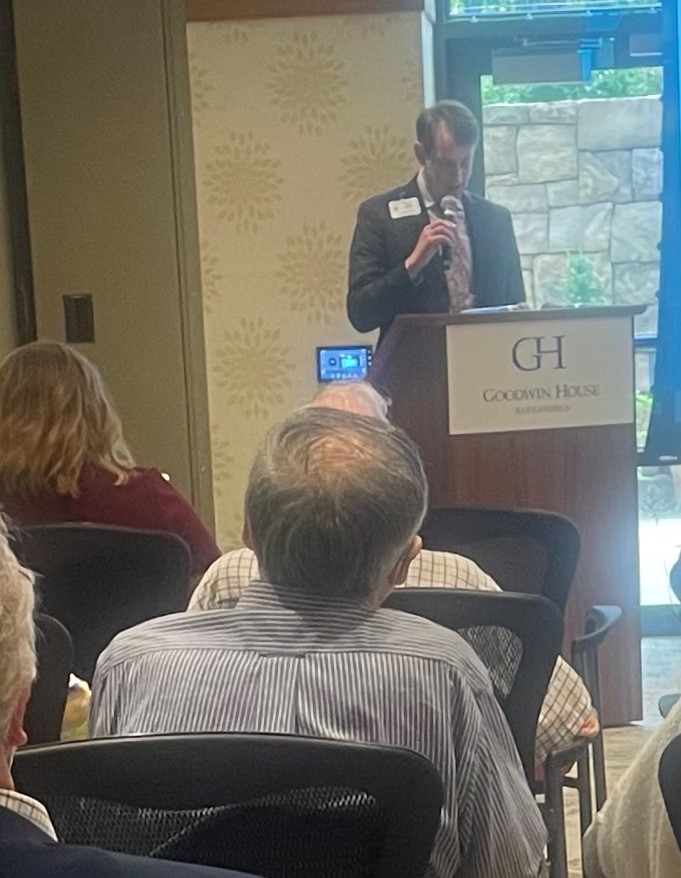 Goodwin House Inc. has partnered with George Mason University to study the impact of the Stronger Memory program on memory, cognition and life satisfaction of participants.

“We are partnered with Mason to research the effectiveness of the Stronger Memory program,” said Jessica Frederickson, the Brain Health program manager for Goodwin House Inc. “I’ve seen it change lives and improve the cognitive memory of patients.”

Sen. Mark Warner made a virtual appearance at the event in support of the Stronger Memory program.

“I want to say a special thank you to all my friends at Goodwin House and their involvement in their Stronger Memory program,” Warner said in a prerecorded video. “We all know someone who has to deal with either dementia or Alzheimer’s. My mom had Alzheimer’s 11 years, so anything we can do to improve cognitive facilities as we age is something I strongly support.”

The Stronger Memory program consists of three basic activities: writing, reading aloud and simple math exercises. The program was started in 2011 by Goodwin House CEO Rob Liebreich, a featured speaker at the event, to help his mother address cognitive decline. Since that time, Stronger Memory has gained a loyal following and yielded positive results.

“I entered the program skeptically but thought I would try it and so far I am impressed,” said Dr. Robert Wallace, a Goodwin House resident and former chairman of Cardiothoracic Surgery at the Mayo Clinic and Georgetown University School of Medicine. “It is difficult to objectively determine if you have improved but subjectively I think it is working and I am going to stick with it.”

“I never felt that I had a strong memory,” Wallace said. “So when the program became available here, I thought that it would be worth trying. It definitely has its merits.””

Stronger Memory is available at no cost and the entire curriculum can be downloaded on Goodwin House’s website at https://www.goodwinhouse.org/stronger-memory/.