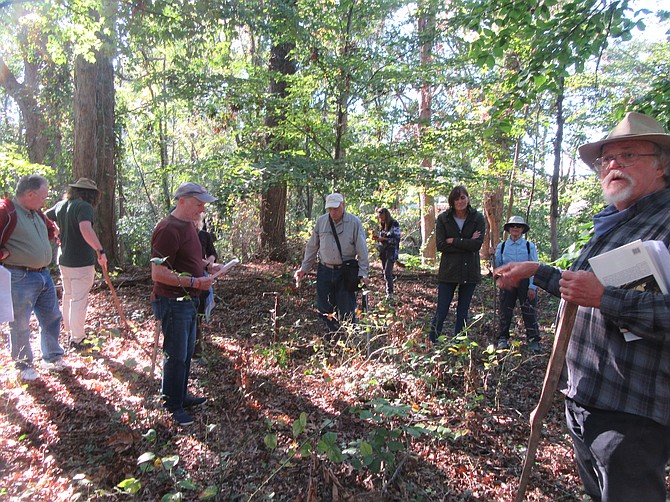 If you peek through the 10-foot-high fence behind Chuck E. Cheese at 6301 Richmond 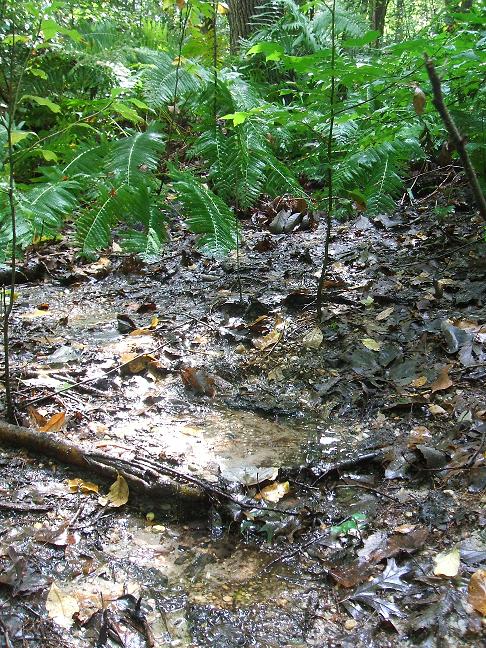 A stream on the land
Highway in the Kings Crossing Shopping Center, you can get a glimpse of the future Fairchild Park. The Fairfax County Board of Supervisors on Dec. 7, conveyed two adjoining properties to the county Park Authority.

An 8.3-acre parcel is bordered by the shopping center and the Penn Daw Mobile Home park on the north side and the Spring Bank community on the south side.

The second piece is a 2.3-acre, connecting parcel with a 6318 Quander Road address.

In 2009, Elizabeth Fairchild dedicated the 8.3-acre parcel to the county for park purposes. In 2017, with Mount Vernon Supervisor Dan Storck’s leadership, the county acquired the adjacent Quander Road acreage.

According to the supervisors’ briefing materials, some parts of the land are within a resource protection area. This is a designation of environmentally sensitive land along or near water bodies that has certain development restrictions. A conservation easement on part of the property will “preserve undisturbed natural features as well as secure water quality benefits,” states the memorandum.

Most of the land is a mature forest of trees, including yellow poplars, American beeches, maples, oaks, black locusts, American hollies and southern magnolias. The stream restoration projects have created new open habitat that will go through ecological succession and thus create more biodiverse habitat.

Tom Blackburn, president of the Audubon Society of Northern Virginia, in a statement to the Board of Supervisors said, “Not only will the new park provide more passive recreational opportunities for people, it will provide and preserve valuable natural habitat in a densely-developed area of the county with significant commercial development, large parking lots and other impervious surfaces and noise and light pollution.” 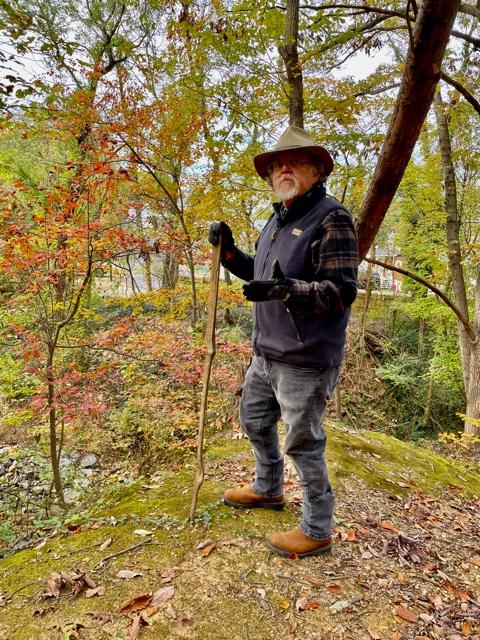 Martin Tillett in the Fairchild, Quander woods on a steep ridge above one of the stream valleys.

In 1809, Robert Patton built a two-story, federal-style, brick house called Spring Bank Manor on the property, a mansion that once dominated the landscape. An 1848 local advertisement described it as “one of the best and most extensive mansions in this part of Virginia." Patton likely chose the name Spring Bank because the land had springs coming from its steep slopes behind the mansion.

In 1844, Patton’s heirs sold the property to George Mason VI, grandson of Gunston Hall’s George Mason, author of the Virginia Declaration of Rights. Fitzhugh Lee, a descendant of Robert E. Lee, rented the home while running for governor. Johnson and Rose Downey eventually owned it and when widowed, Rose sold some of the property to Charles Henry Quander.

Quander, a freed slave from the Hayfield Plantation and a farmer, eventually owned 88 acres. Much of his land eventually was developed as housing subdivisions and West Potomac High School. The Quanders are one of the oldest documented African American families in the U.S.  Quander Road is named for them.

During the Civil War, Union soldiers occupied the house and had several camps in the area. In 1862, the Second Vermont Volunteers named their camp Camp Vermont because when they arrived in a snowstorm, it reminded them of Vermont. The soldiers built log structures with canvas tents as roofs, a mess hall, kitchen facilities and an infirmary.  Area residents have found evidence of Camp Vermont all over, artifacts like buttons, bullets and even a pointed ferrule for a small flag pole.

By the 1950s the mansion was an apartment building. It was demolished in 1972 to make way for a K-Mart at the shopping center.

On the Board’s approval, Storck said, “It has been a long-held community vision to turn the Fairchild property’s former Civil War encampment stream area into a park. I was very proud to have identified County funds to acquire one of the many Quander family properties essential to creating and accessing this beautiful and recently restored stream valley. This land will create connections and pathways for our residents to enjoy.”

Local resident and retired naturalist Martin Tillet has worked for 40 years to preserve the land.  Recalling the stream and springs that sustained the Union soldiers in the 19th century, Tillet said, “When I moved to the Spring Bank community in 1981, that same sloping hillside was now next to a stream brimming with 20th century trash. The polluted and low-quality water was only able to sustain a few species of macroinvertebrate life that was tolerant of the pollution impacting the stream.”

He and his neighbors have conducted water quality monitoring and removed tons of trash from the Fairchild property over the years. With Clean Fairfax, they documented that most of the trash was flowing into the streams from the shopping center parking lot, items like plastic bottles, fast food debris and plastic shopping bags. With Storck’s help, his community convinced shopping center managers to install trash traps on their storm drains. While an improvement, the traps do not catch small debris like cigarette butts and straws.

Over the years, Tillet and others opposed efforts to build single-family homes, townhouses, a golf driving range and vehicle storage lots on the Fairchild property. Instead, the community advocated for a park and for stream restoration and storm water runoff controls from the nearby sprawl of commercial developments and U.S. 1.

“Forty years is certainly a long time but by never giving up and with a clear vision that this stream and landscape were deserving of the same evaluation bestowed on it 159 years earlier by Civil War soldier, George G. Benedict, as a ‘sloping hillside next to a stream of good water’ was true again,” Tillet said.

Tillet envisions the park as “a beautiful, natural resource available as a community nature park for neighbors and for the thousands of new residents that will move into this rapidly urbanizing area.”

The Park Authority will now undertake a master planning process to determine the type of park and development allowed on the property, a process that can take several years.  Visit https://www.fairfaxcounty.gov/parks/planning-development/planning-process.

Storck’s vision extends even beyond this park: “As our redevelopment continues, it is critical that we further support more trails and natural areas. More of this stream bed area is to be restored to the north of this park using stormwater, park and other county funds to connect this stream ecosystem all the way to Great Hunting Creek.”