The Impact of zMOD
Votes

The Impact of zMOD

Discussing the Zoning Ordinance Modernization: How to protect the character of Great Falls? 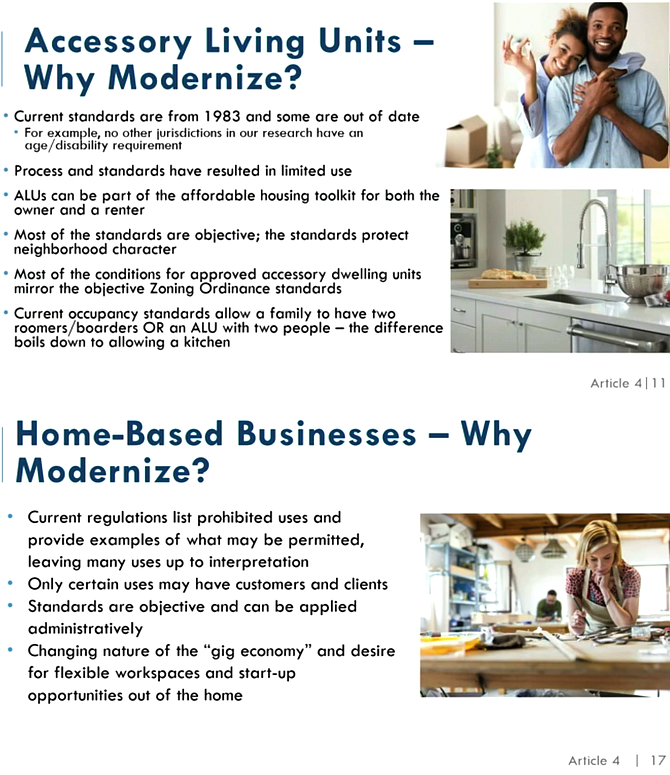 The Fairfax County Board of Supervisors Meeting with action vote is one step away on the zMOD Timeline.

Testimony by 46 County citizens about the Zoning Ordinance Modernization (zMOD) project, started in 2017 and nearing the end of its process, elicited more than five hours of testimony at the Fairfax County Planning Commission Meeting held Jan. 28. The County's Board of Supervisors is scheduled to take action on zMOD on March 9, with the delayed effective date targeted for July 1.

According to the 49-page Executive Summary, the project's goals included modernizing the County's current Zoning Ordinance, its permitted uses, and regulations. Compared to the existing 741-page 1978 Ordinance, the proposed new zoning ordinance is streamlined. It makes the regulations easier for all stakeholders to understand and removes inconsistencies, gaps, and ambiguities. There are more tables, graphs, hyperlinks and the ordinance is available on multiple platforms. Substantive changes to land use are part of the new ordinance. New topics include accessory living units, home-based businesses, accessory structures, food trucks, solar panels, and more.

Canis focused his letter on four areas, beginning with Article 2 – Zoning districts - Residential – Preservation District. According to Canis, GFCA opposed removing the permanent zoning district because that would eliminate a mechanism to preserve open and undeveloped spaces. This would lead to increases in commuter traffic, possible impact on the water table, important given the use of wells in Great Falls, a more significant effect on school capacities and increased threats to the environment.

The second area of concern was Accessory Living Units (ALUs). "While GFCA supports efforts to expand affordable housing and resources for older adults and persons with disabilities in Fairfax County, GFCA objects to this proposal on the basis that elimination of the special permit process would also remove an opportunity for public notice and comment."

The third area focused on home-based businesses and that it should not be amended now. As currently advertised, it would allow an operator to "circumvent prohibitions on signage in a residential area, engage in commercial activity disruptive to a neighborhood's residential character, increase vehicular traffic and create parking problems." Also, the proposal appears, Canis said, "to be unenforceable by the County."

The fourth area recognized that there were no substantive edits proposed to the 2019 Sign Amendment. Canis said that GFCA believes the ordinance lacks "specificity in controlling commercial signage in residential areas."

GFCA urged the Planning Commission to move these items to Phase 2 to allow for further public comment.

In her letter of testimony, Jennifer Falcone, Chair, Great Falls Citizens Association Land Use & Zoning said that she offered her remarks on behalf of the entire Executive Board of the Great Falls Citizens Association. She noted that the zMOD had been described and even lauded by County officials to provide much-needed reformatting, up-to-date rules, flexibility, the elimination for some public hearings, and the ability to accommodate emerging trends.

"The focus on removing ambiguous or confusing language and content has been jeopardized by the inclusion of substantive changes found within the 600 plus pages…That supersedes the scope of the original plan," Falcone said.

Like Canis, she too focused on zoning districts, Accessory Living Units, home-based businesses and signs. "If these changes to the ordinance are adopted…gradually, streets and blocks of residential neighborhoods could transform into commercial zones, with special events and food trucks, especially as we see businesses driven out of their leaseholds across the country as a result of the impact of the COVID-19 pandemic and a growing number of cottage industries emerging."

Falcone urged the commissioners to defer action on the ordinance and direct staff to limit Phase 1 amendments solely to changes addressing readability and formatting. She ended by saying, "GFCA firmly believes that an undertaking of this magnitude is a relatively long-term task and requires much more public examination."