ArPets: “Is He Peeing?”
Votes 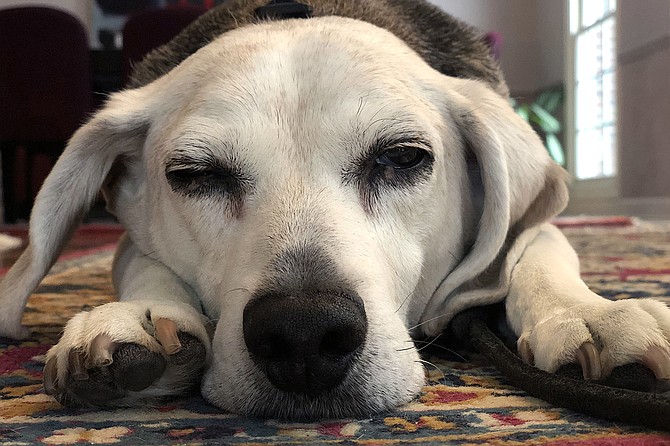 The scene of the most recent crime.

Any position will do.

The tone was matter-of-fact, the implication horrifying.

I'm staying with my in-laws for a bit, helping out as they recover from non-COVID illnesses. It'd been a few weeks and things were going quite smoothly. We have a great relationship and while they aren't necessarily dog people, my in-laws are Hank people for sure. So having our 18-year-old beagle around had not been an issue.

But peeing on the good rug? This would surely put their love of four-legged Hank to the test. And there was no pretending it hadn't happened, since he was still leg-lifted when I raced in from the kitchen. Yup, a full pee on the dining room rug. The now fully relieved Hank quietly returned to his bed, completely unaware that he might have signed his own kennel check-in paperwork.

Hank has Cushing's syndrome, which, among other things, can cause uncontrollable peeing. If you have ever had a urinary tract infection (UTI), I think it's kind of like that – an urgency that simply cannot go unanswered. For Hank, the Cushing's symptoms have been pretty well controlled through medication. I silently begged for this to be an anomaly, rather than an indication that the disease was progressing.

Red faced, I quietly finished sopping up the still-warm urine and happily there was no further mention of the incident.

Having Hank around during this stressful time has been great for the entire household. Hank is in a fairly constant state of relaxation. His bed moves to whatever room we are in and he rotates from his dog bed to the couch to the floor. Watching him resting peacefully, laughing at the disruption of his loud snoring and, when he is awake, succumbing to his relentless begging for table scraps, has had a wonderful effect on everyone.

But since the, ahem, incident, I've been on high alert. Fearful that at any time, I would again hear that cringeworthy question, "Is he peeing?" It had been a few days and I was just starting to think we were in the clear. And when I let my guard down, Hank jumped up on the couch where I have been sleeping at night and lifted his leg, releasing more urine than anyone should have to clean up after a long day.

Think positive thoughts for us, my mother-in-law will be learning of the most recent puddle when she reads this. I'm hopeful that when her glance turns from her computer to the sweetly sleeping Hank, her heart melts at the very joy of him, and she will forgive him his most recent transgression.