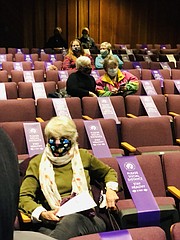 For everyone in the modest audience—48 people in a theatre built for five times that many—the evening was two hours of pure enjoyment.

Finally! 2020 is gone, barely visible in my rearview mirror. Let’s hope the inauguration of Joe Biden and Kamala Harris and the mass vaccination campaign against Covid 19 are only the beginning of a much better year. But I digress. My subject is one of the highlights of the holiday season. The week before Christmas we were fortunate enough to have tickets to a special live performance of traditional Irish music at the Reston Community Center. Imagine an in-person concert during a peak of the Covid 19 pandemic! Actually, the irony is that staging such an event safely is simply a matter of pretty straightforward organization and management.

Lunasa is a remarkable musical group that has been coming to perform in Reston since shortly after its founding 24 years ago. Being one-half Irish myself, I am particularly fond of their music, and Lunasa is renowned for their instrumental Irish music and most delightful jigs. This evening they were accompanied by guest vocalist David King as well as the instrumentalists.

The Lunasa band members were in blue jeans and countryside pub attire. Still, they looked right at home on Center Stage. Kevin Crawford was the leader of the group, the emcee and chief teller of Irish jokes as well as playing the flute and whistles. The rest of the band included Ed Boyd, a prolific composer and guitar player; Cillian Vallely on the Uilleann bagpipes; Trevor Hutchinson, a founding member and double bass player; and, Sean Smyth on the fiddle and whistles. What a fascinating and to mine ear, unusual, combination of instruments and sounds.

We were treated to a lively evening of very Irish jigs and Irish Christmas songs telling their unique Irish tales. Among the tunes was one composed that same day by Mr. Boyd who was near completing a unique mission of musical composition. He set out at the beginning of 2020 to compose one new, original song or tune each and every day for one year. He had no way of knowing that the year he chose would contain substantial Covid 19 pandemic lockdown periods of time which, it turned out, according to him, actually facilitated achieving his goal. He had a lot of extra time available as many gigs and travel plans were cancelled!

Along with our reduced Center Stage audience, Fran and I found ourselves clapping our hands and/or stamping our feet with many of the tunes throughout the evening. For us and it seemed everyone in the modest audience—48 people in a theatre built for five times that many (see photo)--the evening was two hours of pure enjoyment! In fact, we may have felt even more comfortable because of the smaller audience size. We certainly were not shoehorned into our seats as one sometimes feels when the house is packed!

So, how did RCC pull it off and deliver such an enjoyable event while adhering to the requisite precautions and assuring we felt safe?

Everyone was warned to not attend if they felt at all ill or had been exposed to anyone known to have been ill or tested positive for the virus. All wore face masks, had socially distanced assigned seating and maintained social distances throughout the evening. And, RCC staff were present to assure we stayed safe. For me, it was more proof positive that such events and others can be conducted safely if organized and managed competently… as was also the case with the Reston Farmers Market for the full 2020 season. IMHO a modern society with competent governance should in fact be able to conduct operations at many venues …including schools, entertainment and sports arenas, and churches, for example, at safely reduced numbers with effective precautions and oversight.

I think it is unfortunate that we as a county and a country have not yet learned how to do so. To date, we seem to know only the extremes of near total lockdown or foolhardy openness which exposes our people to unacceptably high risk of illness or death. In nearly a year, we don’t seem to have progressed very far along the learning curve. And, don’t even get me started on failed leadership beginning at the top!

Accordingly, I am pleased to give a hardy hat’s off and salute to County Supervisor Walter Alcorn, long-time RCC Executive Director Leila Gordon, and RCC staff for setting a fine example showing what can be done by competent people with a bit of sustained effort.