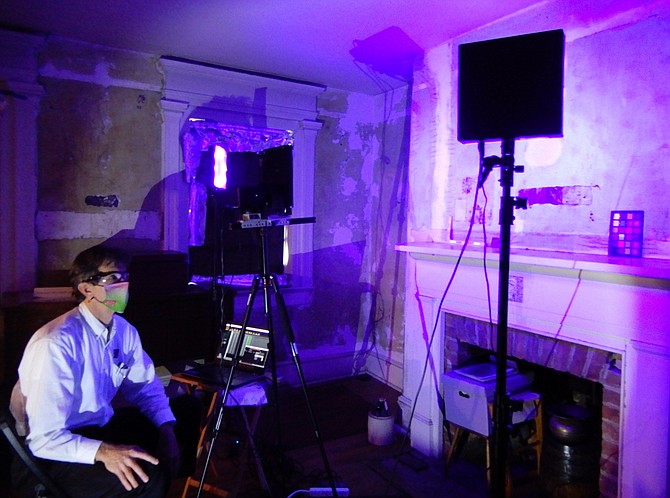 Andrea Loewenwarter points out some of the patriotic Civil War graffiti.

One of Mike Toth’s multispectral images shows graffiti on the wall at the bottom of the stairs. 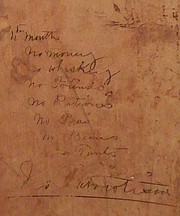 A saddened soldier wrote, “4th Month: No money, no whiskey, no friends, no rations, no peas, no beans, no pants, no patriotism.”

At Fairfax City’s Historic Blenheim, technology is meeting history, and Mike Toth is the modern-day archaeologist making it happen. But he’s not using a pick and shovel – his tools are a camera, a variety of lights and a computer.

Built in 1859, the brick farmhouse contains messages and drawings done by Union soldiers during the Civil War. And by using a technique called multispectral imaging, Toth is literally bringing these images to light so they may be viewed and preserved.

He’s president of Oakton-based R.B. Toth Associates, which uses advanced, digital technology to support cultural-heritage conservation throughout the globe. Yet he discovered something that amazed even him, without going far.

“I normally travel 50,000-100,000 miles/year, around the world,” said Toth. “And here – 5 miles from my home – is probably the most unique, historic site I’ve ever worked in. It’s because of the variety, in that every surface and portion of a surface of a wall is different. And the writing is in charcoal, graphite and sepia-colored waxy crayon.”

His work there is funded by a nearly $20,000 grant Blenheim received from the National Park Service’s National Center for Preservation, Technology and Training. Only 11 projects in nine states were selected for this grant.

Blenheim’s one-year project is building on research Toth began there last year. And ultimately, Blenheim will be a model for the application of digital, noninvasive methods of revealing and preserving historic information on walls already affected by various environmental and manmade events.

“The Scott family was the last descendant of the Willcoxon family, which built the house,” said Loewenwarter. “Barbara and Bill Scott lived here from 1962 until their deaths in 1987, and their descendants lived here until 1997.” The City took ownership of the house in 1999.

“The graffiti was always visible in the attic,” said Loewenwarter. “Then in 2002, the City found a 1964 entry in Barbara’s diary. It was about her retracing an image she thought was a drawing of [Confederate commander John] Mosby. It wasn’t, but it made us wonder what else was on the walls.”

So in 2006, the City hired a wallpaper conservator to remove the wallpaper from the first and second floors. Another specialist removed several layers of paint from the walls to get to the graffiti underneath.

“So all these things are challenges for Mike because there are so many different materials on the wall that affect how visible the graffiti is and the results he gets with his light,” said Loewenwarter. “This is huge for us because we’re a small city, so it’s wonderful to have this grant to further our research and understanding of this site.”

So what is multispectral imaging? “The human eye sees a visible, color spectrum – the colors of the rainbow – but we can’t see the ultraviolet and infrared lights,” explained Toth. “So here, we’re breaking up the spectrum into narrow wavelengths of light to capture a photo of each wavelength. Then each wavelength – especially the ultraviolet and infrared ones – gives us information about what the camera’s seeing.”

In essence, Toth uses his specialized camera to take photos with different colors of light – and at different levels of brightness – to reveal what the naked eye can’t see. For example, he said, “Carbon inks respond best to infrared light.” And he controls the lights and camera via his computer.

His system comprises a 100-megapixel, black-and-white camera; two LED light panels – each emitting 16 different wavelengths; a filter wheel for fluorescent shots; plus computer software that integrates all these elements and drives the system.

“We’re also learning how the walls were preserved in the past,” said Loewenwarter. “And we’re ascertaining from the images what conservation methods are best to use in the future. We want to preserve the walls’ integrity and prevent deterioration.”

She then pointed out some of the visible graffiti. “In modern-day England, there are signs saying, ‘Commit no nuisance,’ which means, ‘Don’t cause trouble or be annoying,’” said Loewenwarter. “And here, at the foot of the stairs, there’s a series of cartoons by someone from the 4th New York Cavalry, Co. C, and the words, ‘Commit no nuisance.’”

“That soldier drew cartoons all along that wall,” she continued. “And at the top of the stairs, on the wall to the left, is what we call our Patriotism Series, where he talks about being patriotic.”

AMONG THE ENTRIES there are the words, “Beginning of the war, very patriotic,” with a drawing of a flag-waving man in civilian clothing. Next is written, “1st month, still patriotic,’ and showing an enlisted man standing at attention. Later that month, he wrote, “Hard bread, hard on patriotism,” and drew a soldier sitting on a box, holding a tin cup and eating.

Loewenwarter believes a second-floor bedroom also contains graffiti and is eager to see what Toth’s images there will yield for interpretation. “It’s like historical archaeology,” she said. “We’re looking through layers of paint and wallpaper to make discoveries.”

“I’m really excited about this because it’s a whole new application of our technology,” said Toth. “We’re using 21st-century technology on a 19th-century house. And it’s supporting scholarship, history and preservation, all rolled into one truly unique project. We’ll have huge amounts of data, and each image will tell a story.”