Amazon Fresh in Springfield Brings Out the Curious
Votes

Amazon Fresh in Springfield Brings Out the Curious 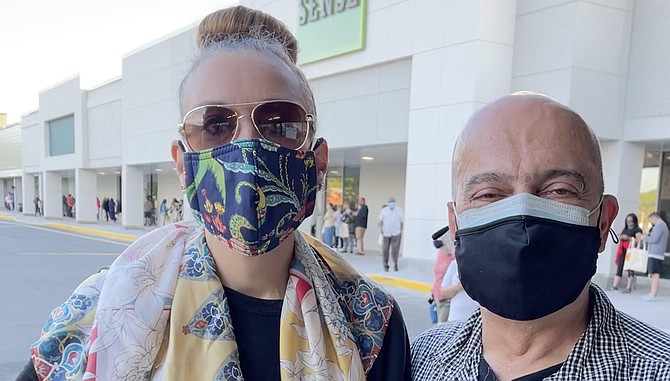 Thomas Kantaras, cyber security specialist, with wife Jan, Franconia, said they were there for “curiosity mostly. To see what they will deliver versus other groceries in the area.” Photo by Susan Laume/The Connection 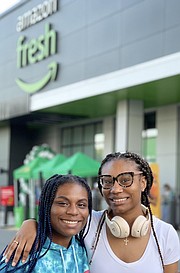 Coming to shop together, sisters Genevia and Khiarah Miles Williams, Springfield, employees at a competing grocery chain, received an Amazon Fresh flier and wanted to “check this place out.” 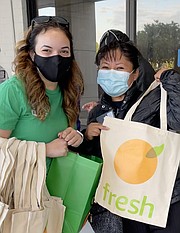 Maria Cruz, customer services rep, Springfield, one of the first 100 customers in line, received a grocery tote and gift card from Amazon employee Cindy Roman. Cruz said she “Wanted to see what things they have.” 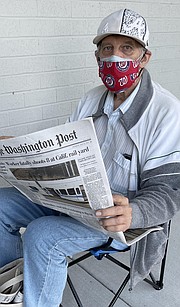 Mark Eastwood, retired, Springfield, arrived well before opening and was prepared for a wait. He shared “…miss the Shoppers Food Warehouse; hope they have good muffins as Shoppers did.”

Amazon opened one of just a handful of its “Fresh” grocery stores on the East Coast in Franconia at 7 a.m. on May 27, to a line of Springfield customers curious about products on offer. The line at opening stretched the length of the shopping center which had formerly housed a Shoppers Food Warehouse.

Trade analysts have described Amazon’s Fresh Grocery Stores as traditional food stores, with a few high tech elements, such as smart carts, which allow shoppers to bag products into the cart and avoid the checkout line; and display cases that light as shoppers approach. The stores also provide an area for Amazon Prime customers to pick up and return packages. Insiders say to expect “Fresh” pricing aimed to the mid-point; with lower prices than Amazon-owned Whole Foods and higher than discounter stores such as Aldi and Walmart or other moderates such as Lidl, recently opened in the area.

The Franconia store is one of four currently announced for the Eastern U.S.; the others: Logan Circle D.C., Chevy Chase, Md. and Warrington, Penn. The first “Fresh” opened in Los Angeles in September 2020. Since then a few more have opened in Southern CA and the Chicago suburbs. Rumors suggest a store may be coming to the “Liberty” development in Lorton, but no announcement has been made by Amazon to date.