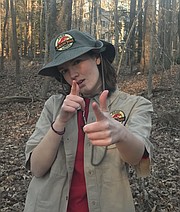 In a time where live theatre is just as rare as seeing a velociraptor roaming about, creativity and inspiration can be scarce, but not for Robinson Secondary School. Their production of Life Finds a Way was a fresh take on a world we know and love, Jurassic Park, and how it is relevant in 2021.

The structure of the play differed from the traditional act by act format in that they made it in two parts. In the first part, the CEO of Jurassic Park addressed the investors' board of InGen with an update on the reopening of the park after the escape of countless dinosaurs caused it to close for two months. The second section was from the perspective of a low-level employee at the park running an unofficial TikTok account for the park.

Despite how short this production was, it was incredibly detail-oriented. Part one was satirical, and humorously compared reopening Jurassic Park with reopening the U.S. during the COVID-19 pandemic, while the second half showed the reality of the situation in the park. There was a brilliant contrast between the rich CEO who only cared about money and success and the sacrificed employee who needed the job to live but could care less about the park's reputation.

The performance started out with the CEO of the park, Dianna Soerre (Abigail Camp), who was all consumed with impressing the investors and making money, despite safety concerns with opening the park. Her character build-up was entertaining to watch because of her lack of empathy and unbothered attitude. Camp's physicality and the way she kept a straight face while there were constant velociraptor roars in the background elevated the satire.

In the second half of Life Finds a Way, the point of view switches to an employee at Jurassic Park and wrangler of the dinosaurs, Tracy Cerato (Katherine "KP" Porter), who seemed to be oblivious of most things around her. One of the best parts of this innovative story was the use of TikTok and all its classic features like comments and the green screen effect, which was a welcome addition to the prerecorded storytelling. Porter used these features to her advantage, even though no one attended her live stream.

The set team (Brooke Hanser, Harry Glicklin, Katherine "KP" Porter) created different settings like Costco, the woods, and virtual backgrounds, which added an interesting touch and kept the video engaging. The editing throughout, from the clever camera cutoffs to the intro card for the InGen investor meeting, made for a simple but elevated final product. Also, the sound effects (Beau Baldassari) created velociraptor roars and gunshots that were placed perfectly and helped with the comedic timing.

Even though there was a small cast, this show had the same energy and humor, if not more, of a large show. The challenges of virtual theatre are ever present, but not as far as the dinosaur wranglers are concerned. Be sure to visit Jurassic Park in the middle of a deadly pandemic and remember that "keeping visitors safe is their number one priority!"

Life Finds a Way can be found in 2 episodes at: