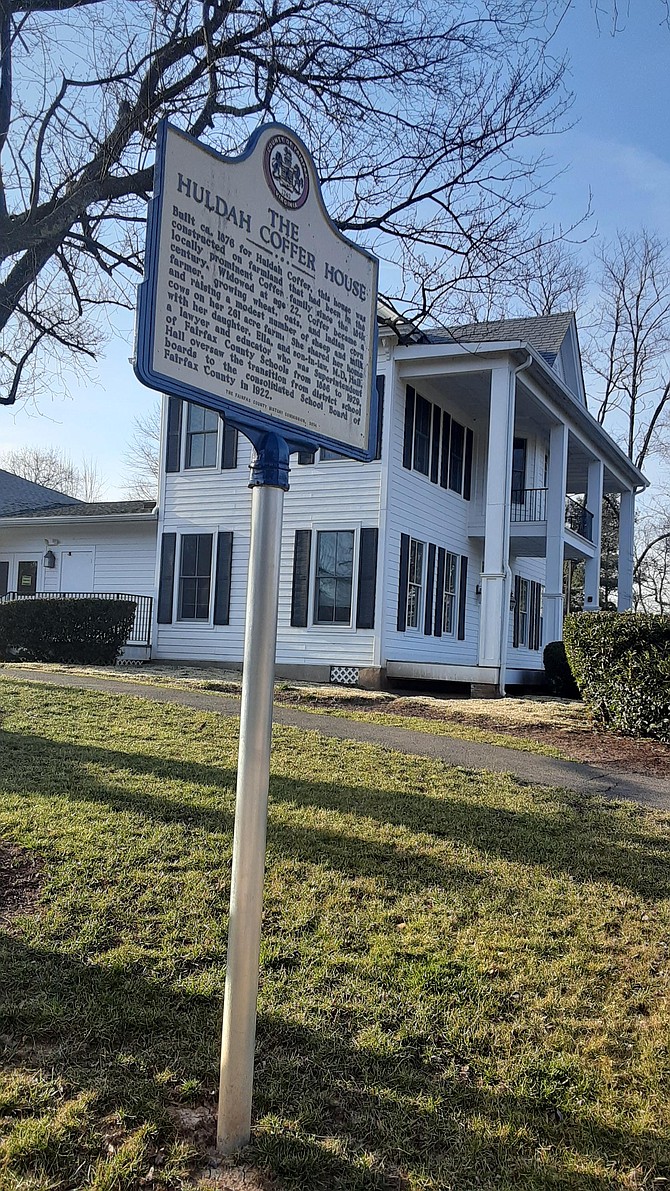 In the Woods community of Burke Centre, the Coffer family cemetery contains several of the younger Coffer family graves from the time around 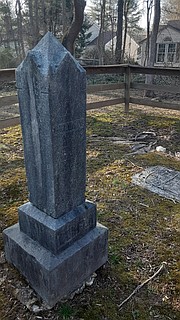 the Civil War, but local historian Corazon Sandoval Foley believes there are more graves outside the fence. According to her research, the graves of Captain Thomas Coffer and his younger brother Ensign Francis Coffer IV, both War of 1812 veterans, are there in a sparsely wooded section between the cemetery fence and the playground.

The 15x15 foot fence surrounds the graves of Joshua Coffer, born in 1814 and died in 1862; Hulda V. Coffer, 1840-1905; and Joshua Coffer Jr., 1862-1881. These Coffers were here during the Civil War times, and that puts their father in the timeframe of the War of 1812, but there are no signs of his grave. Foley has done a lot of research, and found that Joshua Coffer was in the Civil War. “He died in a Confederate prison in Richmond,” she said.

There was an African-American family involved too by the name of the Roots, and Foley initially got involved in the cemetery investigation when Mary Goins Roots told her all about the family connection. Roots was 70 years old when they started looking into it, her ancestors were part of the Coffer family, Foley said.

In the early 1990s, when Roots was still alive, she gathered information and approached Fairfax County with this issue but it didn't go far because there was no record of these burials. Roots was a resident of Burke, and her Great-Great-Grandfather, Charles T. Pearson was a slave owned by Francis Coffer in the early to mid-1880s. He was freed before the Civil War and owned a farm in the area too, according to Foley’s research.

Foley talked to Roots before she died in 1997 while working with the Burke/West Springfield Senior Center Without Walls, and made honoring that family part of her cemetery investigation. “I’m working with her family,” Foley said, referring to the Root family.

Foley’s research at the county library dug up some history about the cemetery. "A 1969 survey conducted by the Pioneer America Society's Tony Wrenn described a 54'x 60' fence surrounding three graves with head and footstones. Thick undergrowth hid any additional burials. By 1998 the gravestone of HULDAH COFFER (1840-1903) was surrounded by a 15'x15' wooden fence," the library documentation stated. The size of the cemetery varied widely, according to this. Although there are gravestones and markers in the existing cemetery, the county website states "The gravestones of JOSHUA COFFER (1814-1862) and JOSHUA COFFER, JR. (1862-1881) are being stored by the Burke Center Conservancy," which may have been true at that time but now, there are currently two crumbled headstones embedded in the ground at the cemetery.

There was an Ella Coffer-Hall in the family too, but “she killed herself by lying on the railroad tracks in Burke,” said Foley.

Foley hired an archeologist to take a look at it, and he noticed some things by looking at aerial photos of the site although he did not visit in person. “I also suspect there might be burials beyond the existing fence. I think the modern parcel lines were placed where they are because that's where that earlier, larger fence was when it was subdivided. Looking at the aerials, I don't think there are burials as far west as the slide, but again, this is all just from looking at it and not actually doing any of the research or testing,” wrote Benjamin Skolnik, an archeologist in Alexandria.

The Burke Conservancy is aware of Foley’s theory but has no information to confirm that this is the case. "We would welcome any information that confirms the boundary of the cemetery and/or the presence and location of any additional gravesites beyond those currently marked," said Jeannie Winslow, the Director of Administration at the Burke Centre Conservancy. The Burke Historical Society had a similar response. “The Burke Historical Society has no evidence to suggest that there are graves located outside the current cemetery fencing, or that Captain Thomas Coffer, War of 1812, is buried in that cemetery,” they wrote.

Whether Foley’s investigations and outreach efforts will ever result in finding any of the other graves still remains to be seen, but she has documented everything in a book she recently published called “More Burke Vignettes, 1728 – 2020: In Honor of Good Neighbors.” The book “aims to honor those Burke residents who did the right thing by the American ideal of human equality and good neighborliness. The Hopkins, Sheads, Curtis, Latney and Goins practiced kind neighborliness regardless of color — while the black community helped each other during segregation when Fairfax County was oppressing them, particularly in denying equal education,” her description read.