Hold off planting young trees or watch them carefully. 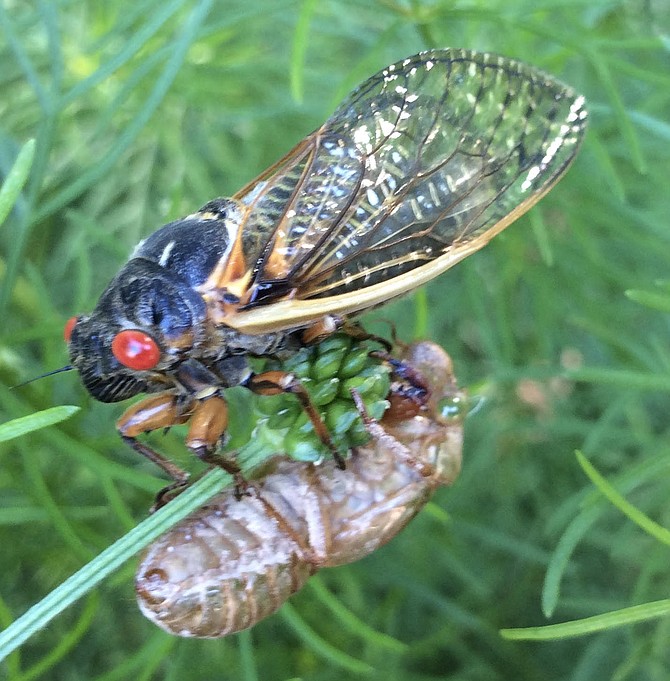 With characteristic red eyes, a Brood X cicada exits from its exoskeleton, moving from nymph to adult stage. Photo by Susan Laume/The Connection

There’s a buzz going around in the tree-loving circles, pun intended, that the emergence of cicadas could be an issue for trees, especially recently planted young saplings. Natural Resources Manager for Arlington County Parks, Alonso Abugattas, has provided some guidance that was sent out to Tree Stewards of Arlington and Alexandria last week: “The egg laying inside these slender twigs causes many to die off. They often wilt and hang down, while others may break off. The wilted and hanging branches are referred to as flagging. Cicadas are picky as to which tree (they don't disturb plants or ferns) they choose to insert their eggs in. They are usually six feet or more tall, mostly at the edge of mature woods, where there's some sun, and usually have pencil-sized stems to oviposit in. They tend to avoid lawn areas with small shrubs unless they're near mature woods. For those people who were around the last time cicadas emerged, they normally use the same places to lay eggs again. They don't like to use evergreens, sumacs, pawpaws, many viburnums, euonymus, or Osage orange. Studies have shown that healthy trees don't show long-term ill effects. Think of it as natural pruning that has been going on for millennia. If you do want to be cautious, leave your tree planting until the fall. Or, protect your trees with 1.0 cm netting, but beware that this may trap birds and snakes. One thing that did not help was the use of pesticides. Studies have shown that this did not make a difference in egg laying. The young nymphs hatch out after 6-10 weeks and burrow underground to feed on tree roots for 17 years.”

Nora Palmatier of Tree Stewards also notes, “A lot depends on how many bugs were in your yard 17 years ago as they emerge generally in the same areas. My yard hardly had any but I did put the netting around some young trees I'd planted – never noticed more than a few in the yard and none on any plants. It also depends on whether you'll be around when they emerge in April – May so that if there were a bunch on your saplings, you could hose them off. The Tree Canopy Fund is going to keep planting anyway.”

The fall is another good time to plant if you can wait.