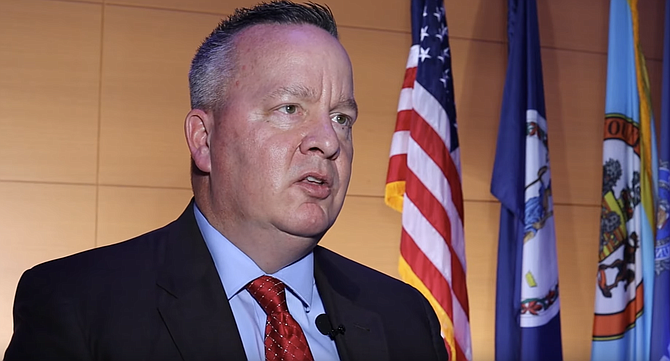 Kevin Davis assumed the office of Chief of Police, Fairfax County on May 3, 2021. Screenshot via FCPD video

County To Hold “Community Meeting with Chief” Thursday, May 6, 7 p.m. To participate, call 703-324-1020; Email to sign up to speak: clerktotheBOS@fairfaxcounty.gov

On May 3, Kevin Davis assumed the office of Chief of Police, Fairfax County. In the video, Meet Kevin Davis - YouTube, https://youtu.be/VocI1zINpBs, released that day by FCPD, Davis said it had been a long journey for him in policing from 1992 through 2018. "I've learned a lot. I've grown a lot…I have a far different mindset today than I did in 1992," he said.

He might have some distance to go, as multiple advocacy groups, including the Fairfax NAACP, have called for a new search for police chief.

According to Davis, policing is in crisis; it is under the microscope, and he doesn't want to sit on the sidelines. He said having been a part of major reform efforts in a "couple of jurisdictions," he knows why reform is needed and how to implement it. "I know how to change behaviors that detract from our relationship with the community. And I think 2021 is the perfect opportunity for me to return to what I love," Davis said.

DAVIS said in the video that as he introduces himself to the men and women in the police department, they are not just going to see him occasionally nor as a "virtual police chief." Davis will back up the police officers. He will be with them on the streets, scenes, and all critical incidents in the county.

ACLU People Power Fairfax demanded community involvement in the vetting process, saying, "The closed-door deliberations by the Board of Supervisors that led to Kevin Davis' selection, coupled with the Board's failure to address his excessive use of force against a Black man in 1993 and serious misconduct six years later, render the selection process fatally flawed." They have since identified other areas of concern.

Diane Burkley Alejandro, Lead Advocate for ACLU People Power Fairfax stated in the Press Release that Davis has two strikes against him. "The third strike belongs to the Board. Most of us believe in redemption, but the necessary precursors — public disclosure of the incidents at the time the selection was announced, acknowledgement that the conduct was wrong and a Board explanation of why Mr. Davis is still the best candidate — did not take place," she said.

ACCORDING TO ACLU People Power Fairfax, it cannot accept the Board's word that Davis is the best candidate without adequate disclosure.

"A public forum involving Mr. Davis would be welcome but is not sufficient. Community trust has plummeted and a cloud of mistrust is gathering over both the Board of Supervisors and the Fairfax County Police Department," stated the release.

For additional information about ACLU People Power Fairfax, a grassroots organization that advocates for equal justice for all community members, including undocumented immigrants, regardless of race or ethnicity, visit Twitter @PeoplePowerFfx and Facebook @peoplepowerffx or by email at aclupeoplepowerfairfax@gmail.com.