NOVA Parks and Northern Virginia Conservation Trust hope to purchase River Farm to keep it open to the public. 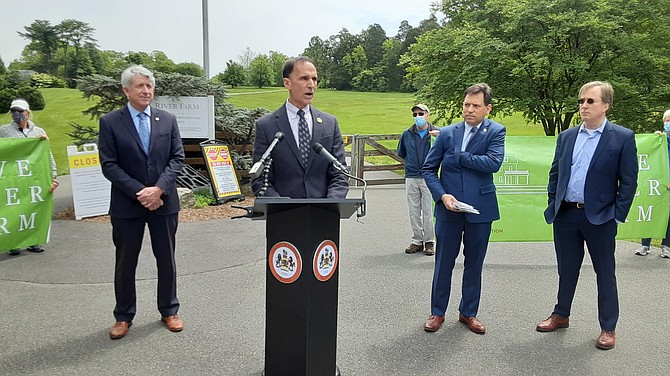 Supporters to protect River Farm gathered around the gate of the property on May 12 to reiterate the desire to preserve the historic property, citing 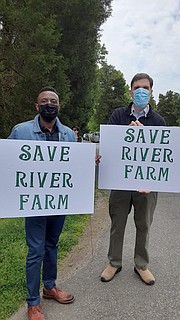 the intentions of the original donor, the current laws, and recent accomplishments on the national, state and local level to preserve it as an open space, open to the public.

“We definitely are for a positive resolve, we don’t want it to be sold to a developer,” said Aaron Kershaw, a representative from the Northern Virginia Conservation Trust, who held his homemade sign alongside fellow conservation trust representative Greg Meyer. They were among a crowd of about 50 people at the gate who had fond memories of the farm, including nearby residents Neal and Soraya Bambha. “When our kids were little, we took them to programs at the farm,” said Soraya Bambha. “Our daughter learned to garden there, she has fond memories,” she said.

Stating their support for the farm were Virginia Attorney General Mark Herring, Supervisor Dan Storck (D-Mount Vernon), Sen. Scott Surovell (D-36) and Del. Paul Krizek (D-44). Each had a turn at the podium, but there didn’t seem to be an inkling of compromise with the current owner, the American Horticultural Society, who have been there since 1973, after purchasing the property with a donation from a donor who specified the property must remain open to the public.

Herring looked at the terms the donor put forth years ago, and noted that the AHS should “honor the intention of the donor,” he said. Surovell looked at the efforts from the various levels of government. “The collaboration between the federal, state and local governments sends a signal that they just can’t do anything they want with this property,” he said.

The American Horticultural Society is made up of individuals from all over the area.

“The [American Horticultural Society] board doesn’t seem to understand that we have laws in this state that pertain to them,” Surovell said.

Krizek called the property a “jewel,” and noted that they “don’t want to see paradise paved over,” he said.

In August 2020, in the middle of the pandemic, the AHS announced their intent to sell the property on the open real estate market. The price was reportedly somewhere around $60 million. But that number has been in question. In the latest talks, they were offered between $14-16 million, said Allen Rowsome, Northern Virginia Conservation Trust executive director, which he called “a good, generous offer,” but the situation still remains deadlocked.

Farm supporters were out in numbers.

On the AHS website, there is a class schedule, information about the features of the farm, history, gardening, and a link to the latest copy of "The American Gardener," but it takes some digging to find any mention of the sale. On their release, they state their latest reaction to an offer made in March. "The American Horticultural Society board of directors has voted to decline a proposal submitted by NOVA Parks, the Northern Virginia Conservation Trust, and their partners to purchase an option to acquire AHS’s headquarters property, River Farm, on the banks of the Potomac River," it read.

Surovell tweeted after: “The @AHS_Gardening Board meets on Friday. The community, 2 Attorneys General & three governments wait to see if they do the right thing and start working with @NOVA_Parks to @SaveRiverFarm — the clock is ticking.”

Colonial Days at the Farm

The 25-acre River Farm has a long history, starting with Giles Brent Jr., and his wife, a princess of the Piscataway tribe, who owned it in 1653 or 1654, the listing states. Then George Washington bought it and made it part of his plantation. Malcolm Matheson bought the property in 1919 and remodeled the home, and in 1973, American Horticultural Society (AHS) board member and philanthropist Enid Annenberg Haupt provided funds for the AHS to purchase the property, the listing states.