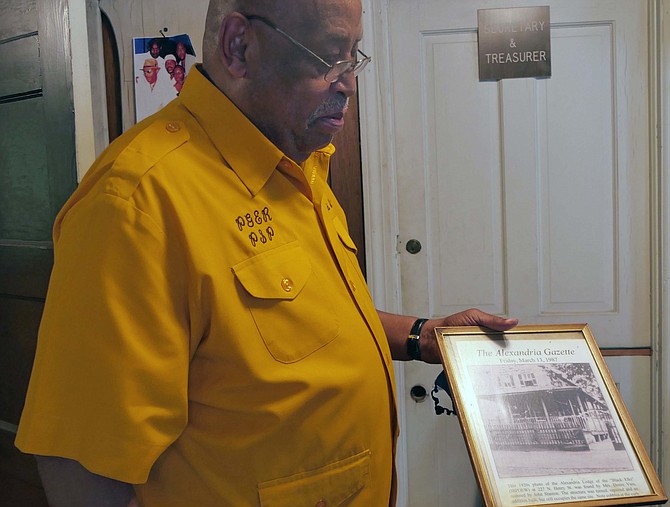 Harold Hughes illustrates one of the historical pictures of the Lodge; this one appeared in the Alexandria Gazette in 1987.

COVID hit. Water poured in through cracks in the roof. Membership dropped. The property plat is missing. But the desire and initiative of Elks Lodge 48 on N. Henry Street to restore their historic building only grows in intensity. 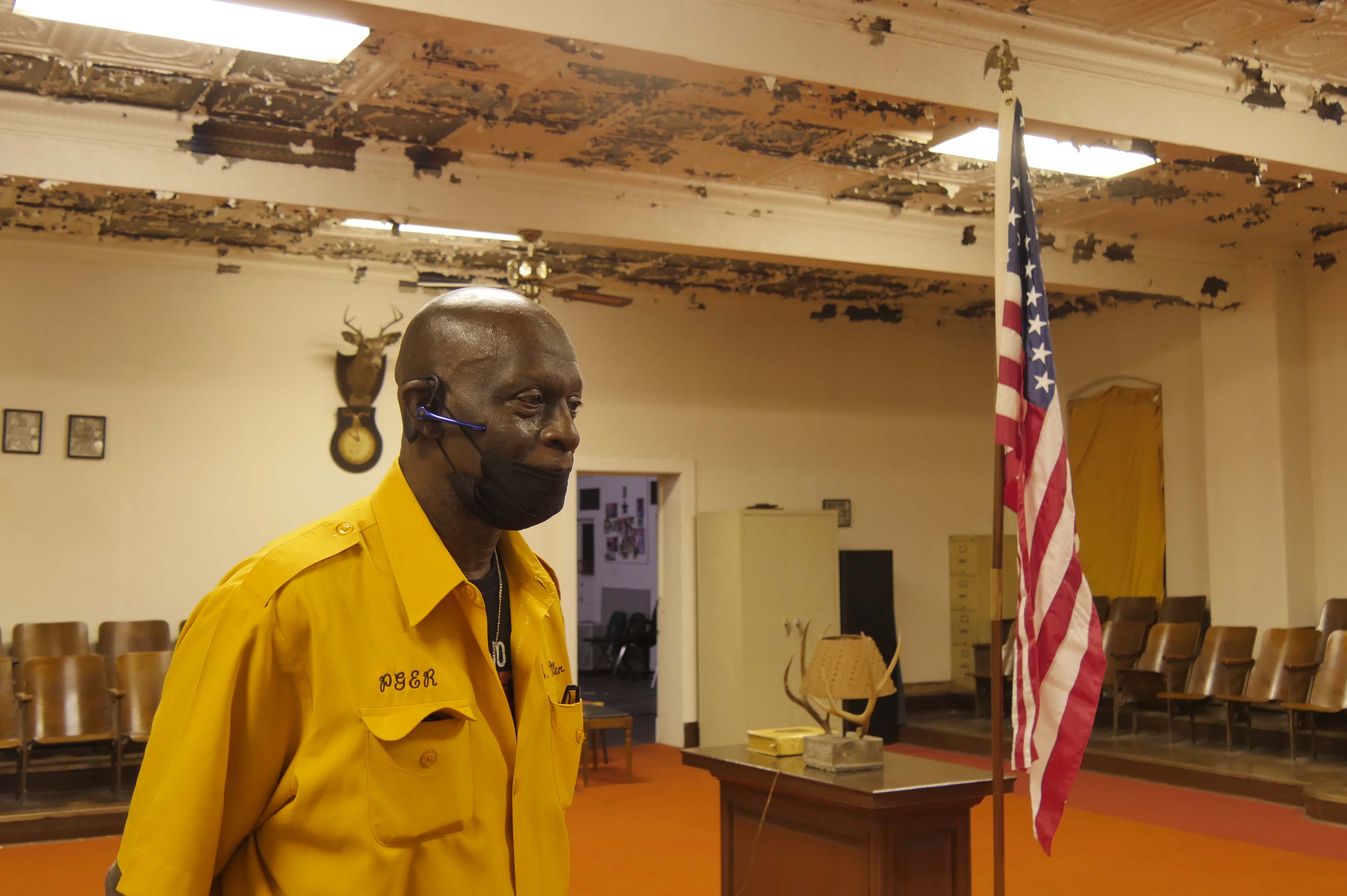 Arthur Miller stands in the Elks Lodge Room, the only Lodge in Elkdom (anywhere), with a specific Lodge Room just set up for meetings.

The Lodge got their long sought-after historic designation in May 2020. A $10,000 grant from The Historic Alexandria Foundation allowed them to do some roof repair, plastering, fixing the collapsed chimney flue and installing new floors and toilets in the bathrooms. They were able to stretch the funds with donation of sinks, hiring a plumber with a low rate and a lot of work by Elks brother Arthur Miller and other volunteers. When Miller wasn’t plastering walls, he was installing toilets and patching the concrete over and over as leaks sprung up in a number of spots all over the building. And “Tom Fannon gave us a new water heater and put it in—that was a real miracle.”

But there are so many things to do that it’s difficult to know where to begin. They have basically plugged the holes in the dike — redirected the water in the alley thanks to the City, and repaired the leaks in the roof because they couldn’t afford a $30,000 roof replacement. “Amen” interjects Harold Hughes, Exalted Ruler of Lodge 48. Now as the Lodge looks forward, they think about triaging the most urgent need “which is definitely the basement where the skeletal kitchen is located.”

The Lodge discovered a couple of years ago their long-utilized kitchen stove didn’t meet code and would require an expensive renovation including three flame retardant hoods. Since then they have been stymied in efforts to move forward by lack of a working kitchen. Carol Black, board member of the Historical Alexandria Resource Commission and volunteer construction manager, says the kitchen is the linchpin of the renovation.

The Elks have traditionally held a community Thanksgiving event for hundreds of people in their community room for almost 40 years as well as an event for their adoptive family at Christmas. Recently they have had to move Thanksgiving to a community center and to make food at home and bring it to the Lodge for the Christmas celebration. In addition, fundraising activities usually involve food, which brings them back to the need for a working kitchen. “We need a bottom of the floor to top of the ceiling renovation—prayer with a little hope,” Hughes says.

Hughes says the goal is to be able to increase membership so they have the resources to fulfill their mission to serve the community, youth and education. Hughes says the Lodge was established in 1904 with 18 members. Membership grew over time until it topped out at several hundred brothers and several hundred daughters after World War II when soldiers started coming back home. Now it has fallen to 27 brothers and 27 daughters, down from 42 of each in 2019 before COVID took its toll. Hughes says the organization is too top heavy as older members die off and younger folks aren’t interested in joining. 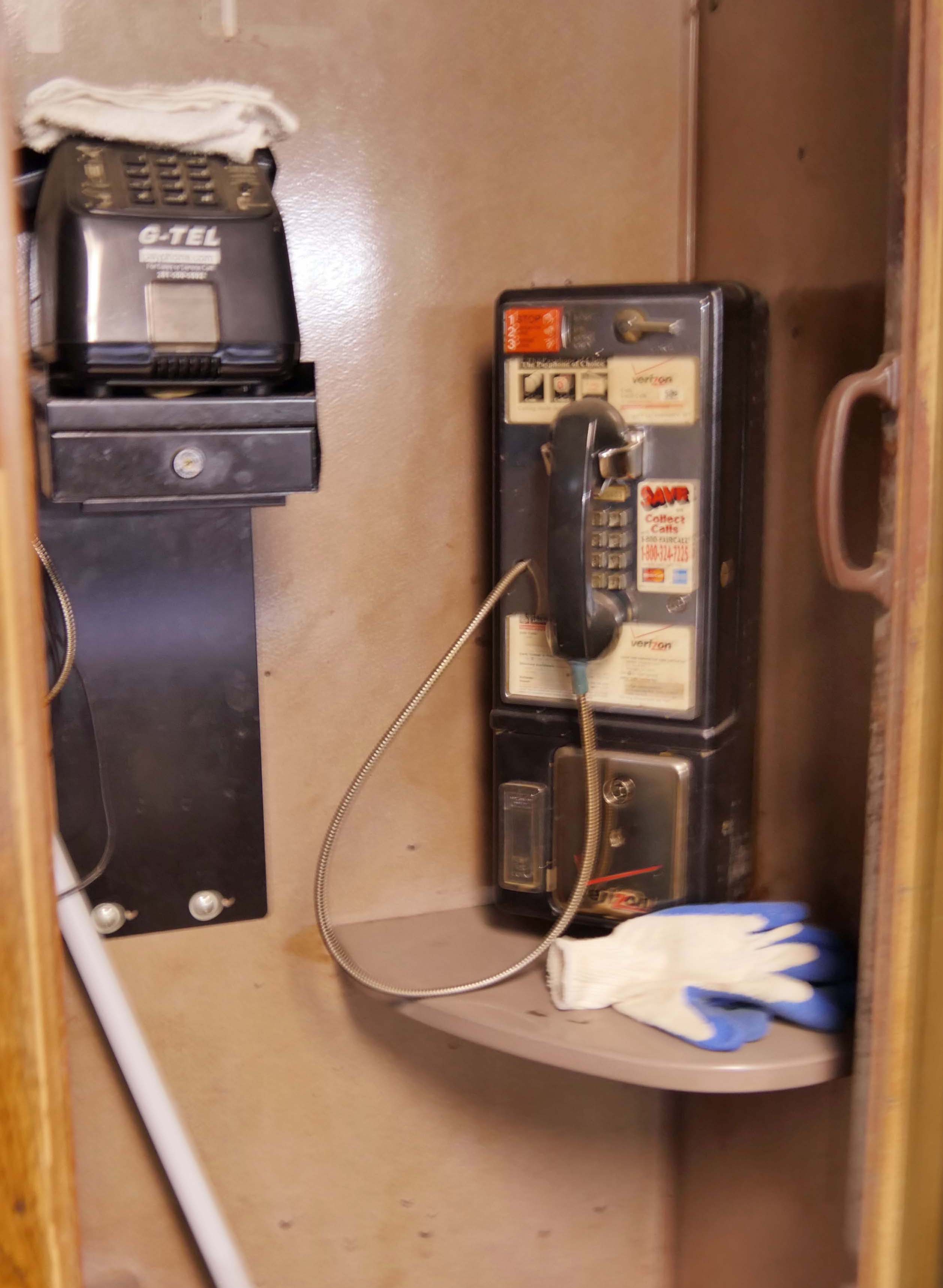 The Members’ lounge downstairs still has a telephone booth and a jukebox, reminders of former years.

WALK IN the front door, and the walls hold the secrets of Alexandria’s history. The newly painted gentlemen’s lounge is on the left and the ladies lounge on the right. Hughes explains that members of the community recently volunteered to fix up some of the rooms. Rodney Grimes and his wife volunteered to help fix up the gentlemen’s lounge, which had just been painted in the Elk Lodge colors of purple and gold.

Miller heads into the lodge room normally open only to members. A stuffed Elk head is mounted on the side of the room and an American flag sits ready for the meetings. Hughes says, “This is the only Lodge in Elkdom (anywhere) that has its own specific Lodge Room just set up for meetings.” He explains a number of the Elks Lodges were established in houses and didn’t have the space for meeting rooms.

The large room has been cleaned of truckloads of former member detritus, and the ceiling has been patched from recent severe water damage. But the restoration of the tin ceiling remains untouched. Black explains that it is difficult to get the paint off the bronze wash on the patterned tin squares to restore the ceiling. They have had three different estimates so far and “we’ve done a lot of research.” But they want to be careful.

Hughes walks into an adjoining newly painted room, which has had the interior walls removed, and carpet taken up. It is now rented out to a group for weekly music practice to raise funds for the Elks renovation. The music group did all of the work themselves. “This room was originally for dances and entertainment for Black soldiers who couldn’t get in anywhere else in segregationist Alexandria.” In its time the Lodge hosted name entertainers such as James Brown and Ray Charles. Close your eyes and you can still hear “Unchain my Heart” reverberate off the walls.

Black says it’s interesting that the room was used for music then and has come round to music again. There is a lot of history within the walls of this building. The members lounge downstairs has a telephone booth in the corner by the pool tables and a jukebox along the wall. Behind the bar are historical pictures of Elks community events dating from the early 1900s.

The Lodge has been resourceful in raising funds by rental of their space. The Pure Heart Global Ministries church utilizes the large community room upstairs for Sunday services. The church painted the room themselves as well as the radiators and installed white curtains.  Hughes says on Sunday the church replaces the usual round tables and chairs with rows of red covered chairs and a red banner running up the aisle on the floor. Black says, “The preservationist in me would like to see those windows on the walls uncovered.” She says a woman told her recently that in former years when the Elks had a music program, the little girls would pull up a crate outside the window in the alley and listen in.

So far in the last couple of years there has been a lot of help from the community, the City that has assisted with the installation of a curb and the neighbors who have cleaned up the alley and dilapidated fences. Black says it was a win for everyone. But there is a long way to go. Black is currently planning to apply for a National Trust for Historic Preservation grant “but it takes a lot of work. They want to know their funds will be well spent.” No one knows how long it could take to restore and preserve this building but it has a piece of Alexandria history within its walls.