Alexandria created the job of city manager 100 years ago in the midst of a crisis. 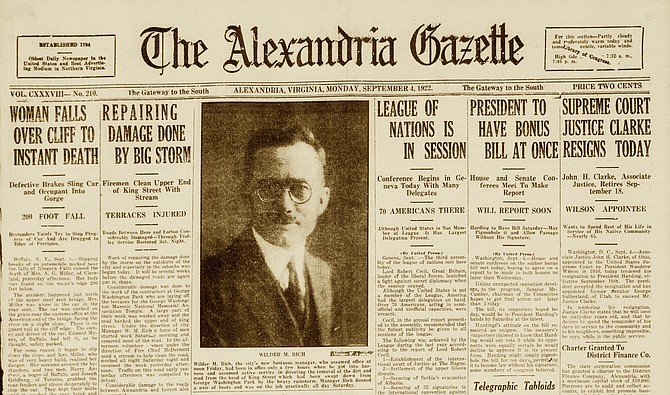 Alexandria's first city manager was Wilder Rich, a native of Michigan who had been serving as city manager in Goldsboro, N.C. when he arrived in Alexandria. The Alexandria Gazette welcomed him with a splashy front-page photo.

Common Council meetings ended when a quorum of members failed to show up. Half the police force was missing in action rather than patrolling the streets. The superintendent of gas couldn't get most of his employees to show up, and so those who dragged themselves into work were forced to work 36-hour shifts to fill in for their deadbeat colleagues. Money was appropriated to improve city roads, but City Hall couldn't find any laborers to work the streets.

In short, Alexandria was falling apart.
It was the summer of 1918, and the old ways of organizing the city's government were no longer working. Something needed to happen, and so the Alexandria Gazette began a series of articles that eventually led to the creation of a city-manager form of government. The inaugural effort was an editorial titled "Derelict City Fathers" that blasted the city for rank incompetence.


"This general derangement of industrial conditions shows no sign of change," the Gazette wrote on Aug. 21, 1918. "In fact it appears to grow more serious all the time."
At the time, Alexandria was organized in four wards under a charter written in 1871. The city had a Common Council with 16 members, four from each ward elected to one-year terms. It also had a Board of Aldermen with eight members, two from each ward elected to two-year terms. The mayor and four aldermen sat for a Court of Hustings that was sort of like a small-claims court that heard cases worth less than 1,000 pounds of tobacco. All of this happened in the absence of professional management after elections that included a dizzying array of candidates.
"A generation ago, reformers exercised their wits to devise complications of governmental machinery in a vain endeavor to prevent bad government," the Gazette explained on Sept. 30, 1921. "Today the winning principle is to simplify and clarify the processes of government so that everybody can and will understand and take part effectively."

Forcing the change wasn't easy. Advocates for a city-manager form of government got their first shot in September 1919, but they lost. Undeterred, they kept moving toward the goal. The city was horribly managed. It spent more money than it took in, and it was borrowing money without an administrative head to direct business affairs. The mayor had veto power over both the Common Council and the Board of Aldermen, so gridlock was inevitable. The Gazette argued that the convoluted system of checks and balances led to distrust and inaction.

"The present plan is not suited to the present age, when organization and coordination are necessary to meet the pressing needs of our city," the Gazette concluded on Sept. 27, 1921. "The powers of government are too much divided and scattered to accomplish definite and beneficial results."

The city manager form of government was presented as a solution to the moribund turmoil that was paralyzing the city. A new City Council would be elected with a "short ballot," allowing voters to focus their attention on a handful of candidates rather than a never-ending parade of politicians. The new City Council would select a professional city manager who had experience running other cities. The Gazette devoted many column inches to outlining examples of the 154 cities and 70 towns across the United States that had adopted a pro to administer business affairs.

One of the biggest changes was ditching the old ward system.

"The council will represent the whole city and not any particular ward or section, and are more likely to conduct the affairs of the city from a comprehensive view of the whole situation." the Gazette argued because at-large members will "plan all public improvements and betterments with a definite view to the  benefit of the whole community."

"The new council is going to appoint an experienced and, we believe, a thoroughly competent city manager and expects to devote it's time to the business of the city rather than to political questions or social functions," noted Edmund Ticer, the only member of the old Common Council to run for election in the new City Council.

That first city council, which was elected in 1922, had some very familiar names. The new mayor was William Smoot, whose name appeared in the Gazette as vice president in 1918 when the newspaper started blasting "derelict city fathers.”

The last names of council members reads like a who's who of Alexandria politics even today: Edmund Ticer, Thomas Fannon, Arthur Bryant and Robert Jones. The first city manager was Wilder Rich, a native of Michigan who was acting as city manager of Goldsboro, N.C. He began work by getting his hands dirty and helping the city dig out of a storm, literally and figuratively.

"He got into harness and assumed active service in directing the removal of dirt and mud from the head of King Street, which had been swept down from George Washington Park by the heavy rainstorm," the Gazette noted, including a splashy front-page photo of the new city manager. "Manager Rich donned a pair of boots and was on the job practically all day Saturday."