The grand ride kicks off from Woodlawn’s Pope-Leighey house, showing off the sights of Mount Vernon. 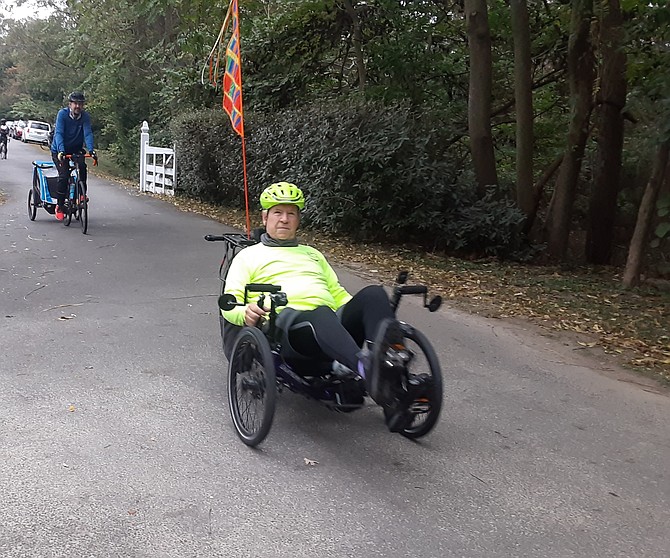 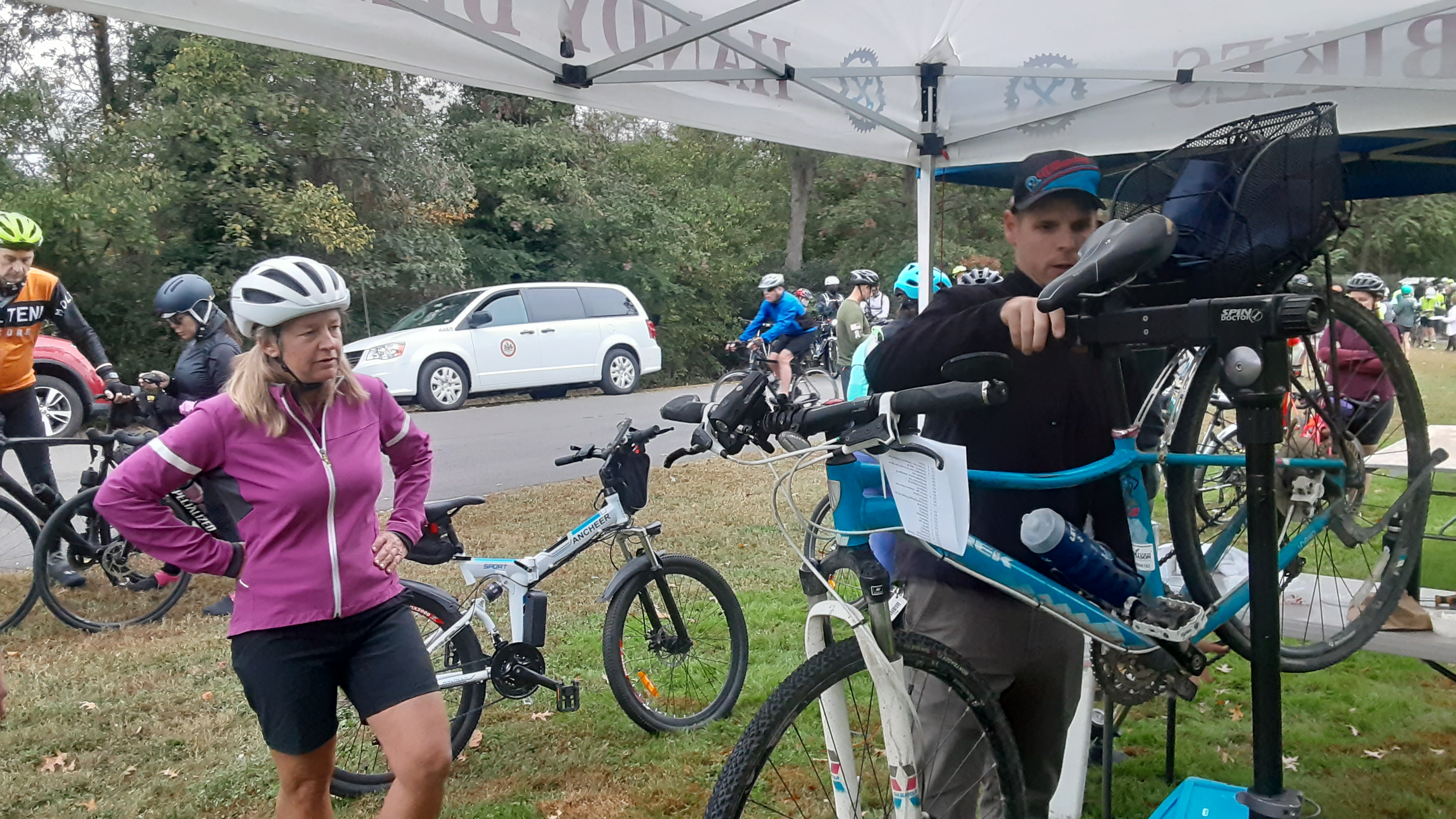 A derailer tune-up by Tyler Worosello, of Handy Bikes, is vital before the rider leaves the parking lot.
this year’s event to Dave Evans, a friend of Storck’s that died recently. Evans owned La Prima Catering, and in the past rides, Evans would be there at the end with food for everyone. “He was my best friend for more than 50 years,” Storck said.

Each rider was registered, and since the ride went onto Fort Belvoir, the riders needed to bring their identification, they were told as they signed up at the main tent. Other entities with tents at the Pope Leighey House were the Fairfax Alliance for Better Bicycling (FABB), the Mount Vernon-Lee Chamber of Commerce, Bike Fairfax, Spokes and Handy Bikes. “This is the biggest ride we ever had, over 300 riders,” Storck said. 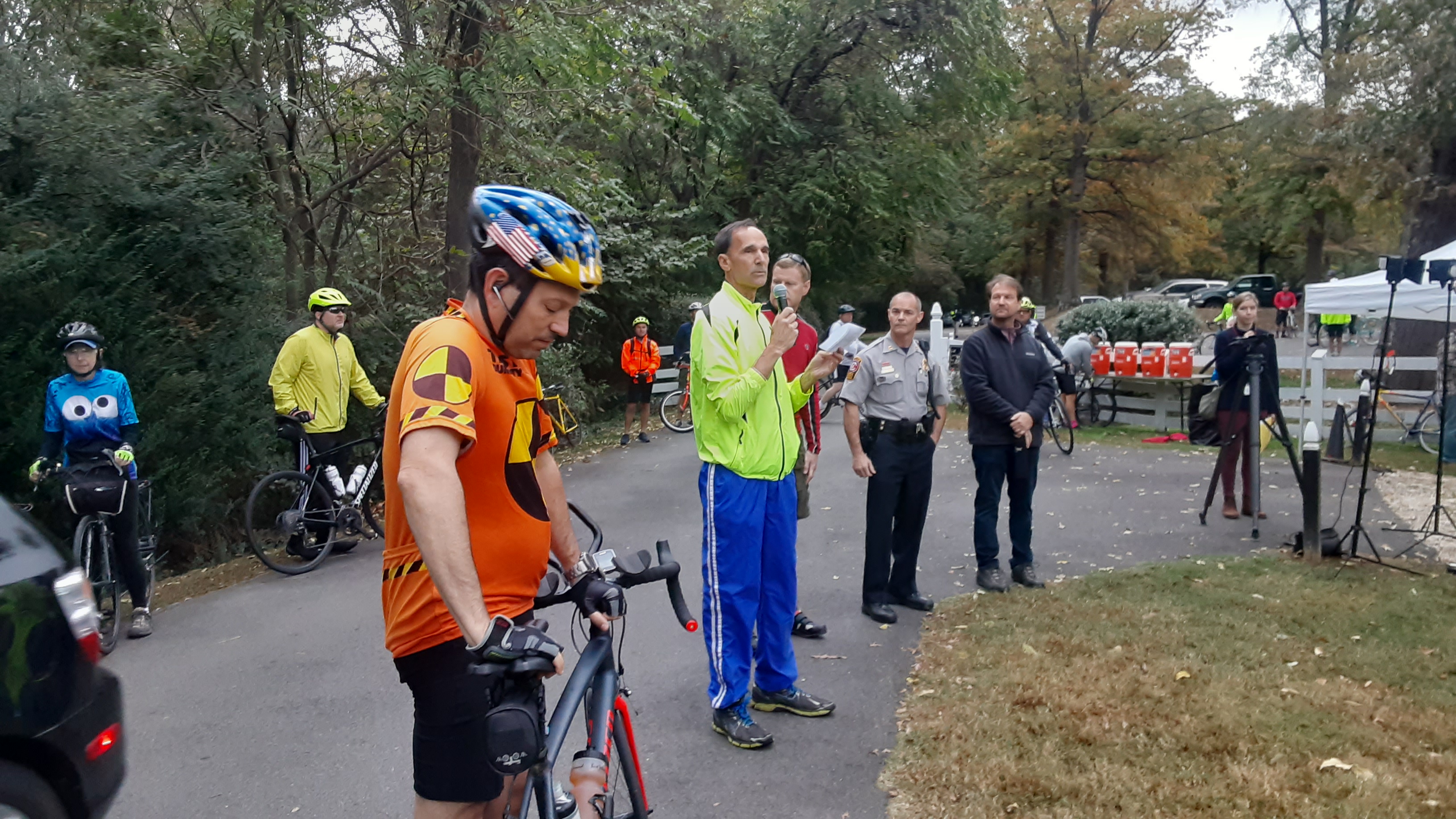 In previous years, the tour kicked off from Fort Hunt Park and the Workhouse Arts Center in Lorton, so using the Pope-Leighey parking lot as the launching site was a way of spreading the attention around in Mount Vernon.

Jeff McKay, chairman of the Fairfax County Board of Supervisors, was one of the riders along with Virginia Sen. Scott Surrovell (D-36). They both grew up in Mount Vernon and knew the route well.

Riders Wayne Thompson and Martine Collin were part of the group. They had just moved here from Montreal where they rode in an island tour, which was similar to the day's ride.

“We’re new to the area so we thought it would be a great opportunity to see the sights,” Martine said.

Rick Shaver rode a recumbent bike that he had ridden previously on a 1,800 mile trip from Canada to Southern California. The recumbent allowed him to sit back in a chair while pedaling. “I like it uphill better,” he said, “I use different muscles,” he added.

The tour was divided into a shorter route of 21.2 miles, and the longer ride of 41.4 miles. Both rides went by George Washington’s Mount Vernon and along the river but the shorter ride went inland, along Collingwood Road, through Gum Springs, down Pole Road and Jeff Todd Way, back to the Pope Leighey House. The longer ride went all the way along the George Washington Parkway to Old Town, Alexandria on the north end, and through Fort Belvoir to Gunston Road on the south end. Those riders went past the National Museum of the United States Army.

The riders went past the River Farm, which Storck mentioned before leaving the parking lot. “For those of you that don’t know, we saved the River Farm this year, we’ll go riding past that too,” he said.

The riders ended at the Pope-Leighey House where there was music, food and beverages. 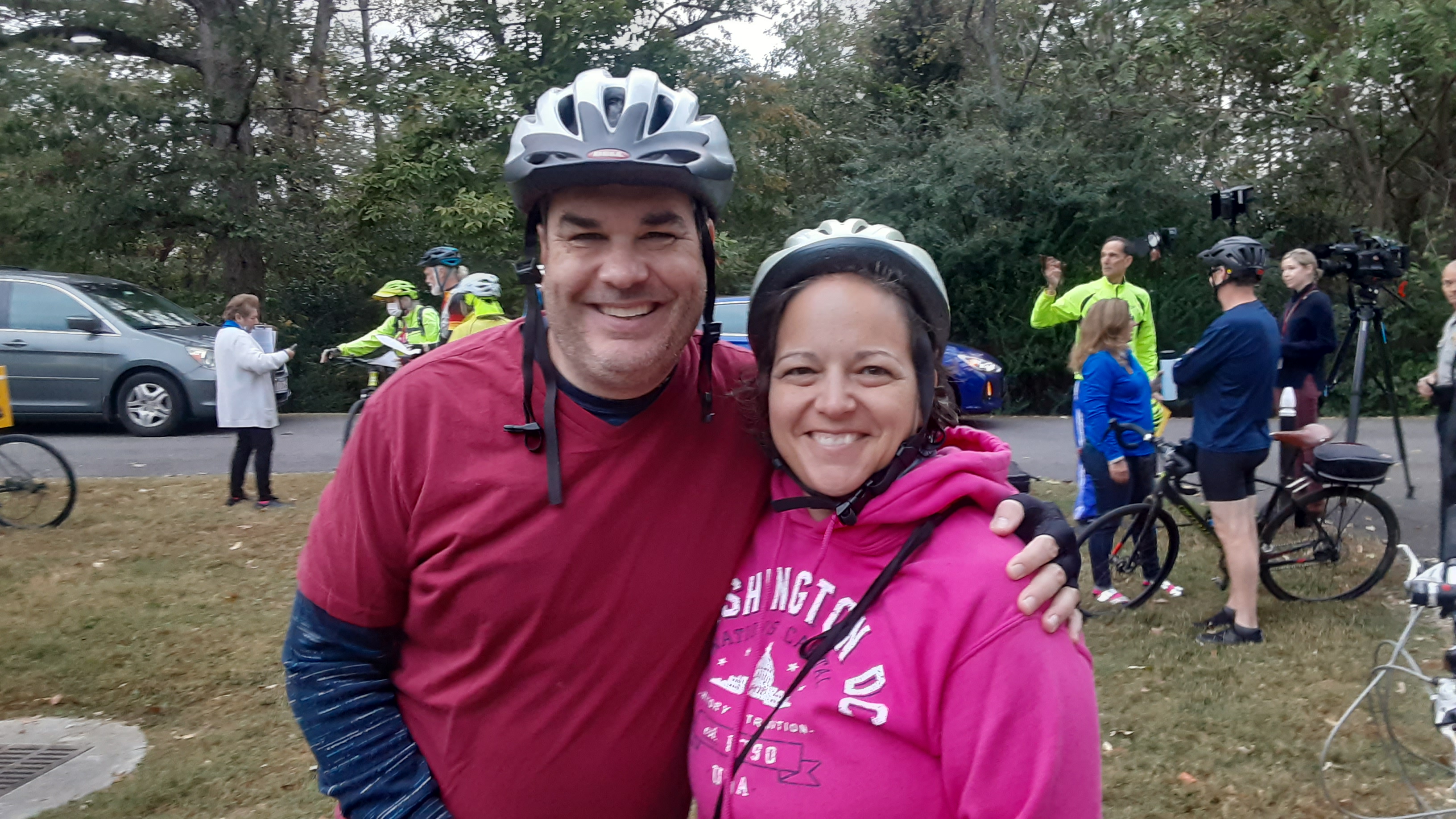 Shawn Halifax, the new executive director at Pope-Leighey, was on hand to see the riders off that morning. “It’s a great opportunity this year to showcase Pope-Leighey. Supervisor Storck has done a great job of showcasing the cultural resources here,” he said.

The Pope-Leighey House was designed by Frank Lloyd Wright in 1940 as part of Usonia, a term used by Wright to refer to the United States.

There were about 100 of these homes designed as affordable middle-class residences. Commissioned in 1939 by Loren Pope, a journalist in Falls Church, the residence was sold to Robert and Marjorie Leighey in 1946. It was moved twice — once because of highway expansion, and the second move due to instability of the clay soil so it was relocated about 30 feet up the hill in 1995.