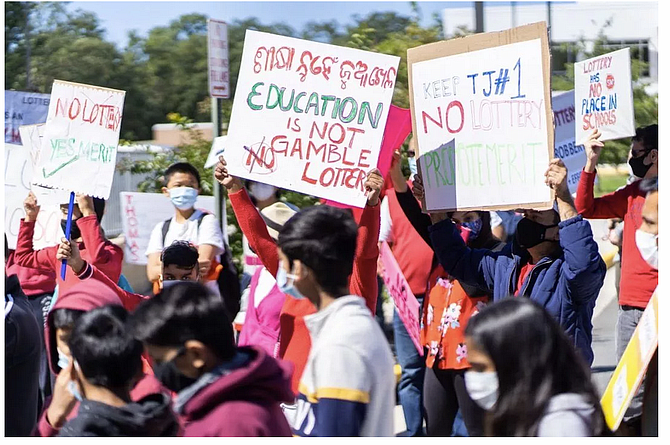 On April 8, Pacific Legal Foundation, counsel for Coalition for TJ, filed an emergency request in the Supreme Court of the United States in the case  Coalition for TJ v. Fairfax County School Board. According to the coalition's lawsuit, the admissions process is designed to reduce the number of Asian American students admitted to TJ, violating their constitutional rights. The case is to vacate the March 31 stay pending an appeal by the United States Court of Appeals for the Fourth Circuit (No. 22-1280) by U.S. District Judge Claude Hilton.

Erin Wilcox, an attorney with Pacific Legal Association, speaks after filing the lawsuit on March 10 on behalf of Coalition for TJ.

"The Fourth Circuit's decision to allow TJ's discriminatory process to continue will cause significant harm to the students who are going through the admissions process for the next school year," said Pacific Legal Foundation attorney Glenn Rope in a statement on April 8.  "The district court decision found a clear constitutional violation, and we hope that the Supreme Court will agree that this stay should be vacated, and the discriminatory process halted while the case proceeds."

TJ is an elite magnet school. As the Virginia Governor School for Science and Technology in Northern Virginia, the Virginia Department of Education supports the school. Fairfax County School Board administers the program and TJ serves other school districts, including Arlington, Loudoun, Prince William counties, and the cities of Fairfax and Falls Church. TJ has been named among the best high schools in the country.

On March 31, 2022, a three-judge panel of the Fourth Circuit Court of Appeals, under the direction of federal Judge Toby Heytens and concurred by Judge Robert King, voted 2-1 to grant a stay pending an appeal to the Fairfax County School Board (the School Board) and Scott Brabrand, in his official capacity as Superintendent of the Fairfax County School Board, against Coalition for TJ. Judge Allison Jones Rushing, the panel's third judge, voted to deny the March 31 motion.

The 4th Circuit order on March 31 did not overturn the  U.S district court's decision by Judge Claude Hilton Feb. 25, 2022 disallowing the new admissions policies. But the order was put on hold while considering the school board's appeal.

The School Board may continue to use the challenged admissions plan for students applying to TJ, according to the March 31 judgment.

Coalition for TJ issued a statement following the 4th Circuit judges' 2-1 decision, stating that "Judge Toby Heytens and Judge Robert Bruce King of the Fourth Circuit Court of Appeals have made a grave error in allowing Fairfax County Public Schools to continue its illegal admissions process that discriminates against Asian American students applying to Thomas Jefferson High School for Science and Technology. If the judges' decision stands, we would see Fairfax County Public Schools usher in a second class of students to America's No. 1 public high school through an unconstitutional race-based admissions process."

Judge Heytens filed a concurring opinion for the March 31 vote, writing in part, "I believe the public interest favors a stay given the timing and logistical constraints inherent in repealing the current admissions policy and implementing a new one so close to the end of the current admissions cycle. Thousands of students and their families will be thrown into disarray for the next several months if the district court's order is not stayed."

On Oct. 25, 2021, applications for the TJ Class of 2026 opened with applications due by by Dec.15, 2021. Students should receive notification of their admission status this month, April 2022, according to FCPS.

In her dissenting opinion, Judge Rushing stated, "Everyone — even temporarily frustrated applicants and their families — ultimately benefits from a public-school admissions process not tainted by unconstitutional discrimination."

According to Judge Heytens, undisputed data presented to the district court demonstrate that a higher percentage of Asian American students were admitted than applied, even under the current plan. He wrote in his opinion, "Taking all this into account, it seems the more prudent course is to allow the current admissions cycle to proceed according to settled expectations and require a change, if any, beginning with the next class."

Thomas Jefferson High School for Science and Technology admissions had been questioned for decades because of the demographics of the  student body which included only a tiny percentage of economically disadvantaged students.

Numbers of Black and Latino students were also very low. The admitted class of 2019 was 2.4 percent Hispanic, 1.6 percent Black.

In 2003, nearly 20 years ago, the Fairfax County School Board established a Blue Ribbon panel of experts to study the disparities and make recommendations. But revamped admissions policies made little change in the disparities.

Every middle school in the Fairfax County Public School division was represented at TJ as seats in the Class of 2025 were allocated for the top 1.5 percent of applicants from every middle school’s eighth-grade student population. Students from historically underrepresented schools increased to 30.73 percent versus 5.56 percent (2020-21).

The Coalition for TJ filed a federal lawsuit against the School Board with the help of the Pacific Legal Foundation, claiming that the School Board's changes were specifically designed to reduce the percentage of Asian American students who enroll at TJ, to equalize the school per Fairfax County's racial demographics.

The New York Times reported that the Pacific Legal Foundation is behind multiple lawsuits that challenge elite public high schools changing their admissions policies to diversify their student body. https://www.nytimes.com/2022/02/16/us/school-admissions-affirmative-action.html?smid=url-share

In February, a federal judge struck down the new admissions policy. But late in March, the U.S. Court of Appeals issued a stay, allowing the current applications, already in process for the class of 2026, to move forward under the invalidated admissions process.

According to Pacific Legal Foundation, the Supreme Court is expected to rule on the coalition's emergency request in the coming weeks.